Home » Columns » Abracadabra By K. B. Ganapathy » Devaraja Market and Lansdowne buildings: ‘To be or not to be’ dilemma faced by the authorities 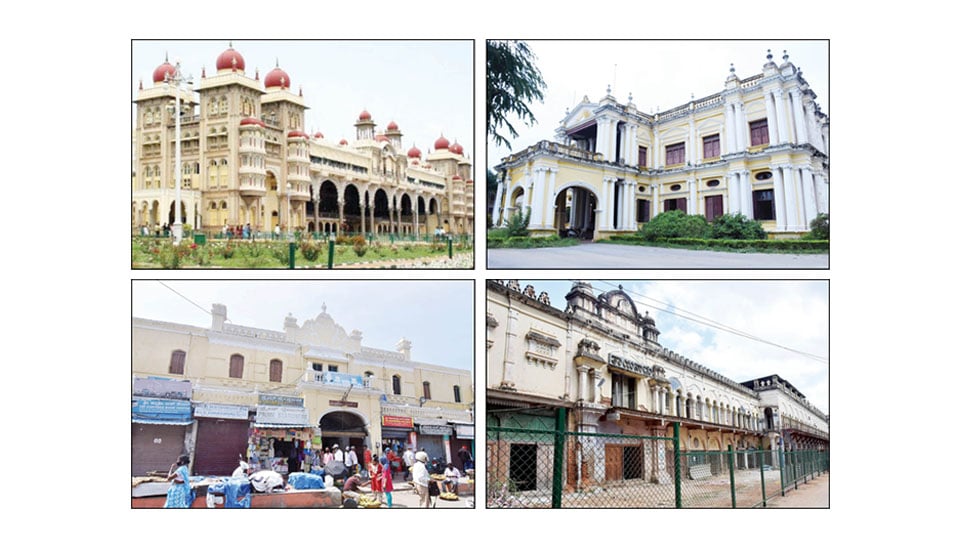 Devaraja Market and Lansdowne buildings: ‘To be or not to be’ dilemma faced by the authorities

The Mysuru District Heritage Committee presided over by its Chairman Dr. Bagadi Gautham, who is also the Deputy Commissioner (DC) of Mysuru, took a very special and important decision in its meeting held on 14th of this month. The decision was to demolish over a hundred-year-old Devaraja Market building and the Lansdowne building, considered heritage buildings but in a highly dilapidated and collapsible condition.

It was decided that after demolition these two buildings would be constructed anew, keeping its architectural features. Many of those who have been following these two ‘sick’ buildings that were in ‘death beds’ for over a decade, expressed their countenance to this most realistic and even futuristic decision. After all, the authorities need not worry about these reconstructed buildings for another 100 years if the tenants therein co-operated in maintaining these buildings. Let it be.

Surprisingly, when this news came out in the newspapers, for some vested interest groups it was as if the hell had broken loose and come down. They wanted these buildings to be repaired and restored as heritage buildings and conserved as such.

While many have expressed their opinions for and against this decision, one Nagendra of Vidyaranyapuram has made a very pertinent point in response  to those who wanted restoration of these two buildings; not demolition and reconstruction.

Imagine what would happen if the building collapses and disaster takes place like it happened earlier during monsoon taking away four lives. In such an eventuality, there is a risk not only for the shop-keepers but also to the customers who go there. They may lose their lives or break their bones.

The fact that a part of the Devaraja Market building had collapsed after some conservation work was done, as per the advise of the consultants on heritage building conservation, is proof that there is no guarantee the same tragedy will not happen if the building is repaired and restored.

After all, some Civil Engineers say the building is beyond repair and restoration considering the materials used those days for constructing these buildings.

By the way, after these buildings are renovated or repaired and allowed to remain as monuments for the tourists, would the tourists (who have seen the world) find anything extraordinary aesthetically to wonder and admire? Then, will it not amount to our City Corporation denying its tax-payers the most important infrastructural facility in the heart of the city? Time to ponder over this question also.

Already, Yaduveer Krishnadatta Chamaraja Wadiyar of the Mysore Royal family has joined those who were protesting against the decision of the Mysuru District Heritage Committee. Majority of those who were in the protest meeting were those who are the owners and tenants of the shops therein. They had even closed the market for half-a-day from morning till 2 pm in the afternoon.

Added to this, the Mysore Royal family has in great flourish said that if the Government permits, they would repair these two buildings preserving their heritage character.

In that protest meeting it was also said, if it was the way the Mysuru District Heritage Committee took the decision regarding the heritage buildings, then one day in the future, even the Mysore Palace might be demolished.

Public memory could be short as they say. But, let it not be forgotten that there is some truth in the saying ‘Time and tide wait for no man.’ As I remember, some years back, an IAS Officer, I think, of the Archaeological Department had declared that the public Durbar Hall of the Palace where music programmes used to be held with hundreds of people seated on either side of the main stage, that the Durbar Hall cannot take the weight of so many people as its flooring is structurally weak due to age. Much discussions were held about this IAS Officer’s opinion. However, finally, the authorities accepted the opinion of the IAS Officer and stopped holding the music concerts from this venue. What does it suggest?

READ ALSO  Kodagu, Playground of Karnataka: Is it under threat of disaster ?

The same fate is facing the Jayalakshmi Vilas Mansion in Manasagangothri. This building was constructed in 1910. Due to reasons of non-maintenance, the Mansion became dilapidated and was in the danger of collapse. When this condition of the heritage building was brought to the notice of Sudha Murty, the then Chairperson of Infosys Foundation, she pumped in a few crores for its restoration in the year 2004-05. Sadly, the building has returned to its pre-restoration condition now and the Government is likely to spend some more crores to restore this building as it wants to shift the Classical Kannada Language Centre to this Mansion. Wonder how long this patch-work business will last, GOK.

Be that as it may, talking about Devaraja Market and Lansdowne buildings, the authorities should give up the mindset of the Prince of Denmark in Shakespeare’s play ‘Hamlet’  — “To be, or not to be, that is the question.”

2 COMMENTS ON THIS POST To “Devaraja Market and Lansdowne buildings: ‘To be or not to be’ dilemma faced by the authorities”