Home » News » Dilemma over an injured elephant at Dubare Camp 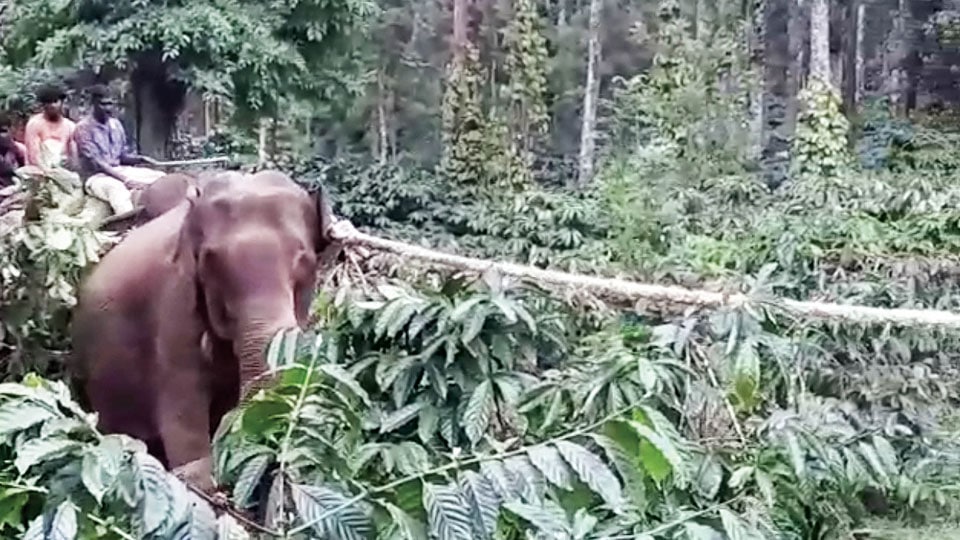 Dilemma over an injured elephant at Dubare Camp

Kushalnagar: An elephant, whose right hind leg is broken, is recuperating at the Dubare Elephant Camp near Kushalnagar. Though initial reports said that the injury was sustained when the pachyderm was captured in the last week of May, Forest officers said that the elephant was injured three months ago and it is now being taken care by the Forest Department.

However, some senior officers of the Department are in favour of shifting the elephant, aged about 15 to 16 years, to Kabini Reserve Forests, much to the chagrin of wildlife activists who are against this move. They said that if the injured elephant is left inside the jungle, it will die a slow death out of hunger.

This elephant was a part of the herd that frequently raided crops across villages in and around Cheyandane. The Department subsequently got permission to capture three wild elephants. Accordingly, the operation was conducted in the last week of May to capture the three jumbos.

While one jumbo died allegedly due to an overdose of tranquillisers, the other is this female elephant. During the operation, the tourist spot of Chelavara Falls was off-limits to the tourists.

It was one of the most tedious operations and the area was full of slopes amidst coffee estates, and one small mistake would have sent the injured elephant packing down the slopes. Somehow they managed to bring the elephant to Dubare on May 29 at 3 am and it was put inside a kraal (wooden log enclosure).

No scope for surgery

Initially, the Department officers said that the elephant has to be operated on. But as the veterinarians said that the injury was sustained three months ago and as such, flesh has grown on the fractured part, the Department shelved the idea of surgery. The pachyderm now limps to walk and was unable to catch up with its herd.

“The herd waited for this elephant for three days and have now headed towards Kerala via Bhagamandala. The right hind leg bone is dislocated and flesh has covered the area and it is risky to operate. As it was limping, it could not feed well in the wild and we are doing our best to feed and take care of it,” Range Forest Officer Shivaram told Star of Mysore.

However, senior forest officers are against the idea of keeping the elephant in Dubare. They are exerting pressure to shift the elephant to the wild in the Kabini range. Sources said that each day, the Department requires Rs. 5,000 to Rs. 7,000 to feed one elephant and with the Government funds hard to come and with the irregular release of money even for routine tasks at the Dubare Camp, it will be difficult to bear the extra burden of this injured elephant.

But wildlife activists are against the shifting as the elephant is injured and is not in a position to fill its tummy on its own due to the bone dislocation. “If your family member falls ill, will you leave her/him in the forest,” questioned Wildlife First head K.M. Chinnappa, a decorated Forest Officer, whose lifetime effort significantly contributed to the growth of Nagarahole Tiger Reserve.

“The Forest Department must shoulder the responsibility and not think commercially every time. Karnataka’s elephants are its responsibility and it must take care of the injured elephant at Dubare and give it food and medical care. Shifting it to Kabini will kill the elephant and precious life is lost,” Chinnappa added.

Some mahouts in Dubare, on condition of anonymity, said that the elephant is young and can easily be tamed. “Of course, it limps and by its looks, it has adjusted to the injury and is efficiently using its three legs. With proper medical care, protection from rain and good food, the injured pachyderm can see a new life,” a mahout said.