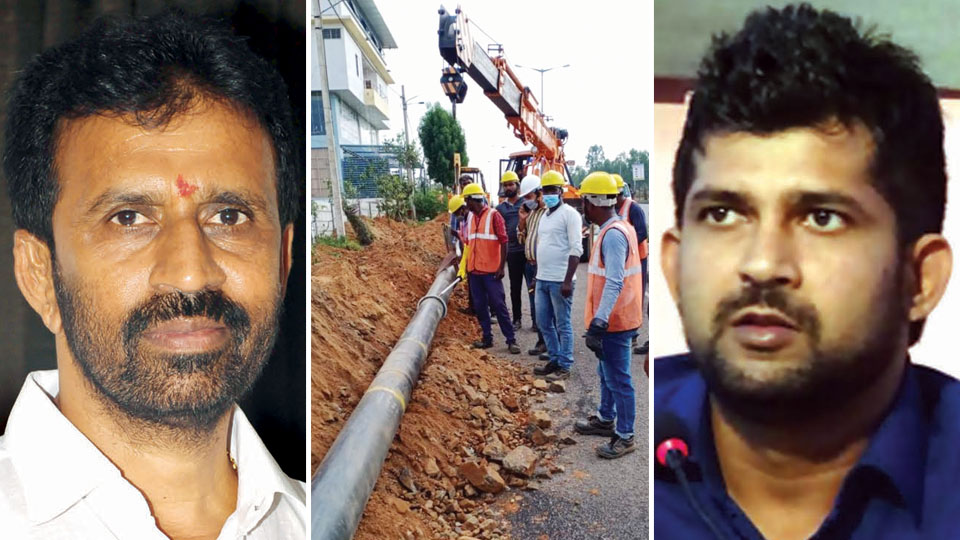 Mysore/Mysuru: The public squabbling between the BJP elected representatives — Mysuru-Kodagu MP Pratap Simha, MLAs L. Nagendra and S.A Ramdas — over the Piped Natural Gas (PNG) project in Mysuru has continued with the leaders hitting back at each other and digging up more dirt in full public view.

While Ramdas has not reacted to the latest statements by the MP, Nagendra did not mince words and retorted sharply to the MP’s charges and allegations that date back to the previous Lok Sabha elections. A formal complaint has already been lodged with the BJP State leadership in this regard and Chief Minister Basavaraj Bommai has offered to mediate between the warring parties over a people-friendly project.

The bone of contention (available for public consumption) is digging of the roads where the MLAs have expressed concern on the restoration after the digging works. The MLAs claimed that the Corporators, who come face to face with the voters every other day, do not have visibility to the project while the MP is in a tearing hurry to pass the bills from the Corporation.

“Officials told me that more than 500 km of the roads in the city, mostly in Chamaraja Assembly Constituency will be dug up for the project but the amount of money set aside for repair of the roads was just Rs. 98 crore. This amount is barely enough for patchwork on the roads that had recently been laid. Is Mysuru a patchwork city,”     Nagendra asked.

Corporators and MLAs do not have any knowledge about the company which has taken up the piped gas project. No one has been informed and many new roads have been unilaterally dug up, he said.

“Recently in Visakhapatnam, 14 people died due to a gas leakage. The company must give a demo on the work and clarify on who will be repairing the roads which will be dug-up to lay gas pipelines. And why the MP is showing special interest in the company entrusted with the project. Why is the company not ready to disclose the project details even to the Minister? Why is there no transparency in a public project,” MLA    Nagendra asked.

“The MP is jumping to the defence of the company executing the project but has no intention of explaining the project to the Corporators and the MLAs. As an elected representative I have every right to raise questions over the damage to the roads and I have written only as much in the letter to the MCC authorities. I will hold somebody accountable for the repair of the roads dug up,” he clarified.

MP election and other issues

“Simha never contested any local body elections but won the Lok Sabha election by sheer luck while I have served as a Corporator and worked hard to become an MLA. Let him prove his capacity by winning a Zilla Panchayat election from his native place,” the MLA said.

“During the Lok Sabha election, Chamaraja voters (my Constituency) gave the highest votes to Simha appreciating my development works. Everyone knows how you failed to ensure the victory of the BJP MLC candidate R. Raghu Kautilya and the MCC Council candidates. Pratap Simha himself had    issued tickets to several of his followers in the MCC elections. Was he able to ensure their victory?,” he charged.

Reacting to Simha’s statement that his work can be equated to the work done by the Mysore Maharajas, Nagendra said, “What is the need for the MP to talk about so many things other than the topic? Do not compare yourself with the Maharajas. No politician ever can initiate development projects like them. You did not even get a Smart City project to Mysuru,” he said.

Displaying a list of works taken up in his Constituency at a cost of Rs. 526 crore since he was elected to the Legislative Assembly in 2018, Nagendra countered the charges levelled against him by the MP that he was not able to bring even Rs. 30 crore for development work of Chamaraja Constituency.

13 COMMENTS ON THIS POST To “‘Direct to home’ piped gas project: Row over road-digging deepens”