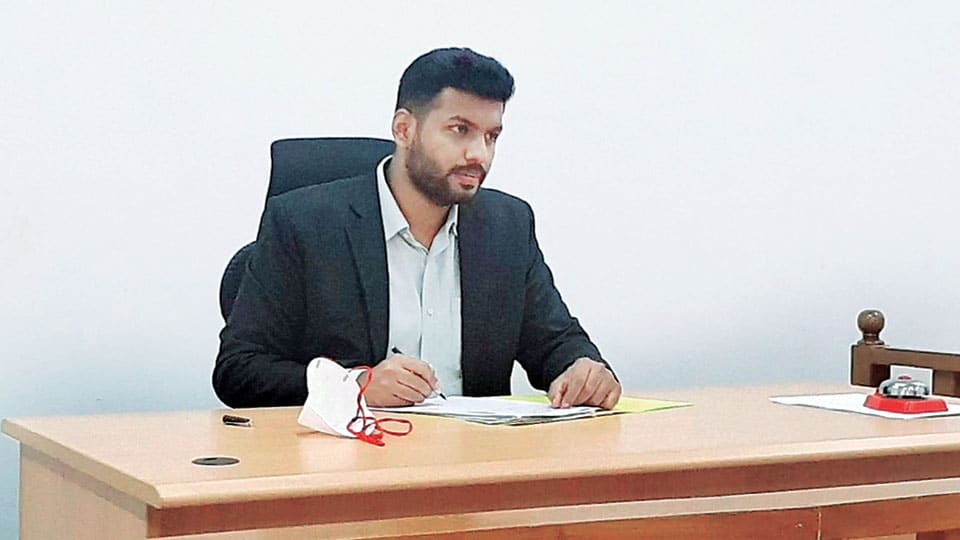 Being born and brought up in Mysuru, he considers himself fortunate to serve as Tahsildar of Mysuru taluk. Holding Gram Panchayat (GP) elections without any law and order problem and clearing rampant encroachment of Government lands were the two major challenges before this young and dynamic KAS Officer of 2014 batch, who took charge as Tahsildar on Jan. 6, 2020 in a politically sensitive region frequented by VIPs and VVIPs.

A native of Kiragandur in Mandya district, he says  managing the visit of VVIPs as per protocol is the biggest responsibility. There are occasions when he has worked even on general holidays. Because of this, he has not been able to give more time to family. Meet 30-year-old K.R. Rakshith, who had a free-wheeling chat with Star of Mysore. Excerpts. —Ed

Star of Mysore (SOM): In the last two decades, land value has sky-rocketed in Mysuru. Tell us about your action plan for effective curbing and clearance of land encroachments?

K.R. Rakshith (KRR): Every document in Taluk Office is made available only through Survey, Settlement and Land Records Department. All records are not yet computerised and the office is under CCTV camera surveillance. All landed Government properties in the taluk are being collated and checked by local staff. In case of any encroachments, immediate steps are taken for evictions as well as measures to reclaim the Government property. Ever since I assumed office, we have cleared encroachments of 64 burial grounds and 20 lakes in the taluk besides digging trenches to prevent fresh encroachments. Due to pandemic, we have been facing some difficulty in accomplishing our tasks but I hope in the coming days, we would be able to carry out the same on expected lines and in a more effective manner.

SOM: What action will you initiate to clear encroachments of Government lands including Gomala, Raja Kaluves and Conservancies?

KRR: From the day I took charge as Tahsildar, I am collecting all information from the executive staff and taking steps for clearance of encroachments.

SOM: Are you getting co-operation from your staff members in your drive against encroachments?

KRR: After assuming office, citizens were requested to share information regarding encroachment of Government land through writing or orally. Accordingly, priority is being given for the clearance of encroachments as well as protecting the same. All my staff are with me in this regard.

SOM: What about co-operation from elected representatives? Are they interfering in your work?

KRR: All the elected representatives in the region are co-operating with our Department. No one is unnecessarily interfering with the Taluk Administration.

SOM: What steps have you taken to motivate your workforce to perform duty in a disciplined manner, prevent undue delay in attending to public work and curb corruption?

KRR: Discipline at work is our first priority. Priority is also given to clear pending files. During monthly meetings, the staff are regularly instructed to carry out their duties in a disciplined manner. We have also displayed messages on the notice board and at various points in our office premises asking the public not to grease the palm of anyone.

SOM: What is the system to issue RTC, MR, land records and social security benefits?

KRR: Mysuru taluk, which includes Mysuru city, is a densely populated region. Hence, we have opened an Information Centre at the Taluk Office so that public have easy access to all their documents such as RTC  (Records of Rights, Tenancy and Crops) and MR (Mutation Register). Similarly, we have been taking all necessary steps to provide social security benefits to targeted beneficiaries in a  stipulated time.

SOM: Share with us your experience on handling legal hurdles in Taluk Administration.

KRR: Pending Court cases and delay is, of course, a widely acknowledged issue. Compared to other taluks, Mysuru taluk has the highest number of land dispute cases pending before Civil Courts, High Court and the Supreme Court. According to orders issued by the Government, the Tahsildar is empowered to function as Dispute Redressal Officer in most such cases. I have been executing my duties accordingly and at the same time facing some challenges due to time constraints.

SOM: What are the challenges you faced during the recently held Gram Panchayat (GP) elections?

KRR: As GP election is the main election in rural areas, preparation of error-free voters list was a major task for us as each vote was counted. In two particular Constituencies, as the candidates had secured equal number of votes, the winner had to be decided by draw of lots. As counting of votes is crucial in deciding the fate of a candidate, there was a great challenge before the Taluk Administration in handling 1,500 candidates and another 1,500 polling agents apart from the counting staff at the counting centre without any law and order problem. Thanks to the co-operation of Police personnel on duty, everything went on smoothly.

SOM: What farmer and citizen-friendly administrative measures you have taken?

KRR: I have been holding Revenue Adalat and Pension Adalat at Panchayat-level on a regular basis to find solution to the problems faced by farmers in getting land records such as RTC, etc. Through these measures, I think, our administrative system has come closer to the people, with Government facilities easily reaching the rural beneficiaries at their doorstep.

K.R. Rakshith had his High School education in the famed Sri Ramakrishna Vidyashala in Yadavagiri, Mysuru; PUC in Sadvidya College and completed BE (Electronics & Communication) from Vidyavardhaka College of Engineering (VVCE), Mysuru.

A  2014 batch KAS Officer, after his probationary period in Mysuru district, Rakshith worked as Harihara Tahsildar for four months and Sakleshpur Tahsildar for one year, before taking charge in Mysuru.

Son of K.H. Ramesh and Kalpana, native of Kiragandur in Mandya district, Rakshith is married to Pallavi, an Orthodontist and the couple is blessed with a four-month-old baby boy Parth. Presently, Rakshith resides at Yadavagiri.