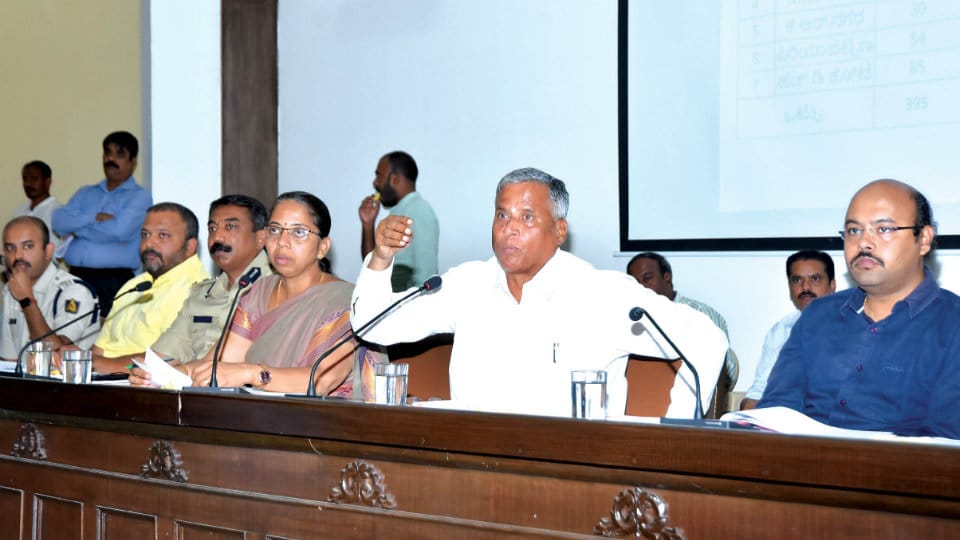 Mysuru: With Mysuru being one of the flood affected districts in the region, District Minister V. Somanna on Thursday directed officials to distribute flood relief money to the affected victims in a transparent manner.

Speaking at a meeting to discuss flood relief works and crop loss in the district at the ZP Hall here yesterday, Somanna asked the officials to identify the genuine flood victims and provide them relief from the released funds, as per the revised guidelines of the Government.

After receiving  inputs from the Tahsildars and Taluk Panchayat Executive Officers on crop loss and flood damages, the Minister instructed them to build new homes wherever the houses are fully damaged.

The officials told the Minister that 101.35 acres of crop were destroyed and 395 houses in the district collapsed due to heavy rains in October, with Mysuru taluk alone recording a crop loss of 13 acres and destruction of 115 houses. Also one person and 14 cattle lost their lives in the floods. The officials also said that Rs. 42.5 lakh has been distributed as relief to flood affected and an additional Rs.1.2 crore has been sought from the Government to meet compensation demands.

Asking the Agriculture, Revenue and Horticulture Department officials to visit all flood affected areas in order to get accurate statistics on the extent of flood damages and crop loss, Somanna asked them to finalise the list the victims and provide them relief as per the guidance of local Legislators.

Somanna instructed DDPI Panduranga to provide complete information on all dilapidated Schools and Anganwadis in the district by Nov.1.

READ ALSO  Proposal to set up AIISH Clinical Units in all Govt. Hospitals

Pointing out that the State Cabinet has agreed to release Rs.500 crore for repair and renovation of Government schools in the State, he asked Panduranga to prepare an estimate and submit an action plan to the Government in this regard.

The DDPI said that 385 Government Schools  and 254 Anganwadis in the district were in poor shape and required repairs, to which the Minister asked to visit all such Schools to know about the condition of buildings there.

Stressing on the need for expansion of Ring Road, Somanna said that all the layouts should be handed over to MCC for upkeep and maintenance. He asked the MCC and MUDA Commissioners to hold a meeting in this regard.