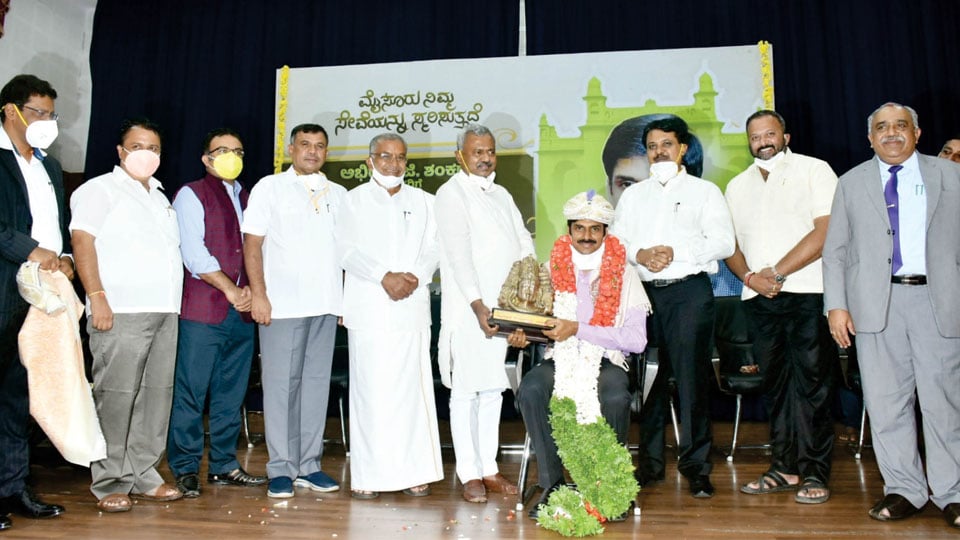 Mysore/Mysuru: Mysore Citizens Forum, on behalf of citizens, felicitated former Deputy Commissioner (DC) of Mysuru, Abhiram G. Sankar, who had earned the appreciation of people for his laudable services during COVID-19 and floods.

At a function held at the Vigyan Bhavan in Manasagangothri campus here yesterday, District Minister S.T. Somashekar felicitated him with traditional Mysuru peta, shawl and a memento.

Speaking on the occasion, Somashekar said the Dasara High Power Committee led by Chief Minister B.S. Yediyurappa has decided to get this year’s Dasara inaugurated by the Corona Warriors. Accordingly, Abhiram’s name will be considered for one of the inaugurators depending upon his availability. It was his privilege to work with such a wonderful officer but for a short duration.

As DC, he stuck to the  Government guidelines and the elected representatives too gave him full co-operation. Similar co-operation will be given to the new DC B. Sharat, he added.

MLA G.T. Devegowda said the previous DC had maintained a good relationship with lower rung officials and that helped in the district’s progress. The situation was quite tough in the district when he was posted as DC in 2018 as the then CM Siddharamaiah was facing the election. However, he discharged his duty impartially and won the laurels of people.

He said the previous DC successfully solved problems pertaining to acquisition of land for the extension of runway for the Mysore Airport and Hongalli Water Distribution Unit, by convincing farmers to part with their land. For officials, transfer is a continuous process and Abhiram has chosen other post in the interest of his career.

MLC Marithibbegowda complimented Abhiram Sankar for being simple and honest and effectively discharging duty as the Deputy Commissioner.

MUDA Chairman H.V. Rajeev also suggested to the District Minister to consider Abhiram Sankar’s name for the inauguration of Dasara-2020 along with four other Corona Warriors.

DC Sharat said he has a good relationship with Abhiram Sankar and will seek his suggestion for overall development of the district.

Replying to the felicitation, Abhiram Sankar said he had worked under three District Ministers — V.Somanna, G.T. Devegowda and Somashekar — and enjoyed a good administrative relationship. The Ministers used to give him suggestions at times of crisis. This had helped him to work to the expectation of everyone, he opined.