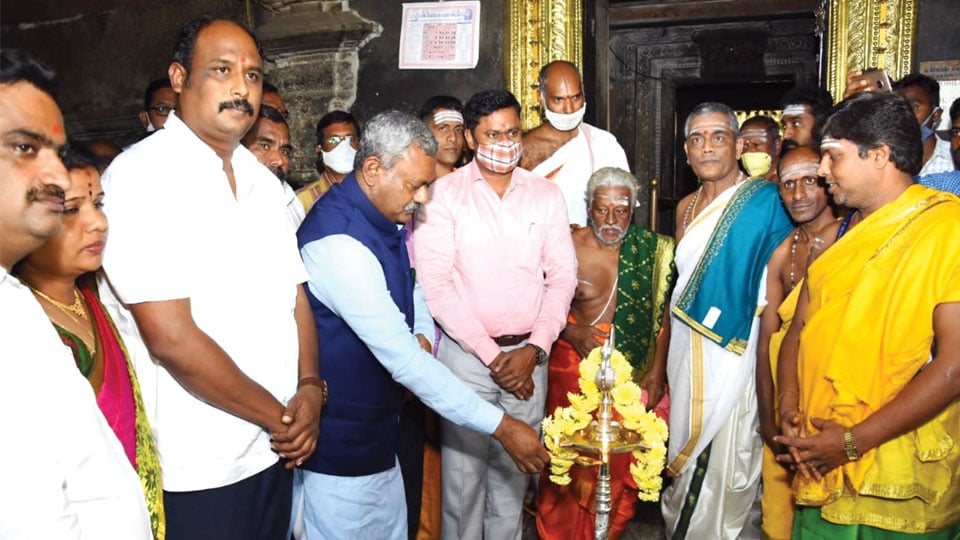 Mysore/Mysuru: The 10-day Panchalinga Darshan at Talakad in T.Narasipur Taluk of Mysuru District got off to a colourful start with traditional puja offered at illuminated Vaidyanatheshwara Temple by District Minister S.T. Somashekar last evening.

Speaking to media, he said COVID-19 Technical Advisory Committee has given permission for only 1,000 devotees per day on nine days and 1,500 on Dec.14 which is the most auspicious day. Devotees have been asked to come in batches and strictly follow safety protocol such as mask, hand sanitiser and social distancing.

Local MLA Ashwin Kumar had taken special interest in the preparations and Police had made elaborate security arrangements to check crowding of people. In 2013, an estimated 7 lakh people had attended Panchalinga Darshan but now it had been reduced drastically due to pandemic.

Somashekar said all development works were being done by Public Works Department this year. Temple Committee had sought Rs. 2.2 crore for a few emergency works and Chief Minister B.S.Yediyurappa had given his consent for all works.

The District Administration has sought Rs.2.2 crore which would be released soon, he said and added all religious activities were going on smoothly. Villagers have demanded works worth Rs.20 lakh to Rs.30 lakh and it had been referred to Departments concerned.

The Minister said that the Chief Executive Officer of Mysuru Zilla Panchayat had been asked to give compensation for those farmers whose land had been acquired for road widening work.

CM to have darshan

Chief Minster B.S.Yediyurappa will take part in the special puja to be held in the early hours of Dec.14. He will arrive in Mysuru on Sunday and then proceed to Talakad. Elaborate security arrangements have been made in connection with the CM’s visit.