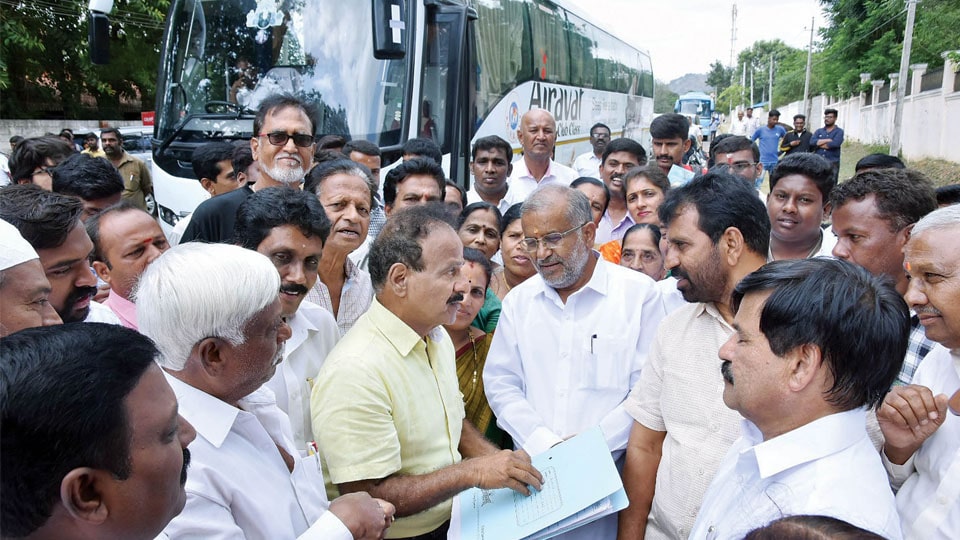 All the MLAs from city, including the District in-charge Minister G.T.  Devegowda, have been giving the same assurance ever since Siddharamaiah’s Cabinet took a decision in 2017 to help owners of MUDA allotted sites in Sy. No. 4 and Sy. No. 41 but without any relief. Today is July 2, 2019 and if you ask this Minister and MLAs on Aug. 2 after a month, according to a resident of K.C. Nagar, you will get the same answer saying that ‘this land row will be solved in a month’ and you will wait again for another month, September and till infinity… We may need a different kind of leadership to get this humane problem solved, says an aggrieved resident.

Mysuru: District Minister G.T. Devegowda (GTD) while undertaking a whirlwind tour of the city this morning along with the elected representatives and officials to personally check the problems and find solutions, assured the aggrieved residents of Kurubarahalli Survey No. 4 and Alanahalli Survey No. 41 that the inordinate delay in deletion of ‘B-Kharab’ classification of lands coming under CITB and MUDA, will be resolved within a month.

As soon as GTD reached the Kurubarahalli Circle, BJP National Council Member and former KEA Chairman B.P. Manjunath met the District Minister and asked him why in spite of the Cabinet decision on deletion of ‘B-Kharab’ classification of Kurubarahalli Sy. No. 4 and Alanahalli Sy. No.41, the Government had still not taken a decision.

Stating that he was aware of the problem, GTD said that the Revenue Department Principal Secretary Rajkumar Khatri had sent the file to Revenue Minister R.V. Deshpande and the matter will be solved within a month, he assured Manjunath.

Later, on reaching the Government Guest House where he had his breakfast along with the team of officials, Devegowda got a call from Khatri, who told him that he had sent the file related to the said land to Deshpande and the Minister confirmed the same to Star of Mysore.

GTD joined the city tour team at 7.30 am and first visited Vivekananda Circle that comes under K.R. Constituency where MLA S.A. Ramdas highlighted several issues that plague the Circle. He told the Minister that the old bus shelter at the Circle was a hindrance as there was no place to park the city buses. Hence, the buses had to be parked all around the Circle causing a lot of traffic problems.

Ramdas said that if the bus shelter is shifted back then all the five buses can be parked at the same place. GTD directed the MCC, MUDA and Police officials to prepare a DPR (Detailed Project Report) and see that the problem is solved at the earliest.

G.T. Devegowda and the team of representatives and officials next moved to Aishwarya Layout (private layout) in buses. This Layout is a private layout where the Raja Kaluve (Storm Water Drain) has allegedly been encroached and a park built. This has led to water clogging whenever it rains and as a result the sewage water sometimes enters the homes also, said Ramdas.

The Minister directed Deputy Commissioner Abhiram G. Sankar and MUDA Commissioner P.S. Kantharaju to see that if there has been any encroachment and construction taken place then it has to be demolished and Government land recovered.

The next stop was at Vidyaranypuram Sewage farm where there is seven lakh tons of garbage collected. The whole place stinks because of this mound of garbage.

The team had to cover their mouth with cloth and enter the Sewage Farm. Devegowda directed the Corporation officials that included Superintending Engineer Mahesh and Health Officers Dr. Yeshwanth and Dr. Nagaraj to call for a tender and complete the process within a month to scientifically dispose of the garbage.

He also asked them to check on whoever bags the contract before finalising the  tender so that the people handling the waste disposal know about how plastic should be segregated and used, the remaining waste used for producing manure and also used for landfill.

There should be at least 10 JCBs used to clear the garbage and this is the only way environment can be protected. However, once the Waste Management Plant at Rayanakere and Kesare come up then the pressure on the Sewage Farm will come down. Though this process takes time it should be a continuous process, he told the officials.

Meanwhile, Ramdas pointed out that there was illegal activity going on in the 450-acre Sewage Farm where 50 acres is earmarked for Excel Plant. He alleged that at night cattle was allowed inside the farm for grazing and those in charge of the farm were collecting Rs.100 regularly. He asked the Minister to take action against such people. GTD directed the officers to immediately take action and prevent cattle grazing.

When the team reached the Karanji Lake-Lokranjan Mahal Road-Rana Pratap Road junction, Ramdas said that there was enough space near the compound adjoining the KARP Mounted Police building where parking can be allowed.

Ramdas called for widening the Lokranjan Mahal Road (Karanji Kere Road) by removing the wire fencing and also ban the entry of heavy vehicles on this stretch which is a Heritage Road.

Devegowda directed the Siddarthanagar Traffic Inspector Arunakumari to bring the issue to the notice of the Police Commissioner and implement the ban.

The team reached the Kurubarahalli Circle where the Minister performed guddali puja near Government First Grade College for road widening of the stretch from Kurubarahalli Circle up to Dairy Circle on Mysuru-Bannur Road at a cost of Rs. 3.99 crore. This road will be a four-lane stretch.

Then near Kurubarahalli Circle the team of officials, including three MLAs S.A. Ramdas, Tanveer Sait and L. Nagendra of K.R., N.R. and Chamaraja Constituencies together left to the Government Guest House in KSRTC Airavat buses for breakfast.

The Minister then went to N.R. Constituency where MLA Tanveer Sait apprised him of the problems. However, GTD’s visit to Chamaraja Constituency has been postponed to tomorrow (July 3).