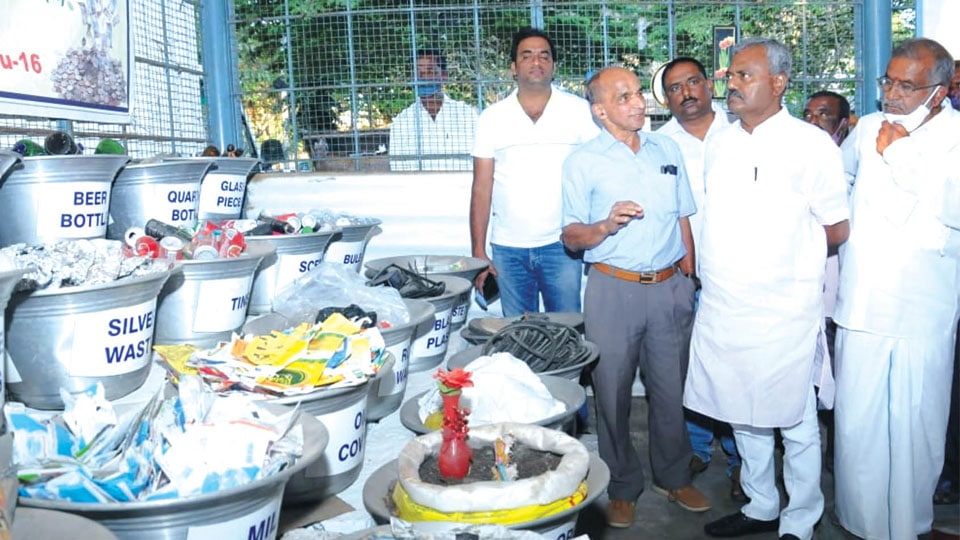 Madegowda was speaking at the stage programme that was held after Somashekar’s visit to the plant on Sunday.

Opining that Mysuru is fortunate to have an active Minster like S.T. Somashekar, Madegowda said that Mysuru had earlier bagged the cleanest city tag for two consecutive years. But in recent years, Mysuru has slipped in rankings. However, with an active District In-charge Minister, Mysuru has a better chances of regaining the cleanest city tag, he said an called for a Swacch Sarvekshan of the city involving people’s representatives, officials, teachers and Policemen, as such a move will help create a better civic sense among the population.

Regretting that the residents are indifferent towards following proper measures for waste segregation at source, Madegowda said that there is a need for sensitising the public on the fact that a good revenue can be generated from wastes too by converting them into bio-fertilisers.

District Minister Somashekar in his address, complimented D. Madegowda for running the Zero Waste Management Plant in an efficient manner by taking into confidence all those involved.

Bemoaning that people continue to dump waste indiscriminately along roads and highways despite the conduct of awareness and sensitisation programmes, the Minister said that he has directed the Police Commissioner and the MCC Commissioner to heavily penalise those found dumping wastes, debris and garbage along with a jail term, as such harsh actions seems to be the only way to make the indifferent public understand the importance of hygiene and cleanliness.

He further said that such a Zero Waste Management Plant will be set up in Bengaluru too, for which suggestions of D. Madegowda will be sought.

Chamundeshwari MLA G.T. Devegowda in his address, said that there is no doubt that the untiring efforts of the District Minister for ensuring that the city regain the cleanest city tag, will bear fruit.

He further said that  Co-operation Minister S.T. Somashekar is  perhaps the only Minister in the Cabinet to have toured the entire state twice for hearing the grievances of the people. As the District Minister, Somashekar is periodically touring the district to ensure that the district records a rapid industrial and overall growth.

Prof. K.S. Nagapathi of Federation of MCC Ward Parliament said that the Federation, with a workforce of 60 civic workers, is engaged in collecting wastes daily from 1,200 homes of the city. Pointing out that the Kumbarakoppal Zero Waste Management Plant  has taken up the responsibility of maintaining waste collection vehicles, he maintained that the Federation is striving hard for keeping the city clean.