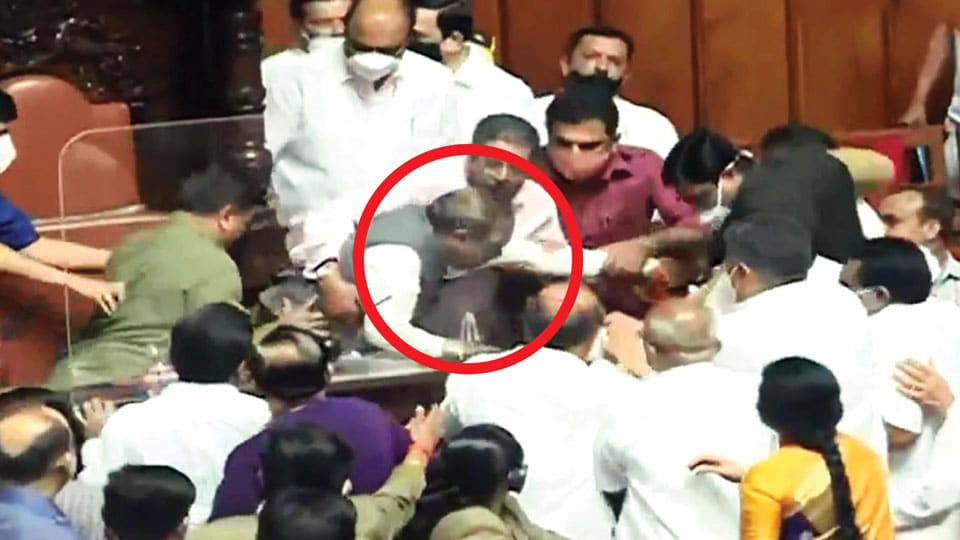 Do we need MLCs?

Election for Membership to the Karnataka Legislative Council (MLC) from Local Authorities’ Constituency concluded recently. Unfortunately, there was more talk of how much money candidates paid to get tickets and how much money they distributed to voters than talk of what each candidate would do if elected.

This bicameral system where the State’s Legislature has two houses — Legislative Assembly and Legislative Council — exists only in 6 States and Karnataka is one of them. When most States can function without a Council, why not Karnataka?

The Legislative Council also called ‘The House of Elders’ seems apt as it has no teeth; it simply has to swallow what it is fed with. When a Bill is put forth, the Council can only delay it for four months. After that, it will pass anyway. Similarly, when it comes to a Money Bill, the Council must return the Bill with a ‘pass’ within 14 days whether it likes it or not. Why then do we need this Council?

When describing the relevance of the Legislative Council in the State Legislature, many use the popular Kannada phrase, ‘Aatakkuntu Lekkakkilla,’ which translates to, ‘One may be in the game, but his presence does not count’.

The Legislative Council may be insignificant in the State Legislature, but its presence costs taxpayers’ money. And its members’ presence in urban bodies is negatively affecting everything, from urban planning to recruitment of teachers.

It is also an opportunity to raise funds for the party as rich people pay to get an MLC ticket. And they pay because it is an investment — once an MLC, they get direct access to bureaucrats and Ministers through whom they can get their work done.

READ ALSO  Ladies, you got played... Mysuru in Trouble

Also, it is easier to win an MLC election than an MLA election as the voters for MLCs are very few, which makes it logistically manageable and financially viable. If you are willing to spend and of the right caste, it means your chances of winning are almost guaranteed.

The Election Commission does not have a cap on election expenditure for MLC elections like MLA, making it easy to bribe voters. According to reports in National dailies, most MLC voters were taking anywhere between Rs. 10,000 to Rs. 30,000 per vote! What has added to this high bribe amount is the preferential vote system. It drives up the prices as candidates want to get the first preferential vote to guarantee their win and do not want to risk being the second preference.

While political parties and a select few voters fill their treasuries, why are we taxpayers paying to maintain this Council?

The Legislative Council costs the taxpayer over Rs. 51 crore annually! Each MLC is given a car, phone allowance, health insurance, accommodation, and even Rs. 15 lakh for computers every year. The travel budget for Council members is Rs. 11 crore a year, that’s Rs. 14.6 lakh every year per MLC !

MLCs get Rs. 6 crore per year as Local Area Develop Fund which adds up to Rs. 36 crore for their six-year tenure! Interestingly there is no website where the public can see where and how this money is used.

Once an MLC’s term is over, he and his family is eligible for a lifelong pension and health coverage. For all these benefits, what is their contribution to governance? Nothing.

Some say there is benefit to having a Legislative Council, citing that it is because of Rajya Sabha that we got people like Dr. Manmohan Singh and Arun Jaitley. But that may be so at the Centre. It is not the case in the State Upper House today.

Indeed there was a time when we had leaders like S. Nijalingappa, Kadidal Manjappa and Khadri Shamanna in the Council. But today what do we have? We have tickets given to scrap dealers and real estate barons, most of whom made their money by being layout developers and builders. It’s no more the House of Elders. It is the house of builders.

But they are in all the committees from MUDA to University recruitment. Is that why they become MLCs, to get first preference in allotments of corner sites, CA sites, stray sites, and vote on land approvals?

Undoubtedly the Legislative Council serves no significant purpose. It has become like the appendix in our abdomen. It serves no purpose to the body’s wellbeing but will cause harm when it ruptures. Similarly, the insignificance of the Council and the corruption of MLC elections prove that this appendix needs to be removed. But of course, why would any Government shut down its “accommodation centre.” Let’s hope some NGO takes up the cause.