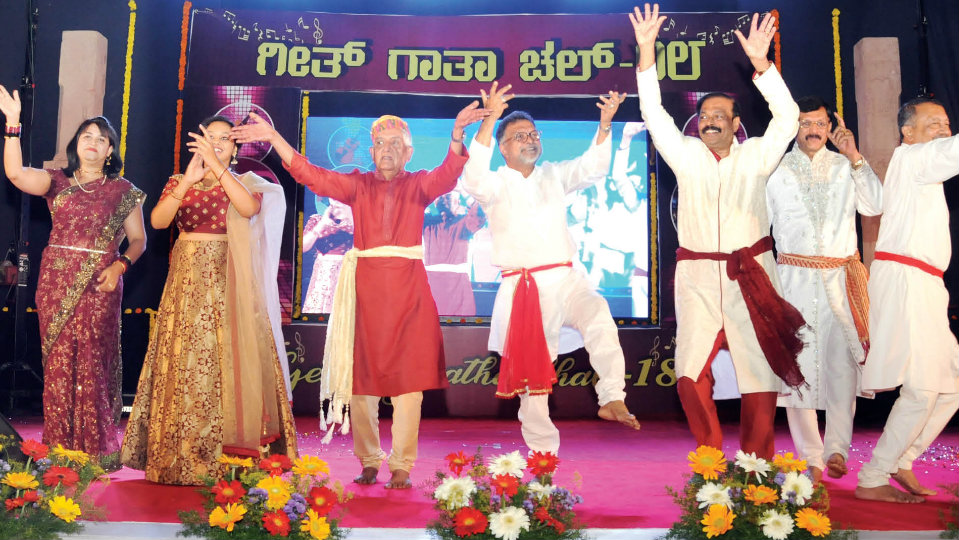 Mysuru: It was ‘Doctors Day’ alright as the medicine they dispensed was full of love, laughter, joy and above all, melody. There was never a dull moment as the songs kept oozing out of the mouth of the old and young doctors that the audience seemed to just lap up, at Kalamandira last evening.

The occasion was the 18th Edition of Doctors’ Musical Nite Geeth Gaatha Chal, an annual event sponsored by Dr. Jagannath Shenoy, noted industrialist and philanthropist and his wife Kusuma Shenoy. In all, there were 30 popular songs in both Hindi and Kannada including group dance and it was doctors all the way singing their hearts out to the delight of the listeners.

Noted singer Dr. M.S. Natashekhar, before beginning the programme with the song ‘Ee Desha Chanda’ from the Kannada movie Kaveri (1975) paid homage to Siddaganga Seer Dr. Sri Shivakumara Swamiji. The next song was a Hindi number ‘Thora mann Darpan Kehalai’ by veteran singer Dr. A.L. Hemalatha, followed by another ever-smiling veteran singer Dr. P.A. Kushalappa with the song ‘Mujhe Thumse Mohabbat hai’ and even as he began, the audience encouraged him with claps.

Then was the turn of singer Sparsha Shenoy, who sang ‘Surmain Akhiyomein’ and then the Kannada number ‘Ninnindale ninnidale’ from the movie Milana by Dr. G.D. Ravikumar.

Dr. Ganesh with a peta and a panche sang the Kannada number ‘Naaniruvude Nimagaagi’ from the film Mayura thus touching the hearts of Kannadigas.

Kavitha singing ‘Sevanthige Chendinantha Muddukoli’ which never fails to tug at the hearts of the listeners was no different this time and the two Hindi numbers, one a duet ‘Is Mod Pe’ by Dr. Somnath Vasudev – Dr. Seethalaxmi Somnath  and the solo number ‘Jaane Kaha Gaye Woh Din’ from Mera Naam Joker by Dr. U.G. Shenoy took one back to 1970s. The other numbers ‘Bhaya na Dharo’ by Dr. R.L. Varsha, ‘Kora Kagaz tha ye man mera’ by Pruthvi Shankar and Ranjitha, ‘Tuhi Meri Mandir’ by Apoorva, ‘Kabhi Kabhi Mere Dil Mein’ by Dr. Natashekhar, ‘Rahe Na Rahe Hum’ by Dr. Amrutha Upadhya were all a delight to the listeners’ ears.

Dr. S.K. Ghori, himself a popular singer, Ganabharathi President Dr. C.G. Narasimhan and a few other doctors were also seen tapping their feet to a popular number in  colourful costumes.

Dr. Jagannath Shenoy and Kusuma Shenoy, who have been sponsoring this annual event since 18 years, were felicitated along with Dr. Upendra Shenoy couple on the occasion.