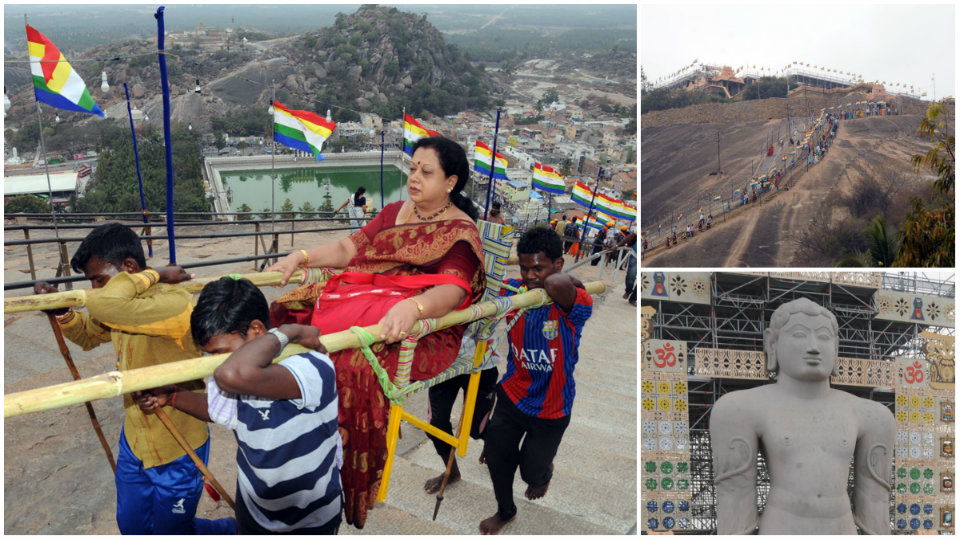 Over 300 Doliwallas are coming to Shravanabelagola from Shikharji to carry the devotees up the Vindhyagiri for them to have darshan of Lord Bahubali and witness the ongoing 88th Mahamastakabhisheka.

As of now, there are 20 designated local Doliwallas employed by the Shravanabelagola Jain Mutt who have been doing this business of carrying devotees since the past 15 or 20 years. 80 more Doliwallas have joined them from Shikharji in Jharkhand.

Following demand, 300 more Doliwallas are coming to carry the devotees. Dolis are chair-like structures, in which the infirm and elderly devotees are ferried. Each Doli is carried by four people. Vindhyagiri is at a height of 470 feet from the ground level. To have darshan of Bahubali statue, one should climb 630 steps. The Archaeology department has constructed special steps for the Doli carriers. 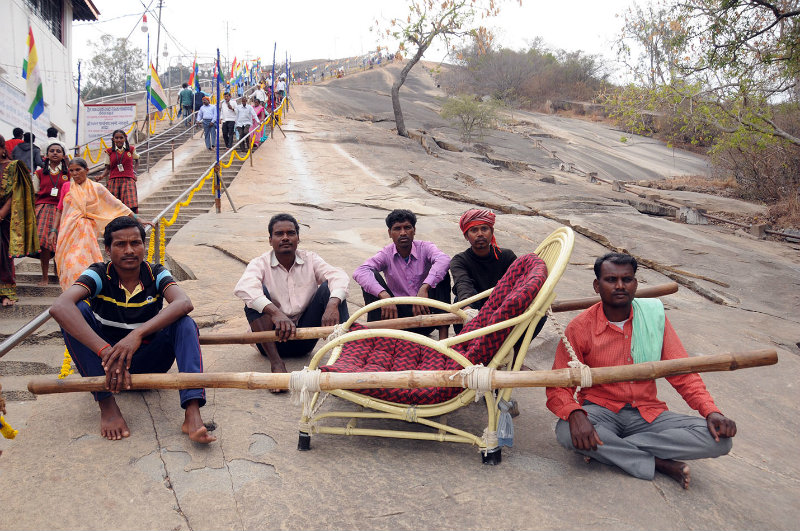 A batch of Doliwallas wait at the foot of Vindhyagiri to offer their services for the devotees.

“While we are permanently here, these Doliwallas from Jharkhand assist us. Lakhs of devotees are arriving to witness the Mahamastakabhisheka and the festivities will go on till the end of March. We hope to do good business as there will be many people including physically challenged and the elderly to be carried up the hill,” said Ashok Kumar, a resident of Shravanabelagola. He is one of the designated Doliwallas by the Jain Mutt.

“Carrying devotees in a Doli to the top of the hill requires special skills and all the carriers must be perfectly synchronized. We take work very seriously, including maintaining a special diet. It is not an easy task. Most devotees who seek our services are senior citizens. So we must carry them carefully without shaking the Doli,” Ashok Kumar says.

“Shikharji means venerable peak. The site is also called Sammed Śhikhar or Sammet Shikhar, meaning the peak of concentration, because it is a place where 20 of 24 Thirthankaras attained a state of moksha through meditative concentration,” said Desraj, who has been carrying the Dolis since decades. The fee charged by Doliwallas per trip at Shikharji is Rs. 4,000 as it is a cumbersome journey. Devotees climb the steps of Vindhyagiri to have darshan of the monolithic 58.8-feet statue of Bahubali.

Ravidas from Giridih district said that they have come with their families and accommodation has been provided by the Mutt.

“It is a long train journey from Shikharji to Shravanabelagola and we have come here to earn a living out of Mahamastakabhisheka that happens once in 12 years. We understand the sentiments of Jain pilgrims as we meet many of them at Shikharji,” he says.

These men from Jharkhand, along with their counterparts, charge Rs. 110 per trip. “We climb the hill with the support of a five-foot-long stick and take care to ensure that those sitting in the Doli are not inconvenienced. While the basic charge is Rs. 110, it also depends on the weight of the devotees,” he says.

When asked about their routine, Prathibhal Baske said, “We cannot understand Kannada and don’t know English. It is very tough to manage as we have to buy groceries and the shopkeepers don’t speak Hindi. Somehow we manage by showing the items we need in the shop. Whenever a customer comes to us we quote the price and they happily oblige.”

Hundreds of Scouts and Guides are ensuring that the devotees are not inconvenienced in any way. Apart from directing the devotees and Jain Munis to their respective townships, these volunteers stand at vantage points guiding the general public to food counters and shelter homes.

READ ALSO  Prez to stay overnight in Mysuru on Feb. 6 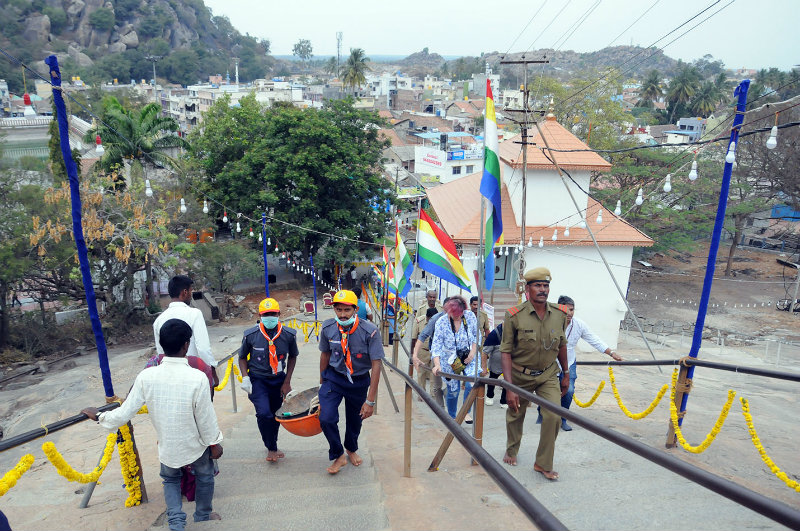 Over one lakh devotees are fed every day and these Scouts and Guides play an important role here. They also stand at regular intervals from the base to the top of Vindhyagiri providing water to the thirsty devotees. 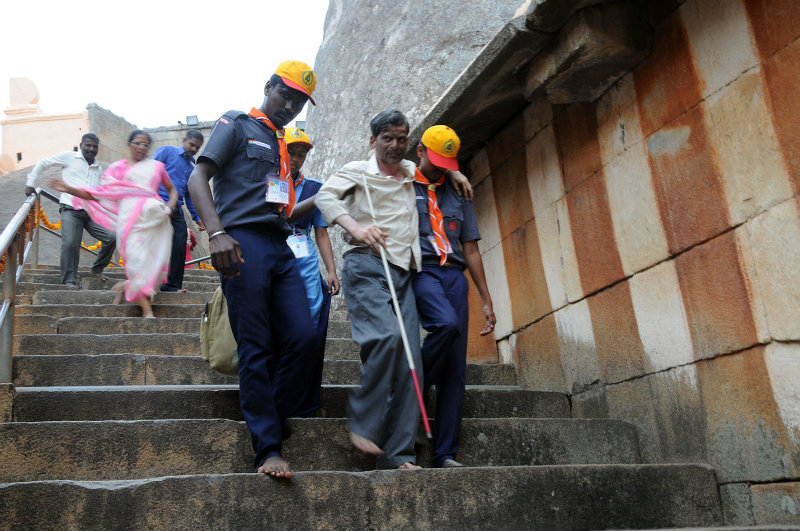 Over 15 Tongas from Mysuru have been taken to Shravanabelagola to ferry the devotees around the town. Apart from Tongas, battery-powered buggies have been arranged for the devotees and visitors. 700 tonnes of food grains pour in  for 88th Mahamastakabhisheka

Hassan, Feb. 9- Over 40 lakh visitors who are arriving at Shravanabelagola for the Mahamastakabhisheka are given free food. And to make this a success, thousands of Jain families have been donating generously.

Massive quantities of groceries — from wheat and jaggery to oil, rice and coconuts — have been pouring in from visitors and the faithful. So far, organizers say they have received about 700 tonnes of food grain from donors across the country. According to organisers, of the total requirement of groceries, they have received half the quantity in the form of donations. Six kitchens with 120 cooks per kitchen have been set up. Besides this, 17 dining halls have been set up. Each hall can seat 10,000 people at a time. Free breakfast, lunch and dinner would be provided to the public till Feb. 26. 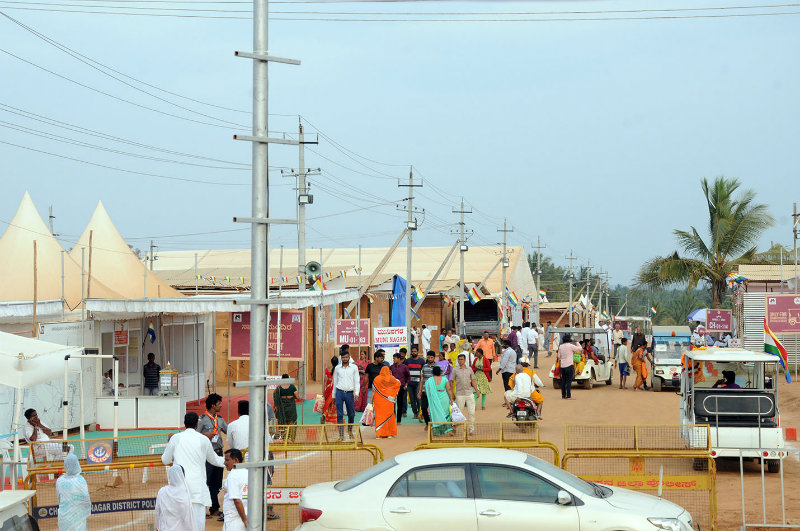 Many dedicated townships have been set up to accommodate lakhs of devotees and also Jain Munis who are arriving at Shravanabelagola.

Shravanabelagola Jain Mutt seer Charukeerthi Bhattaraka Swami yesterday (Feb.8) launched Pancha Kalyana rituals performed as part of the Mahamastakabhisheka. This will be held in five stages. It will showcase the five phases in the life of Bahubali, who renounced his kingdom and attained nirvana. The rituals will be conducted by hundreds of tyagis from different parts of the country. Devotees sprinkle rice grains on a stone carving that represents the feet of Lord Bahubali. 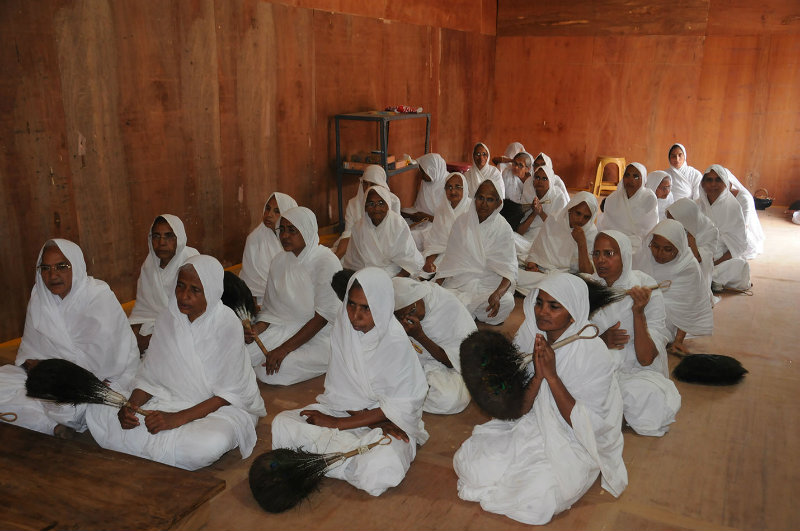 Shvetambara sect Jain women participate in Bhajans at one of the townships in the pilgrimage centre.

A grand procession was held as part of ‘Garbha Kalyana’ rituals. Vardhaman Sagar Maharaj, acharyas and others attended.