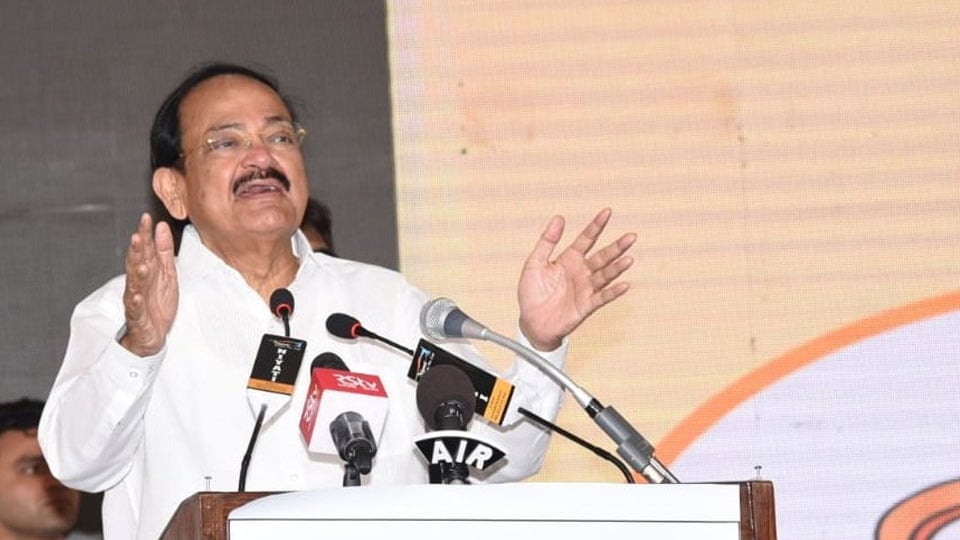 Mysuru:  ‘Amma’ or ‘Ammi’ comes from the heart while ‘Mommy’ comes from the lips, Vice-President M. Venkaiah Naidu said in city this morning as he urged people to speak in their mother-tongue. “Respect the language that has come from your mother’s womb,” he said.

Naidu was speaking after inaugurating the five-day Golden Jubilee celebrations of Central Institute of Indian Languages (CIIL) at its premises in Manasagangothri on Hunsur Road. He asked people not to forget their own language but said it was fine to talk in English when speaking to a foreigner.

“I always tell people that one should never forget his or her mother, motherland, native place and mother tongue. Those who forget cannot be called human beings, they are something else. So, always speak in your mother tongue. Respect the language that has come from your mother’s womb,” he said.

“Language is a tool for intellectual and emotional expression. We now use English language to address a mother — mommy or daddy… But, ‘Amma’, such a beautiful language, for a mother, comes from the heart or ‘Ammi’ in Urdu comes from the heart, while mommy comes from the lips. So, Hindi, Sanskrit or Urdu or Telugu, or Kannada we should always speak in our mother’s tongue,” Naidu said.

Naidu said students should imbibe the culture of respecting their motherland and mother tongue on a par with their own mother. “Whether it is me, Karnataka CM Kumaraswamy we all studied in government schools and I firmly believe in their ability to coach students on a par with private institutions,” he said, encouraging parents to consider sending their wards to government schools.

“There are 121 languages which are spoken by 10,000 or more people in India and it is our duty to protect all of them,” he opined.  He appreciated the CIIL for doing invaluable work on protecting Indian languages. “CIIL is doing meaningful research on communication and languages and the research will go a long way in protecting all the 22 scheduled languages,” he said.

The Parliament now allows its members to express themselves in any of the 22 scheduled languages. “We must explore the possibility of permitting our Parliamentarians to speak in their mother tongues in the House. We must leverage all possible avenues of technology to make this possible,” he said.

The Supreme Court of India has decided to make available its judgements in six vernacular languages, to start with. This is a positive step in the direction of removing language barriers and ensuring equal access to justice. Also, the Finance Ministry will conduct examinations for employment in Regional Rural Banks in 13 regional languages in addition to English and Hindi. All these initiatives will help in creating a level playing field, the Vice-President said.