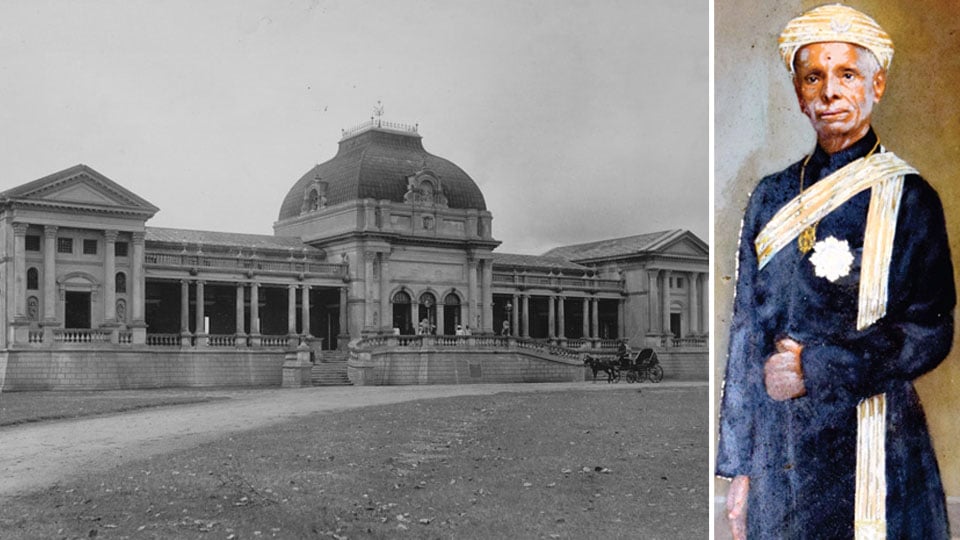 Mahamahopadyaya Rudrapatna Shamasastry was an extraordinary scholar who brought international fame to the city of Mysuru. He was born on 12th January 1868 at Basavapatna, to parents Venkataramaiah and Puttamma. At the age of 13, he came to Mysuru to study under Pt. Kallikote Sastry. He later joined Maharaja Sanskrit Patashala to pursue vidwat course and graduated in 1891.

The then Dewan K. Seshadri Iyer became a patron to R. Shamasastry and provided accommodation and food to the budding scholar. His only duty was to read scriptures to the Dewan’s mother. He was sent to Central College, Bengaluru, to study English, Sanskrit and Physics at the undergraduate level. He obtained a B. A. degree with distinction from Madras University in 1899. On recommendation of the Dewan, he was appointed as a Librarian at the Oriental Library (Oriental Research Institute), Mysuru, in charge of editing their publications. While here, he wrote such scholarly articles as “Devanagari Alphabet” (1905) and “Gavam Ayama” (1908).

During this period, Shamasastry was requested to catalogue the rare manuscripts and palm leaf texts of the Library. Many years ago, a Tanjore Pandit had gifted a rare palm leaf text to the Library. Till then, scholars had assumed that the great treatise on economics and politics “Arthashastra” written by Kautilya as being lost. Shamasastry discovered this rare text in a nook of the Library with commentary by Bhatta Swamy. It electrified the world of scholars and “Shamasastry & Mysuru” became famous overnight. So much so, that Nalwadi Krishna Raja Wadiyar, during his trip to Germany, was introduced as the Maharaja hailing from Shamasastry’s hometown of Mysuru, where Arthashastra was discovered!

Shamasastry was unable to decipher the script even after three months of its discovery. One night, in his dream, the key to the text was revealed. He could later read the Granthi Script and translate it. The full text was published in 1915 with an introduction by Dr. Fleet, the renowned Indologist. His introduction heralded to the world the discovery and translation of such a magnificent piece of work (presumed lost hitherto) and credited Shamasastry for having accomplished such a grand endeavour. Though there are numerous translations of the Arthashastra since then, it is Shamasastry who deserves laurels for bringing it to the public notice to begin with.

Shamasastry gifted Gandhiji a copy of “Arthashastra” during their meeting at Nandi Hills. He told the Mahatma, “Self-sacrifice was a dictum for ancient Hindus. Now also if cultured centres like ancient viharas come up, everything will be alright. Ashoka had Upagupta, Pushyamitra had Patanjali, Kumarapala had Hemachandra and Kings of Vijayanagar had Vidyaranya. Now, we too want an army of highly cultured, selfless, educated men to proclaim the ideal of self-sacrifice wherever we go. We too will then acquire lasting peace and happiness through it” to which Gandhiji quipped: “But, who is to bell the cat, Mr. Sastry?”

In 1906, he co-edited “Taittariya Pratisakhya” along with Sri Kasturi Rangacharya. In 1909, he published translations of nineteen other Sanskrit works and nine ancient Kannada works. These endeavours were greatly aided by contemporary scholars like A. R. Krishnasastri, T. N. Subbarayasastry and V. Shyamacharya. Shamasastry held the post of Principal of Chamaraja Sanskrit College at Bengaluru from 1912 to 1918. He served as the curator of Oriental Library, Mysuru, in 1918. From 1922,  Shamasastry was Director of Archaeology Department in Mysuru for seven years. He oversaw restoration of temples at Halebeedu and Belur. He made important contributions in the field of Epigraphy and Numismatics. From 1925 onwards, the annual reports of the Archaeology Department also carried the Kannada version of the Inscription. He established an Archaeology Museum in the Princely State of Mysuru.

Shamasastry received a Ph.D Citation from Oriental University of Washington in 1919 and the Campbell Memorial Gold Medal from the Royal Asiatic Society, Mumbai Chapter, in 1921. Krishna Raja Wadiyar IV conferred on him the title “Arthashastra Visharada” in 1926 while the Viceroy and the Governor General of India conferred the title “Mahamahopadyaya” in 1930. Bharatha Dharma Mahamandali (Varanasi) conferred the titles “Vidyalankara” in 1924 and “Panditaraja” in 1935.

Sastry authored seven books and contributed 100 articles in various journals. Some of his popular books include “Vedangajyotisya” (1936), “Drapsa: Vedic Cycle of Eclipses” (1938) and “Evolution of Indian Polity” (1919) among many others. His felicitation volume had contributions from eminent persons like  R. K. Mookerjee, Kuppuswamy Sastry, M. Winternitz, P. V. Kane, Jha, Ashutosh Mukherjee, D. R. Bhandarkar and C. R. Reddy. His correspondences with his network of contacts included the likes of Rabindranath Tagore, B. N. Seal, A. Venkatasubbiah, B. A. Saletore, S. M. Godrej, L. D. Barnett, Stein Konow, A. B. Keith and Sir Richard Temple.

Upon invitation from the then VC of Calcutta University Sir Asutosh Mookerjee, Sastry delivered 10 lectures on “Evolution of the Indian Polity.” These were later brought forth as a book in 1920. Calcutta University honoured Shamasastry with an honorary doctorate in the same year. The modern translation of Arthashastra is a prescribed text at Harvard, Yale and Oxford for students of Political Science, International Relations and Economics today.

Sastry named his house in Mysuru as “Asutosh” (abode of contentment) and spent his last years here. He lived till the age of 77 years and breathed his last on 23rd January 1944. With his passing away, a glorious and remarkable chapter in the history of traditional scholars of Mysuru came to an end. A flood of condolence letters made their way to “Asutosh” from across the world.

It is sincerely hoped that Rudrapatna Mahamahopadyaya Arthashastra-Visharada Vidyalankara Panditaraja Shamasastry’s erudition, scholarship and command over languages will be emulated by present day scholars and students.

2 COMMENTS ON THIS POST To “Dr. R. Shamasastry Mahamahopadyaya of Mysuru who discovered the lost treatise Arthashastra!”