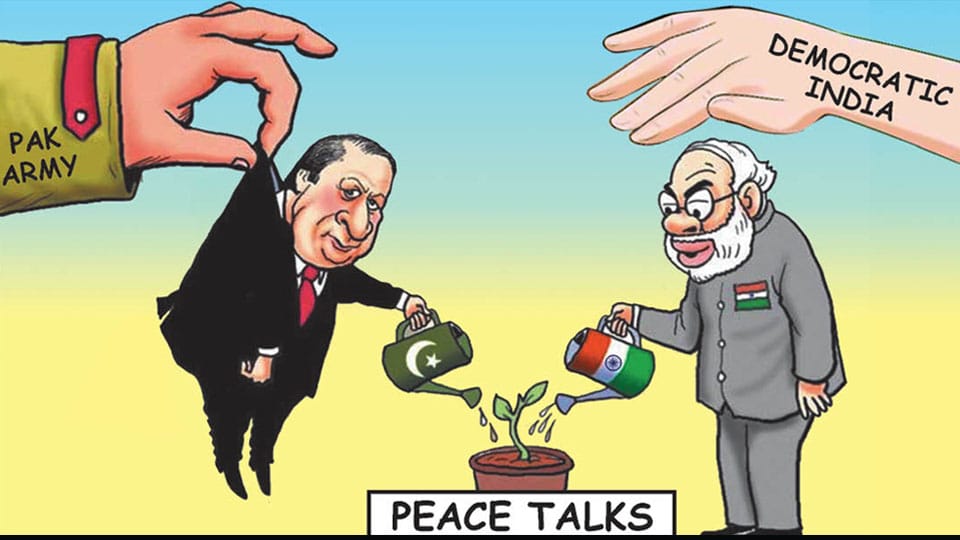 In the wake of Pulwama terrorist attack, here we reproduce the Abracadabra published on Aug. 25, 2015:

It started at Ufa, Russia, where Narendra Modi and Nawaz Sharif met on the sidelines of Shanghai Cooperation Organisation (SCO) Summit they were attending on July 10, 2015. Prime Minister of India Modi and the Prime Minister of Pakistan Sharif agreed for talks between the National Security Advisors (NSA) of India and Pakistan at Delhi primarily to discuss Cross-border firing across Line of Control (LoC) and International Border (IB) between the two countries. Talks are cancelled primarily for two reasons:

1. Pakistan wanted Kashmir issues to be included which was not there, according to our Home Minister Rajnath Singh, when Prime Minister Modi had a meeting with Nawaz Sharif. 2. India wanted incidents of terrorism in J&K and other parts of the country to be included in the talks.

Rightly, the Chief Minister of J&K Mufti Mohammad Sayeed has endorsed India’s view saying, “Escalation of firing along the LoC, coupled with incidents of terrorism, are matter of serious concern to us here (J&K) as much as they are in the rest of the country.”

According to social, print and electronic media, since Modi took over office the LoC and IB firing is challenged effectively on the principle of ‘an eye for an eye and tooth for a tooth’ and also two heads for one. In countering terror, it has been not as much a chess-board challenge as it is a Snake and Ladder game.

As for talks that have been cancelled with egg on the faces of both Sharif and Modi, people in both countries are left wondering whether there was agreement on only one agenda about the issue of cross-border firing along LoC and the IB without any condition or whether these new conditions were brought in with the sole objective of “sabotaging” the NSA talks as Pakistan is accusing India. Similarly, India is blaming Pakistan of sabotaging the talks by bringing in the “Kashmir issue” to be included in the talks.

According to India, this NSA level talk with only LoC and IB cross-firing and terrorism on the agenda was the “Red-Line” drawn by Pakistan.

Once these talks get over, this was to be followed by two other meetings — one between DGMOs and another between Chiefs of India’s BSF and Pakistan’s Rangers.

The third and final meeting in this initiative would be at the land of the world’s Super Policeman, US, when these two leaders meet on the sidelines of UN Meet in New York next month.

I have a gut feeling that US is an unlucky land for both Pakistan and India or even UN (which is located on American soil) for holding Peace-talks or talks on settlement of India’s complaint against Pakistan. UN, however, cleverly converted our complaint to a dispute with the support of partisan UK and USA when our then Prime Minister Nehru unwittingly and unwisely took the internal war of newly divided country to UN.

To recap India’s poor leadership quality in the matter of settling internal war declared against it by its newly-born neighbour, Muslim Pakistan, one must read the book “Tower of Babble” by Dore Gold, the former Ambassador to the United Nations, then a puppet of Allied Power of World War II with Veto Powers resting with US and Russia. Indeed some similarities are there in the division of India and Palestine that happened immediately after World War II ended in 1945. India was divided between Muslims and the rest with Hindu majority while Palestine was divided in 1948 between Jews and Arabs.

It is significant to note here that UN did not have any role in dividing India. It was the British who divided India.

But as for Palestine, it was UN which had a role in the partition of British Mandatory Palestine.

Why then did Nehru go to UN with a complaint, instead of going to England, to the Privy Council or British Parliament? This is my question. If any of my readers has an answer to this, I shall be happy. Was it because Lord Mountbatten was wiser than Nehru? Indeed, Lord Mountbatten was clever by half. The book mentions, “The Foreign Secretary Ernest Bevin wrote to Prime Minister Attlee that London had to be very careful about siding with India at the UN, given the tension that had arisen in Islamic world over Palestine.”

Most ungrateful colonial ruler who, to use Shashi Tharoor’s words, exploited India in many ways making Indian people “Pay to England for their own oppression.” Appeasing Muslims all over the world, including India, at the cost of a truncated Hindu majority Secular India without any moral compunction was the idea of a fair and just rule for the British. No wonder, the clarion call of a British patriot is ‘Right or wrong, my country’; damn India.

If Nehru committed the first blunder with regard to J&K policy, his daughter Indira Gandhi, who went with the sobriquet “Empress of India,” thanks to cartoonist R.K. Laxman, committed the second blunder on July 2, 1972 when Simla Agreement was signed by victorious India after the Bangladesh war that severed Pakistan like its soldiers severing the heads of our Jawans on the border. Dom Moraes, the well-known columnist wrote, “Indira Gandhi created not only history but also geography.” A beautiful phrase with all its rhetorics. Let it be.

India could have settled the J&K problem under Simla Agreement, but it again succumbed to a crafty Prime  Minister of Pakistan Zulfiqar Ali Bhutto and merely got a leash in hand to keep Pakistan out of UN and the UN out of any post-war diplomacy with regard to Kashmir issue. If anything, these two countries are to settle their own differences by peaceful means “through bilateral negotiations or by any other peaceful means MUTUALLY agreed upon between them.”

Despite suffering bitter wars declared against India from the days of Dictator Field Marshal Ayub Khan to the days of another Dictator Yahya Khan with his belligerent, haughty, Prime Minister Zulfiqar Ali Bhutto, who called us “Indian dogs in Kashmir” and Yahya Khan who humiliated our “Empress of India” by calling her “that woman,” India signed that Simla Agreement, which Pakistan had treated as a dead-letter even before the ink on the paper had dried.

I think, as long as US and China are supportive of Pakistan, no purpose will be served in hoping to talk with this Rogue State at all. If we cannot change our neighbour, then we will have to resign ourselves to our fate and learn to manage the demon.

I may only suggest to the rulers, BJP or Congress or any Kichadi Party that may rule India, to use our western border with Pakistan as a Godsend ground for simulated military exercises permanently. I know Pakistan may do the same, but so be it. We can’t build a ‘Berlin Wall’ like someone suggested on NDTV 24×7 last evening. We may also grow roses along the border or LoC so that the symbol of love and affection that Nehru wore on his jacket may also be seen on the berets of both Indian and Pakistan soldiers. After all, love has no boundaries, except for nations built purely on religion. Should I explain?

And finally, Pakistan, like many Muslim countries, can survive as a stable nation only under dictatorship or Sheikhdom. Hence, Pak Military is the key to solve Kashmir problem. Even now it is on the Army’s shoulder Pakistan’s sham democracy is resting with its namkavasta Prime Minister Nawaz Sharif [now Imran Khan] sitting pretty like a Utsava Murthy!

India should have known this at Ufa, in Russia, and asked Nawaz Sharif if he has Army’s permission for the NSA talks and for its agenda. Apparently, he did not. As for India no problem. Our country is firmly rooted in Democracy, Secular Democracy for the security of our minority communities as well unlike in Islamic Pakistan where law of blasphemy is giving hell to minorities. Indian people are the masters of our Prime Minister, not the Army General. For this reason alone I feel, no matter when, it is the Pakistan Army that can talk to India and settle the Kashmir issue. For protocol purpose, let Army Generals of both the countries hold talks, like the aborted NSA talks. Then the Prime Ministers may talk. With this the cross-border firing and terrorism will naturally stop once and for all. I am sure, the educated new generation of Pakistanis will put behind the tragic history and move forward to peace and economic prosperity paving way for Hindu-Muslim brotherhood as good neighbours. It is possible. It is the rulers and the Army (in Pakistan) that have made the majority of wonderful, affectionate Pakistani Muslims IRRELEVANT.

While in US twice I was a recipient of Pakistan Muslim citizen’s hospitality in restaurants. Once a girl medical student recognised us as Indians from our looks and approached us at our table as a part-time waitress. Had a small talk with my sister-in-law who is a practising senior doctor. We had our dinner with beer. And when we asked for the bill, she smiled and said, “Bill is on me.” This was in New York.

I am sure, though talks may have failed for now, the hearts of Pakistan and India will not fail. No heart failure! It can’t be a case of ‘Pakistan is Pakistan and Hindustan is Hindustan. The twain shall never talk.’

3 COMMENTS ON THIS POST To “Dumb India, Deaf Pak: Twain shall never talk?”