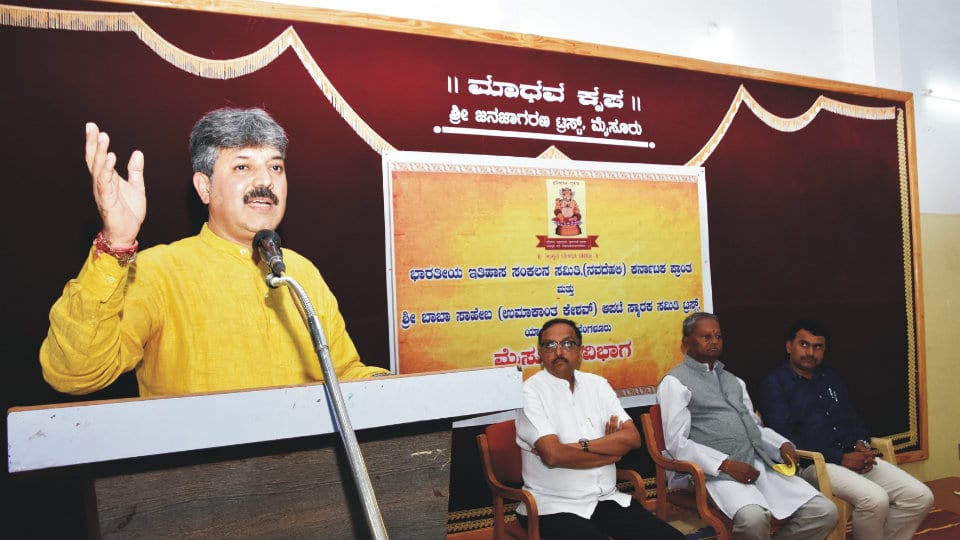 Mysuru: With the Narendra Modi Government abrogating the draconian Article 370 in Kashmir, the people of Jammu and Kashmir will attain the same privileges and rights that are granted by the Constitution to all Indians, said Jammu & Kashmir Studies Centre Member G. Dilip Kachroo.

He was delivering a talk on ‘Jammu & Kashmir – Before and After Article 370’ at Madhava Krupa on JLB Road on Oct.26. The talk was organised by Karnataka Chapter of Indian Historical Records Committee, in association with Bengaluru-based Sri Baba Saheb Amte Memorial                       Committee Trust.

India is one nation from Kashmir to Kanyakumari — Wagah Border to Dawki-Tamabil in Meghalaya to Rann of Kutch in Gujarat and from Pangong Lake in Ladakh to Dhanushkodi in Tamil Nadu. “Every citizen is granted equal rights here. But the rights and privileges of the people of Jammu and Kashmir were snatched away by Article 370 and Article 35 A and this historical blunder has been corrected now,” he said.

“The picture of Jammu and Kashmir will change in 15 years and the land will contribute to India’s economy. Development, political empowerment and dignity are basic needs of any State and the Government can now comfortably concentrate on them in Jammu and Kashmir,” he added.

Dwelling in detail about the abrogated Articles, Kachroo said, undoing of draconian Article 370 was Sardar Patel’s unfinished dream. He slammed those questioning how the abrogation happened without consultation of public.

He further said that the decision was made in consultation and also was tabled in the Parliament unlike how it was implemented by Jawaharlal Nehru at the first place. No Parliament approval was taken for 40 odd amendments in the past on Article 370 and Article 35A and why would it be needed for abrogation, he questioned.

There was no industrial development and job creation in the State and the last industry was set up decades ago he said. Fiefdom of families in Jammu and Kashmir would not allow Panchayats to have powers though the ritual called elections was conducted. “Dignity of people was at stake, as people are not considered as State subjects, over a lakh families do not have ration cards, lacking basic facilities with no powers to vote with no hospitals and education too. Such dilapidated condition was the result of the draconian law,” he revealed.

He said it was a great achievement for everyone specially the Kashmiri Pandits. He also said that a great long time had been given for terrorism and discrimination in the land of Kashmir and now it’s time for everyone to give time to PM Narendra Modi for development.

“Kashmiri Pandits who are the cultural ambassadors of the place were sadly thrown out of their land and it is now matter of pride for all of us that Pandits can return to their home land by abrogation of Article 370. Terrorism and insurgency resulted in a big way after the exodus and is time to erase it off,” he said.