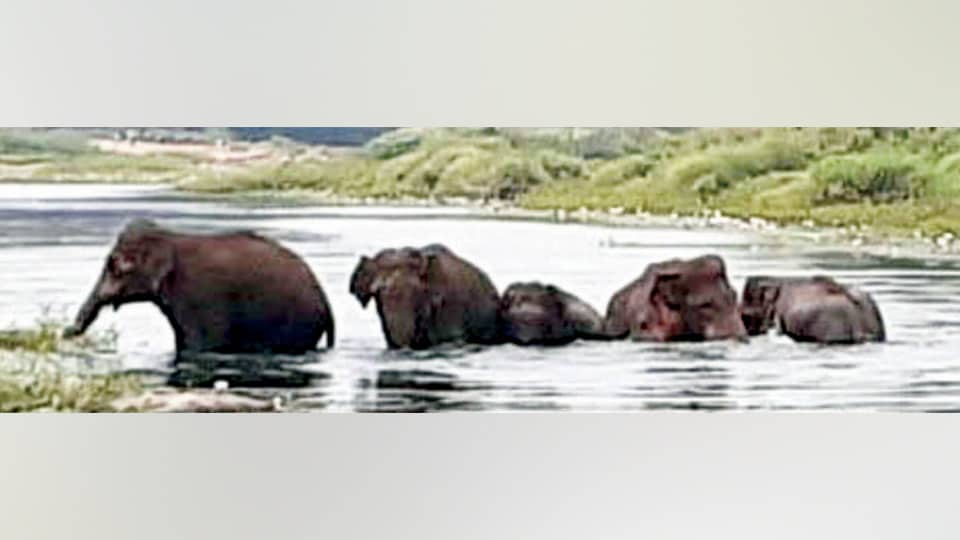 Maddur (Mandya): Even as the entire State is under COVID-19 lockdown, a herd of five elephants was found regaling at Shimsha river near the town on Friday morning, causing concern among the nearby villagers. The elephants, which are said to have come from the nearby forest, have reportedly destroyed Sugarcane, Paddy and Banana crops grown in fields along the river bed before entering the river.

Villagers of Shivapura and K. Kodihalli, who saw the herd of five elephants — Four male and one female — informed the matter to Maddur Police, who in turn alerted the Forest Department officials. The Forest officials, who rushed to the spot, took measures to ensure that the elephants stayed in the river till they were driven away.

Maddur Conservator of Forests Ratnakar said that the herd of pachyderms may have strayed from Kombinakallu Reserve Forest in Channapatna taluk of neighbouring Ramanagara district after passing through the ranges of Nidaghatta, Tailur and K. Kodihalli. The Department will take measures for driving the elephants back into their forest habitat by Friday night, he added.

Soon as the news of spotting of elephants at Shimsha river spread, residents of nearby villagers rushed to the spot to have a glimpse of the elephant herd regaling in the river. Maddur PSI Manjegowda, Forest officers  Shailesh, Shashidhar, Ravi and others were present.