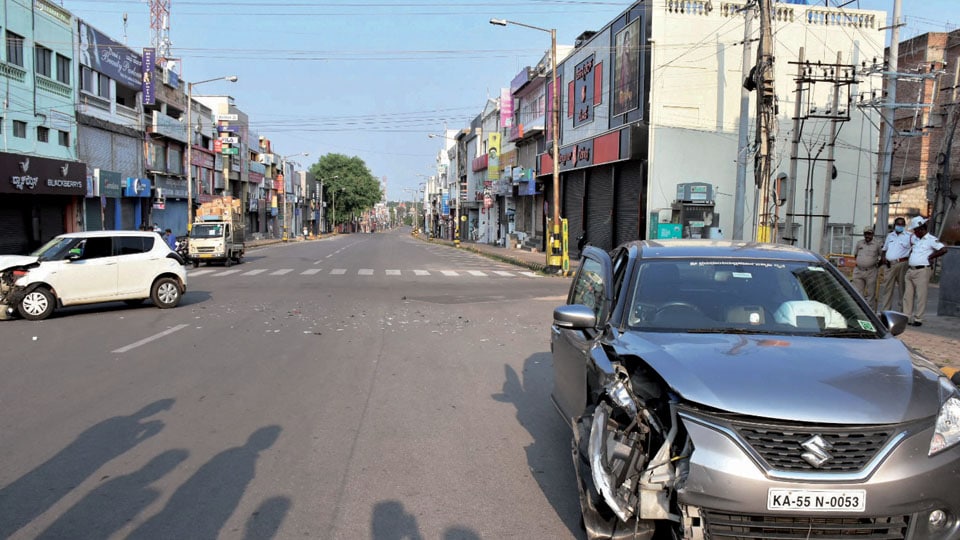 Mysore/Mysuru: Though almost all roads in the city wears a deserted look following lockdown, two cars collided on the deserted Devaraj Urs Road last evening resulting in both cars getting damaged. Luckily, two persons behind the wheels of the cars, have escaped miraculously without a scratch.

At about 4.14 pm yesterday, Gourav, a resident of Chamaraja Mohalla, who came from Dewan’s Road in his Maruti Swift car (KA-05-MR-345), was taking a right turn to enter Devaraj Urs Road, when a speeding Maruti Baleno car (KA-55-N-0053), driven by one Chethan from K.R. Circle side, rammed into the Maruti Swift car.

Due to the impact, the front portion of both the cars was damaged. Both the cars have been seized and a case has been registered at Devaraja Traffic Police Station.

A 72-year-old man was killed, when a speeding bike rammed into him on Vani Vilasa Road on Friday. The deceased has been identified as Lingashetty of Alanahalli. As the address of the deceased in the Ration Card was mentioned as Sunnadakeri, the deceased was on his way to Sunnadakeri to procure rations for April and May from the Fair Price Shop. As he was crossing the road to go to Sunnadakeri, a speeding Hero Honda bike, which came from Agrahara Circle side, rammed into Lingashetty, rendering him unconscious. K.R. Traffic Police, who rushed to the spot, was shifting Lingashetty to K.R. Hospital, but he breathed his last midway.  A case has been registered against bike rider N. Sanjay at K.R. Traffic Police Station.