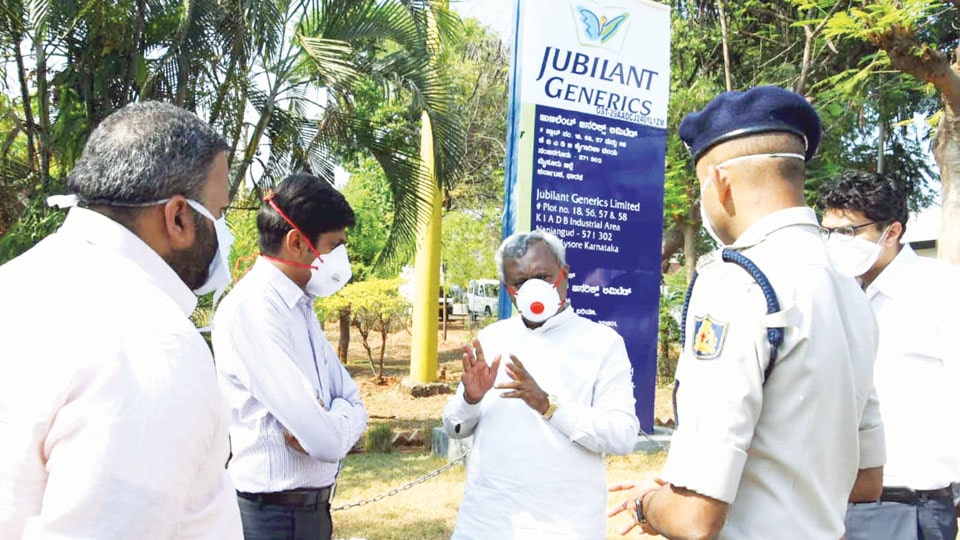 Mysore/Mysuru: With more employees of Nanjangud’s Jubilant Generics testing positive for novel Coronavirus, District Minister S.T. Somashekar said that a stricter lockdown is in place in areas around the Pharmaceutical Company, including Hebya and Someshwara villages.

Speaking to presspersons after holding a meeting with Legislators, ZP members and District-level Officers at the ZP Hall here yesterday, Somashekar said that with Hebya and Someshwara villages near Jubilant Generics  found vulnerable to the deadly virus, the lockdown regulations have been tightened around the entire area of the Company.

Replying to question on whether Nanjangud town will be sealed off, the Minister said that a decision will be taken after consultations with local MLA B. Harshavardhan, Deputy Commissioner  Abhiram G. Sankar, SP C.B. Ryshyanth and other officials concerned.

Earlier on Saturday, Minister Somashekar  visited Jubilant Generics Pharmaceutical Plant at Nanjangud, the epicentre of Coronavirus spread in the district and took stock of the situation. The DC apprised the Minister of the quarantine measures and told him that 20 Security Guards of the Factory, who are secondary contacts of the virus infected, were under quarantine in the factory premises itself.

Assuring the officials that he would get all the help needed by the State Government for stopping the spread of the virus in the district, which has been declared as Red Zone, Somashekar said that he would always be available in the battle against the pandemic.

Later the Minister visited Devirammanahalli  extension, which is under quarantine and enquired about the health of the people there. He directed the officials to take up fogging in all areas around the Factory, to paste Corona awareness stickers on all houses and to distribute hand sanitisers to the villagers.

Somashekar later visited Linganna Choultry in the town, where homeless and destitutes are sheltered. Enquiring about their health, the Minister asked the inmates to maintain social distancing.

He later visited Srikanteshwara temple in the town and offered prayers to the deity.