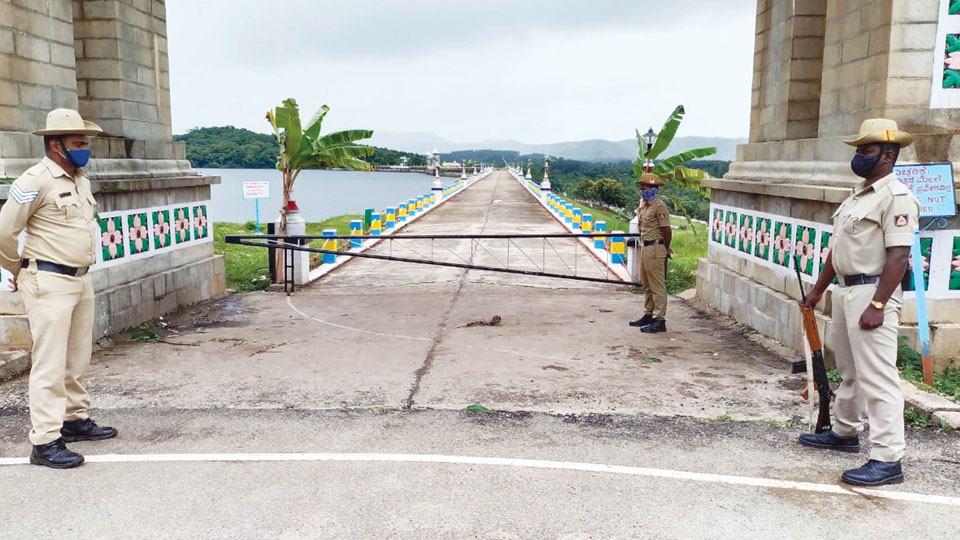 Mysore/Mysuru: Amidst thick of a controversy over the safety and security of the KRS Dam in Mandya in the wake of rampant illegal mining, the State Government has upgraded the security of Harangi Dam in Kodagu district that is the only upstream reservoir that supplies water to KRS.

Now the security apparatus has been handed over to gun-toting professionals from the elite Karnataka State Industrial Security Force (KSISF). Over 23 men are guarding the Dam 24×7 and unrestricted entry has been banned. All visitors will be frisked henceforth and only those who have valid permission from the KSISF will be allowed inside.

The KSISF also manages the security of the KRS Dam. The Harangi Dam is in the upper Cauvery sub-basin reservoir near Hudgur village in Somwarpet taluk. Water from the reservoir irrigates 1.65 lakh hectares of farmland in Kodagu, Hassan and Mysuru districts. The maximum height of the reservoir is 2,859 feet and it has the capacity to store 8.5 tmcft of water.

The KSISF personnel are guarding the Dam main gate, four sluice gates and power house. Vigil will be kept till the end of the right canal. As per the new security protocol, vehicle parking has been arranged at the entrance of the Dam and visitors have to obtain permission from the Irrigation Department to enter the reservoir premises. Also, permission from the KSISF is required for private vehicles.

Earlier, private vehicles could enter into the Dam premises easily and entry was unrestricted if the visitors had the backing of politicians and elected representatives. The place was also a haven for illegal activities where liquor parties were held at the Dam guest house and also at a few places in the vicinity and backwaters.

Now all those who enter inside the Dam are screened and the registration number of the vehicles and information of tourists are documented.

Speaking to Star of Mysore, Inspector K.S. Chandrashekar said that as Harangi is a sensitive zone, the KSISF has been entrusted with the security.

He said that the Dam security and the safety of visitors were paramount and security will also be provided to the sound-and-light show in the evenings.

The KSISF was set up in 2012 and it started its service by providing security cover to Vidhana Soudha, Vikasa Soudha and KRS Dam when Siddharamaiah was the CM. The KSISF personnel are trained in access control, gadgets management, communications, people management, fitness and have an eagle eye for disaster management.