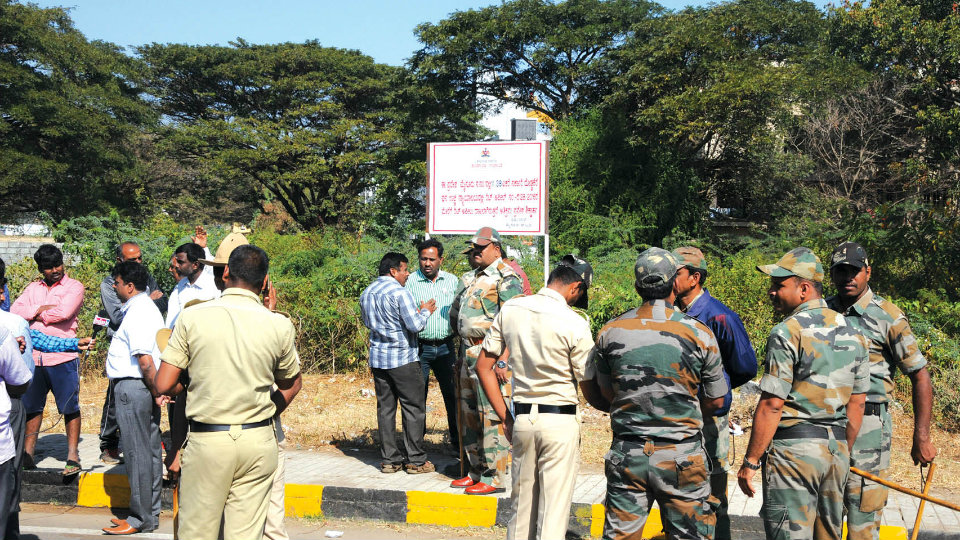 Mysuru: The Doddakere Tank Bund Site Owners Welfare and Development Association has flayed the Mysuru District Administration’s move of ‘trespassing’ the Association’s land despite Court orders that had favoured the Association.

On Jan.10, armed with earth movers, Mysuru Tahsildar had cleared the ‘encroached’ land at Survey Number 1 near Mall of Mysore, Kasaba hobli, Mysuru taluk. The 11-acre-38-guntas land is located between Mall of Mysore and the M.G. Road Vegetable Market.

According to Tahsildar T. Ramesh Babu, the Doddakere Tank Bund Site Owners Welfare and Development Association had allegedly encroached upon the Government land that is worth more than Rs.150 crore.

However, in a press release, the Association Secretary P.S. Mahesh has said that the Tahsildar had trespassed on the land owned by the members of the Association.

Further, Mahesh has stated that the Tahsildar has wrongly claimed that the land belonged to the Association and the land is ‘Kharab’ (Government land) and can only be used for public purposes and no private individual can claim ownership over it.

READ ALSO  We could not bring down infections despite efforts, says MP

“Both these claims have been dismissed by various Courts and the Government’s own records,” the Association Secretary said. Members of the Association purchased sites from Jayachamaraja Wadiyar in 1972-1973 and the individual sale deeds were registered, Khatas were issued to the members by Mysore Municipal Corporation and taxes are being paid since 45 years.

“Subsequently, following the directions from MUDA, individual site owners formed the Association to form a layout as per MUDA requirements. The district officers are fully aware of a large number of Government documents and letters which acknowledge that the legal title of ownership over the Doddakere Maidan (in which the land owned by the members of our Association is a part) rested with the erstwhile Maharaja and those who purchased sites from the Maharaja have derived the right, title and interests over the property,” he said.

“This was explicitly stated in the HC order dated 10-3-2016 in the Writ Petition W.P. 20243-20245/2009. The High Court held that the contention of the State Government that land is ‘Kharab’ is belied by the fact that the State Government has notified and acquired the land in several parcels to form a residential layout and have allotted to third parties.

Apart from this, a certain portion has been earmarked to a Five Star Hotel and therefore the contention that it is ‘Kharab’ land and belongs to the State is belied by the circumstances.”

HC rules in favour of Association

The HC allowed the Association’s Writ Petition, and upheld the original sanctioned layout plan by MUDA in favour of the Association. Thus, Mysuru Tahsildar cannot claim that the property belongs to the State when the Government’s Writ Appeal has not been admitted. Government records and the Mysuru DC’s reports show that 5.4 acres of Doddakere Maidan has been auctioned to a hotel and a residential layout is also formed in 11 acre portion of Doddakere Maidan where palatial houses have been built, he said.

“The DC’s report clearly states that by virtue of the agreement between Union of India, the Mysore State and Maharaja, the land in question belongs to the Royal family. The report admits that sites have been sold to members of our Association and that the Khatas have been issued in their favour by the Mysore Municipal Corporation,” the Association Secretary stated.

“The Mysuru Tahsildar and the Government are also fully aware that they cannot claim the title to our property since the Government itself sought Law Department’s opinion at least five times (From 1995 to 2011). These legal opinions categorically state that the Maharaja of Mysore had a valid title over Doddakere Maidan, and those who purchased sites from the Maharaja have derived right, title and interests over the property,” he stated.

“The coercive actions taken by the Tahsildar are illegal and unfair. His actions appear to have been taken with malafide intentions and intent of appeasing the vested interests and in the process needlessly harassing the ordinary law abiding citizens,” Mahesh said.