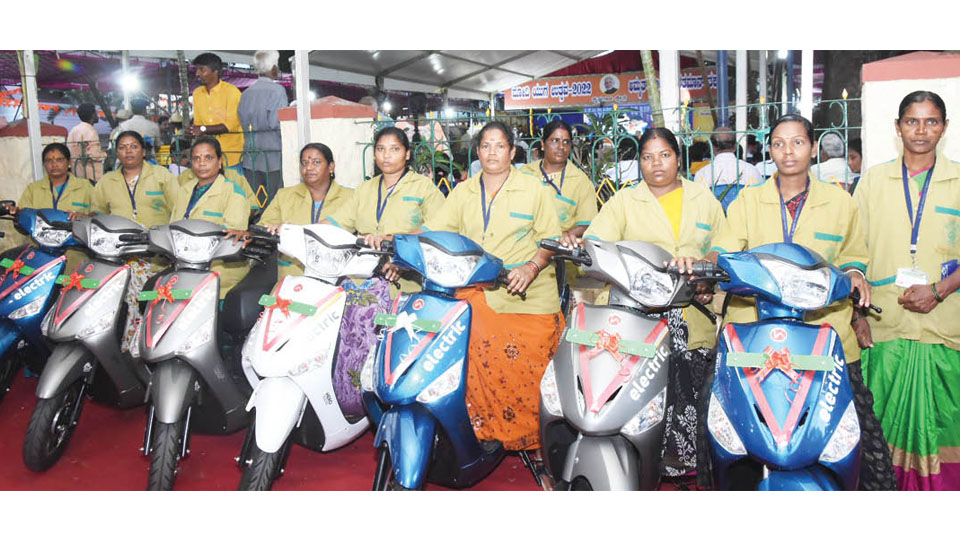 Era of development in KR Constituency has begun: CM

Mysore/Mysuru: Observing that Legislators taking Governmental benefits to the doorsteps of beneficiaries will lead to wonderful results, Chief Minister Basavaraj Bommai said that KR MLA S.A. Ramdas has effectively reached different benefits to over 70,000 beneficiaries of various schemes in his Constituency.

He was speaking after inaugurating the valedictory of the nine-day ‘Modi Yug Utsav-2022’ organised by KR MLA S.A. Ramdas marking Prime Minister Modi’s birthday at Ramalingeshwara Park in Vidyaranyapuram here on Sunday.

Pointing out that MLA Ramdas has reached the benefits to targeted beneficiaries directly without giving any scope for middlemen, Bommai said that this is the best example of the result of PM Modi’s DBT (Direct Benefit Transfer) initiative. Noting that KR Constituency is seeing a different type of developmental activities, thanks to the initiative of MLA Ramdas, the CM said that this is an example of the MLA’s developmental politics.

Terming Ramdas’ concept of ‘Thayi Garbhadinda Bhoo Garbhadavarege’ (From the mother’s womb to Biosphere) as magnificient, Bommai said that what ultimately stands in our life is the deeds we do for the cause of humanity and well being of people.

Asserting that his Government was committed for saving and sustaining the rich tradition of Mysuru, Bommai  opined that KR MLA Ramdas and Chamaraja MLA L. Nagendra seems to be vying with each other in executing developmental works in their respective Constituencies, which is in fact  the real developmental politics.

Lashing out at those who failed to deliver when in power are now unfairly and unnecessarily targeting his Government, Bommai wanted the people to decide whether they are supportive of developmental politics or cheap politics.

The Chief Minister launched the distribution of various benefits and facilities to beneficiaries under various Central and State Government schemes on the occasion.

READ ALSO  ‘Karnataka Ratna’ to be conferred posthumously on Puneeth Rajkumar on Nov. 1

BJP has won wherever Rahul Gandhi has launched campaign

Earlier speaking to presspersons on his arrival at Mandakalli airport on Sunday afternoon, CM Bommai referring to the ‘Bharat Jodo Yatra’ launched by Congress leader Rahul Gandhi, said that the BJP has won wherever Rahul has launched his campaign. Asserting that there is nothing to worry for the BJP regarding Rahul’s Yatra in the State, he reiterated that the BJP has benefited the most wherever Rahul has gone on a campaign.

Replying to a question on the Congress party’s ‘PayCM’ poster campaign targeting the BJP Government, the CM said that the Congress itself is mired in corruption and the party has no moral right to speak of corruption of others.