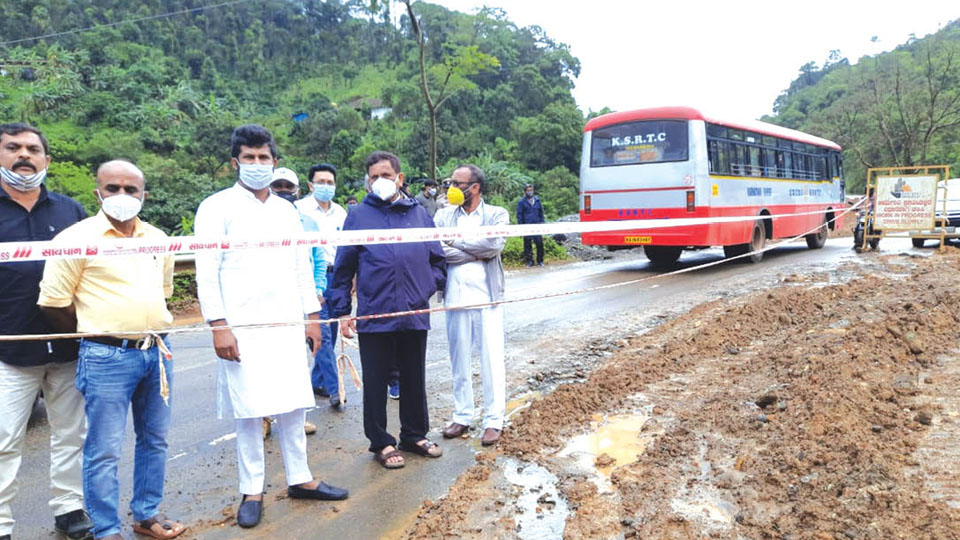 Madikeri: Mysuru-Kodagu MP Pratap Simha has said that experts’ help will be sought to know the reasons for landslide and cracks on Mangaluru Highway during rains and take necessary steps to address these issues.

He inspected cracks developed on Highway near Monnangeri and water spring in the centre of Highway from Madikeri to Mangaluru yesterday. He also collected details from contractors and officials of National Highways Authority of India (NHAI).

Later, Simha told reporters that there had been landslides in Kodagu owing to heavy rains in the last three years. It was planned to build 18 retaining walls up to Sampaje as precautionary however, in the wake of fresh landslides of small scale, as well as suggestion from MLA K.G. Bopaiah it has been decided to build an additional 22 retaining walls till Sampaje.

He said water explosion may be a reason for the cracks on middle of under-construction road at Second Monnangeri and that needs to be ascertained from experts who conduct soil test and make spot inspection. The experts will say whether it is due to increase in movement of vehicles or not.

MP Simha and MLA Bopaiah visited the house of a soldier who was assaulted by a mob last week and enquired his health. The MP said the State Government has taken this incident seriously and there was no question of leaving the miscreants go scot free. Police have been instructed to punish them.

A driver of an ambulance has captured this incident in his mobile phone. Based on the video footage, five persons have been arrested. The Government is always with the soldier and his family, he added.