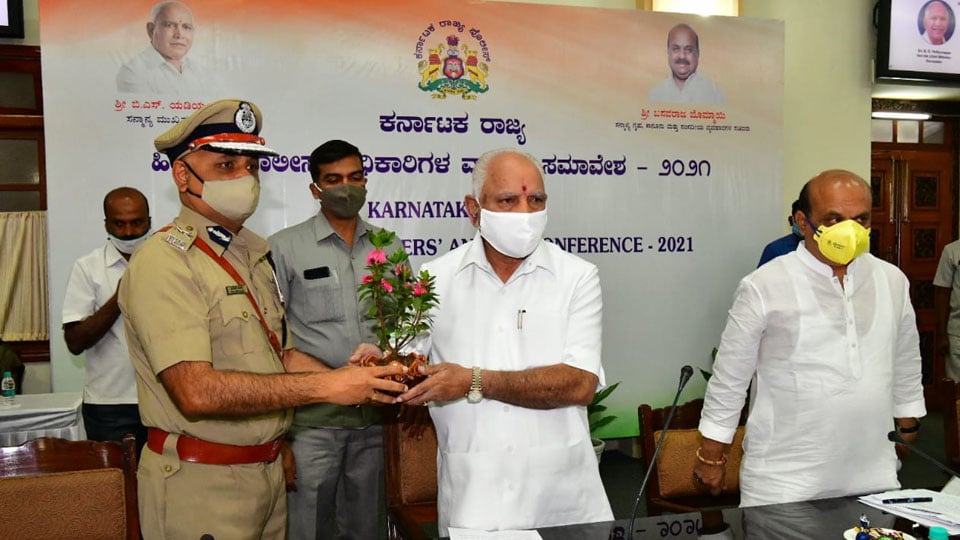 Bengaluru: Karnataka Chief Minister B.S. Yediyurappa said that cyber security may pose a big challenge in the coming days not only in Bengaluru but across the State.

Speaking to newsmen after Senior Police Officers Annual Meet here recently, he said the Karnataka Police was doing exceptional work in the detection of crime. “There are several instances where the Police have arrested the accused within 48 hours, which shows their efficiency. Statistics also show that the number of heinous crimes in the State is decreasing and Karnataka is a safe place for women and children,” he claimed.

“However, the investigation of cyber crimes will be a big challenge for the Police in future. Hence, we have set up eight Cyber Crime, Economic Offences, and Narcotics (CEN) Police Stations in Bengaluru. The Government is committed to equip the Police Department technologically, by providing all required facilities,” the CM said.

Home Minister Basavaraj Bommai said that the Government was planning to bring in legislation to regulate online games and strengthen cyber security. A detailed discussion took place on cyber security which may pose a big challenge in the coming days, he added.

Referring to cyber crime and the dark web, Bommai said this has become the new source for cyber crimes, drugs, and illegal arms. To tackle this, the Police Department has sought additional resources to equip the Police force to fight cyber related crimes. “Cases related to online cheating, cyber phishing and online game addiction by school and college students affecting their studies are on the rise,” he said.

In order to regulate the illegal games online the government is seeking legal opinion.“To tackle this menace comprehensively, the Government is contemplating a detailed legislation. For that a draft Bill is in the making and it is in the final stages,” said Bommai.