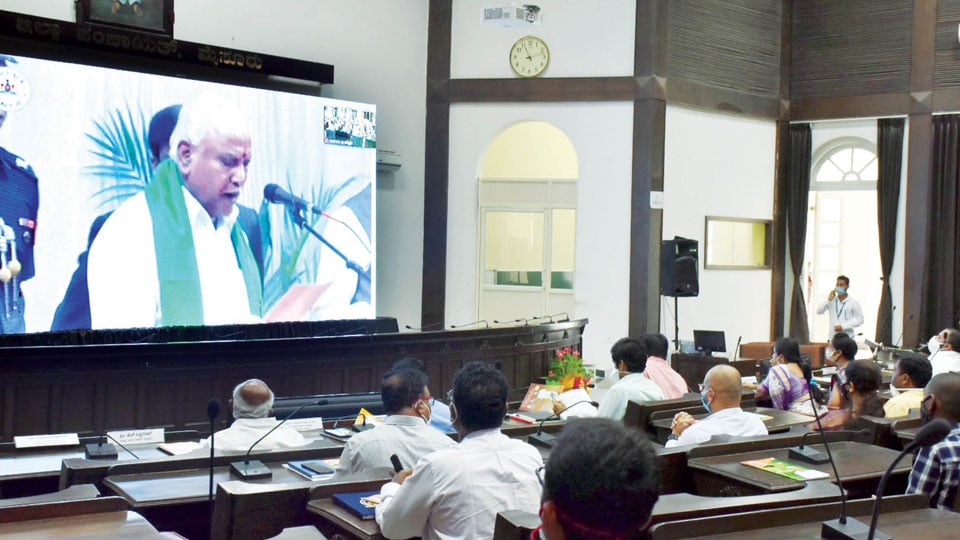 Basavanna from Nanjangud was the lucky beneficiary from Mysuru District to connect with B.S. Yediyurappa

Bengaluru / Mysuru: On the first anniversary of the BJP Government in the State, Chief Minister B.S. Yediyurappa has promised the people that he would work tirelessly for the overall development and welfare of the State.

Yediyurappa was interacting with the people at a virtual programme organised by the Department of Information and Public Relations at the Banquet Hall in Vidhana Soudha, Bengaluru, which was streamed live at all District Headquarters. In Mysuru, the virtual programme was live streamed at the ZP Hall.

Marking the anniversary, Yediyurappa released four books — A booklet titled Savaalugala Ondu Varsha – Pariharada Sparsha (A year of Challenges and a Touch of Solution), a book titled Putakkitta Chinna and Janapada, all in Kannada and March of Karnataka, in English.

Speaking on the occasion, Yediyurappa said that his Government is totally committed to development, but unfortunately, COVID-19 crisis came as a spoke in the wheels, cutting the pace of progress which could have been an easy task.

Pointing out that farmers and weavers are like the two eyes of the State, he said, “It is my dream to make Dalits and backward communities self-reliant. We are taking up housing schemes to ensure shelter for everyone before the completion of Government’s term. Also, farmers are getting Rs. 6,000 as relief on the lines of the Central Government’s Pradhan Mantri Kisan Samman Scheme, under which 50 lakh farmers of the State have benefited.”

Maintaining that National Highway projects are being expedited, he said that the Government has launched a slew of other programmes for improving infrastructure sectors such as power, irrigation and roads. Yediyurappa remembered late Union Minister Ananth Kumar by recalling his contribution for the overall development of Bengaluru.

Yediyurappa further said “One year in office was replete with challenges and yet, I am happy about completing one year. The day also coincides with the birth anniversary of former President of India late A.P.J. Abdul Kalam.

On the occasion, Yediyurappa interacted with beneficiaries in select districts. N.C. Basavanna, a flood victim from Nanjangud was the lucky one from Mysuru District, who is a beneficiary of Rs. 5 lakh flood relief distributed by the Government last year.

During the interaction, Basavanna thanked the CM for the money and wished all success for the Government in the fight against COVID-19. But Yediyurappa’s interaction with Basavanna got disrupted (signed out) three times due to a technical glitch in the link.

Following the interaction, a five-minute documentary on one-year achievements of the BJP Government was screened.