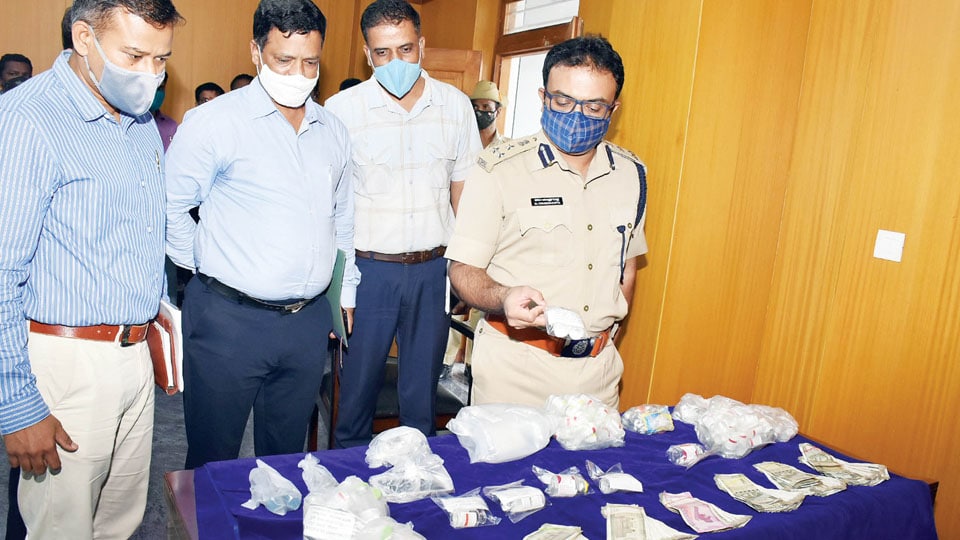 Mysore/Mysuru: The City Police have busted a fake Remdesivir racket by arresting a staff nurse from a reputed hospital who used to source empty vials of the drug, fill them with cheap antibiotics or just saline solution and resell them to needy COVID-19 patients at exorbitant rates.

Many vials labelled as Remdesivir, which is used for the treatment of COVID-19, but actually filled with nothing but paracetamol in liquid form and saline solution, have been seized. Remdesivir is an experimental investigational drug that has been granted emergency authorisation to be administered to critically ill COVID-19 patients.

Of late, the drug has been in huge demand ever since pharmacists ran out of stock and the State Government began supplying it directly to hospitals so that the patients desperately in need can get the injection. Taking advantage of the shortage, black-marketers started releasing the fake drug. Not only in Mysuru, the fake racket is spread across India and there have been arrests of the accused in cities including Bengaluru.

Amidst growing reports and complaints of fake Remdesivir vials making rounds in city amid the resurgence of COVID-19 cases and also reports of vested interests hoarding the injection, a special team of the City Crime Branch (CCB) was formed. The CCB team stumbled upon a large quantity of fake Remdesivir medicine in the house of Girish, a male nurse working with a reputed private hospital, at Vidyanagar, in Nazarbad    Police limits.

Addressing reporters at his office in city last evening, City Police Commissioner Dr. Chandragupta said that Girish was collecting empty bottles of Remdesivir from the hospital where he was working and was refilling them with ‘Cefuroxime’, ‘Ceftriaxone’ (antibiotic), liquid paracetamol and even saline water before selling it to desperate buyers for an inflated price.

He had his own network through which he used to sell the drug and was assisted by a security guard Shivappa and his wife, a housekeeping staff, Mangala. She was working at a COVID Care Centre. “After sourcing the empty bottles from Shivappa and Mangala, Girish used to refill the empty vials with the antibiotic drug and repackage them as original ‘Remdesivir’ and sell them with the help of two medical representatives Prashanth and Manjunath,” he said.

Girish used to spend Rs. 100 to manufacture one vial of the fake injection and used to sell the same for Rs. 4,000. A few people from Bengaluru were in touch with Girish and during interrogation, the Police came to know that Girish was earlier involved in selling fake medicines but no complaints were registered against him.

“Girish has sold over 800-900 fake Remdesivir vials to the needy. We have formally arrested Girish and have continued our investigation and are gathering more details on who bought the fake injections. Only a detailed probe will reveal the names of the persons who have been cheated,” the Commissioner added.

The Police have seized Rs. 2.82 lakh in cash, 41 fake Remdesivir injections of 100mg vials having stickers of various companies, 99 bottles of Ceftriaxone IP injection — used to refill the empty bottles — two empty syringes of 20 ml each, rubber and plastic caps used to repack the vials and two bottles of sodium chloride injection and saline solutions.

A case has been registered at Nazarbad Police Station under IPC Section 276 (illegal sale of fake life-saving drugs), 420 read with 34 (cheating and with common intention) and Drugs and Cosmetics Act-1940 column 27 (illegal manufacture and sale of drugs). CCB will continue the investigation that has inter-city ramifications.