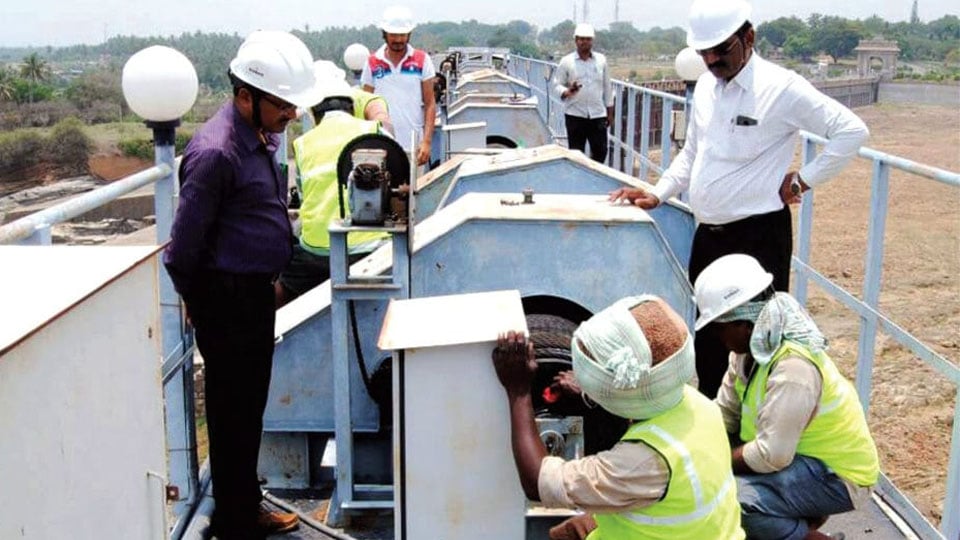 Mysuru: The time has at last come for the replacement of decades old 143 crest gates of KRS Dam, with the Govt. finalising the financial bid for the works.

The Cauvery Neeravari Nigam Ltd. (CNNL) had come up with a plan to replace 143 out of the 173 crest gates (Sluice Gates) of the world famous KRS Dam in Srirangapatna taluk of Mandya district, which were over 80 years old. The CNNL had prepared a DPR of the project, which was estimated to cost Rs.68 crore.

CNNL Superintending Engineer H.C. Ramendra told SOM that three companies had bid for crest gate replacement project, of which Gujarat-based Hardware Groups Company emerged as the successful bidder for the Rs.68 crore project which involves replacement of 143 out of the 173 crest gates of the dam.

The company has the experience of carrying out such tasks at Nagarjuna Sagar Dam in Telangana, Alamatti, Hidkal, Ghataprabha and Narayanapura Dams in Karnataka and elsewhere in the country.

The Technical Sub-Committee by CNNL’s Chief Engineer at Bengaluru which met at Bengaluru yesterday, put forward the financial bid before the Government, which in turn gave its nod. The Government, after giving Green signal for the works, will submit a report to the World Bank in this regard, following which the World Bank will release funds for the project, setting some conditions, Ramendra said.

Continuing, he said that the KRS Dam had 173 crest gates when it was built in 1932. But over the passage of time, there were water leaks in the Dam, despite regular maintenance of crest gates, following which the CNNL had replaced 22 crest gates at a cost of Rs.18.8 crore in 1932. Now the works of the rest of the 143 crest gates, with replacement by new ones, which is estimated to cost Rs.168 crore, will be taken up. The company has been asked to execute the works in nine months time and the CNNL has to pay back the borrowed money to the World Bank in instalments in a span of 25 years, he said and added that the old crest gates will be disposed off by auction.