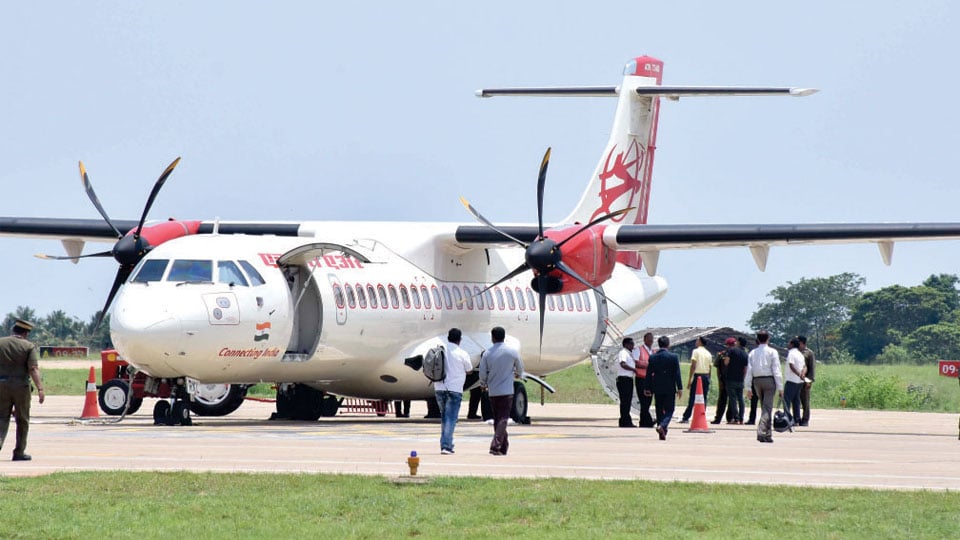 Flights to 3 more cities from Mysuru

Direct flights to Goa, Kochi and Hyderabad daily; Flight to Shirdi next?

Mysuru: There is good news for Mysureans as three new direct, daily flights are being introduced from July 19 to Hyderabad, Kochi and Goa from Mysore Airport in Mandakalli.

These flights will be operated under Regional Connectivity Scheme UDAN (Ude Desh Ke Aam Nagarik). Alliance Air is operating these flights to bolster regional connectivity under “Connecting India,” a mission of Government of India.

There has been a demand for more connectivity ‘from Mysuru’ and ‘to Mysuru’ from other cities which would improve industry and tourism.

Earlier, the Government had announced that there would be flights from Goa, Kochi, Hyderabad and Belagavi but Belagavi has not been introduced yet.

Amongst the three flights, the one that most Mysureans, Travel Agencies and Hoteliers in city were looking forward to was the direct flight to Goa. This flight is not only expected to allow people from Mysuru and neighbouring districts to access India’s most popular beach destination but there is expectation that this flight will be a boost to Mysuru tourism as many domestic and foreign tourists would visit Mysuru on their way to Goa.

Ticket prices: Alliance Air has introduced discounted inaugural fares with Mysuru-Hyderabad fare starting at Rs. 2,100, Mysuru-Kochi starting at Rs. 1,400 and Mysuru to Goa at Rs. 1,900 while the fare from Mysuru-Bengaluru starts at Rs. 1,150.

The boom time at last has arrived for Mysuru city with the introduction of three new flights to Hyderabad, Kochi and Goa. If any city has to develop, then it needs good connectivity and a good airport with lot of flights operating, said Mysore Airport Director R. Manjunath.

He was speaking at an interaction session organised by Mysuru District Journalists Association (MDJA) at Patrakartara Bhavan here this morning.

As the flights to different destinations across the country will increase, it will result in socio-economic development, fillip to tourism as Mysuru is a most sought after tourist destination and export of perishable items like fruits and vegetables which have a good market in other parts of the country and abroad.

One of the prime movers for pushing for the airport development is MP Pratap Simha, who along with District Minister G.T. Devegowda and Tourism Minister S.R. Mahesh along with Hotel Owners Association, CII (Confederation of Indian Industry) BAI (Builders Association of India), and the multitude of yoga centres have always been pushing for introducing more flights connecting international airports, he said.

Mysuru is a tourist hub as there are many interesting tourist destinations close to it that includes Ooty, National Parks like Bandipur and Nagarahole and also a few historic places like Belur and Halebid. A good airport is needed for development of all sectors apart from industry and tourism, he said.

Sharing his own experience of developing the Sikkim Airport which was in a pathetic condition within a year, he said that this resulted in tourism boom and also in employment generation.

The Mysuru Airport is right now located on 510 acres of land and another 240 acres of land is being acquired by the Karnataka Industrial Area Development Board (KIADB). Once the administrative approval is given by the government then the expansion work of the runway at a cost of Rs.700 crore will begin, he said.

The uniqueness of this runway once it is expanded will be that the aircraft will fly over the underpass, which will be one of its kinds in the country like one sees in a few airports across the world, he said.

The Disneyland project at KRS (Krishnaraja Sagar Dam where already there is the beautiful Brindavan Gardens) mooted by the State Government will also draw international tourists in droves once the project is completed. Since there is already road connectivity to KRS from the Outer Ring Road (ORR) close to the Airport, it will be easy for the tourists to go to the Disneyland and return, said Manjunath.

He also revealed that he had discussions with the officials of APMC (Agriculture Produce Marketing Committee) regarding the transportation of items from the Market yard to other places from Mysuru Airport.

Asked about the response to the flights from the commuters, Manjunath said that so far all the flights to Chennai and the newly commenced flights to Bengaluru was very good with 85 per cent of the seats booked. On the facilities in the Airport, he said that medical services had already been introduced and a canteen facility will also be opened to the growing customer strength once more flights start operating throughout the day.