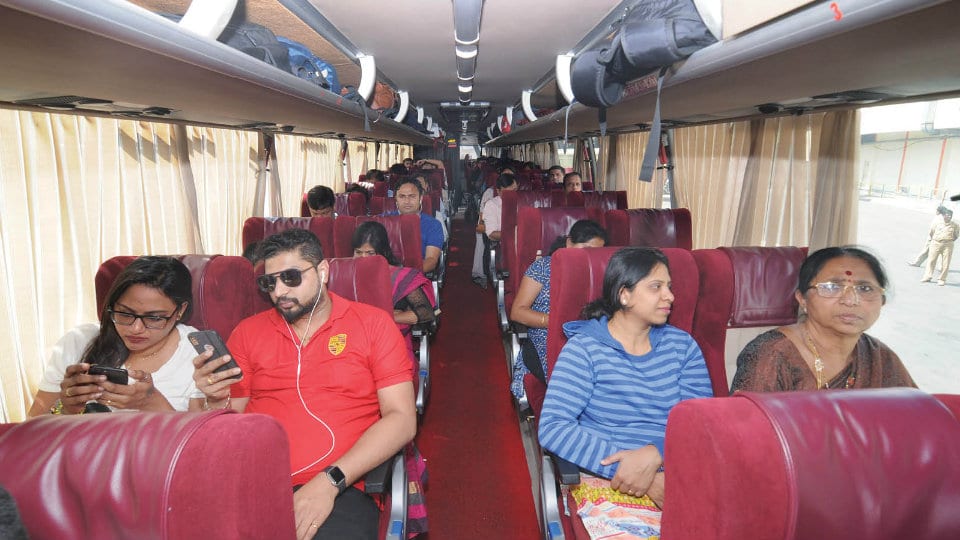 Fly on the Road

The FlyBus service between Mysuru and Kempegowda International Airport (KIA) in Bengaluru is the most sought-after mode of transport between the two destinations. A hassle-free journey, round-the-clock safety and accurate schedule at an affordable price has all the more made the service attractive and reliable for travellers.

The FlyBus service was launched six years ago and earlier, Mysureans used to cough up anywhere between Rs.4,000 – Rs.6,000 to reach the Airport taking private taxis. Now, they just pay Rs.800 per head. In the beginning, the fare was Rs.1,000 per head and now due to popularity, the fares have come down to Rs.800.

Initially, the service faced teething troubles with fewer passengers and KSRTC struggled to achieve a break-even. Now, the service has turned out to be profitable and what more, even the commuters are happy and give a Thumbs Up!

Speaking to Star of Mysore, KSRTC Divisional Controller, Central Division, Bengaluru, A.G. Prabhakara Reddy whose Division manages the FlyBus service, said this luxury bus service is a tremendous success and has generated a lot of revenue.

The FlyBus service will be expanded to include more destinations. On the Mysuru route, we have service till Madikeri. From that Hill Town, people can have a hassle-free travel till KIA. Almost all travellers of the FlyBus have complimented us for a safe and timely travel,” he said.

The KSRTC which started FlyBus service with just one bus twice a day between KIA and Mysuru on Aug.13, 2013 is now operating 11 buses with 20 trips daily. “In the initial days, the response was very poor. However, the service picked up later gradually,” Prabhakara Reddy explained.

With direct bus connectivity between Bengaluru Airport and small towns, KSRTC has registered a sharp spike in ridership between KIA and Mysuru, Madikeri, Kundapur and Coimbatore.

According to officials, even if the occupancy is 50%, the profit per kilometre is almost double. KSRTC spends Rs.49-Rs.50 per kilometre to operate a FlyBus, while it earns a revenue of Rs.85-Rs.90 per kilometre. The buses are equipped with GPS locators that will provide real-time information on expected time of arrival.

Other features include chemical toilet, seats fitted with TV screens capable of streaming over 70 live channels and Video on Demand using WiFi. The buses have artificial leather seats with increased leg room. Passengers can also access information on flight arrivals and departures.

M.N. Umesh of Vidyaranyapuram is a regular passenger between KIA and Mysuru. “FlyBus is the best. It is cheap and safe. We can carry more luggage and travel comfortably when compared to taxis where we end up paying a minimum of Rs.4,000 per trip,” he says.

“I need not get down anywhere and the bus directly connects the KIA. Earlier, I had to book taxis online and wait for long hours at the airport. FlyBus has changed the scenario now,” he says with a smile.

KSRTC officials said timings of these buses are fixed according to the departure and arrival time of popular flights. “As we are receiving an overwhelming response, particularly on Mysuru and Madikeri routes, we are  planning to add two more services to Mysuru and expand to other places,” Reddy said.

6 COMMENTS ON THIS POST To “Fly on the Road”