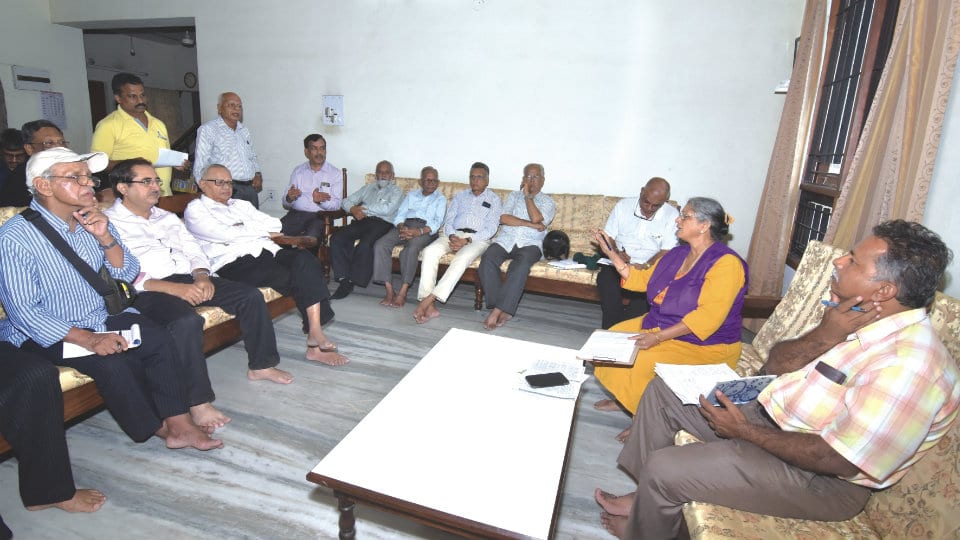 Mysuru: Concession must be given in property tax to those property owners who have Rainwater Harvesting facility at their premises. This was demanded by residents at the monthly meeting of Mysore Grahakara Parishat held last evening at Yadavagiri. The meeting was called to discuss the problems of underground drainage (UGD) faced by different localities.

Participants of the meeting demanded that though the Mysuru City Corporation has been repeatedly asking the residents to install Rainwater Harvesting system and despite this, most of the residents have not complied.

“However, there are residents who have voluntarily installed Rainwater Harvesting facility at their houses in the interest of water conservation and ground water recharging. The MCC must give concession in Property Tax to such residents,” they said.

The rest of the discussions focussed on underground drainage that are constantly blocked especially during rainy season where rainwater gets mixed with sewage and flood the roads in localities. Some members alleged that though the MCC claims that it was prepared for monsoon, nothing is being done to repair clogged drains.

Road users are put to severe hardships due to overflowing drains with two-wheeler riders bearing the brunt. Due to the sewage flow, apart from the stink, road users are exposed to air-borne diseases.

While explaining the grave problems of mismanagement of underground drainage, members said that the MCC officers have no action plan to solve drainage problems especially in MUDA Layouts, slums and settlements, village areas amidst city, revenue and private layouts. The members alleged that the MCC engineers take only temporary measures but have not come up with a detailed plan for a long-term solution.

The discussion focussed on drainage blocks due to plastic and sanitary pads. Such items cause a bottleneck and will result in overflowing sewage, members opined.

There are three Sewage Water Treatment Plants in city and MGP members questioned the functioning of plants. Information about the treatment plant, how much water it is treating daily and for what purpose the treated water is being used must be provided to the public to ensure transparency, they felt.