Home » Columns » For the love of one’s child… 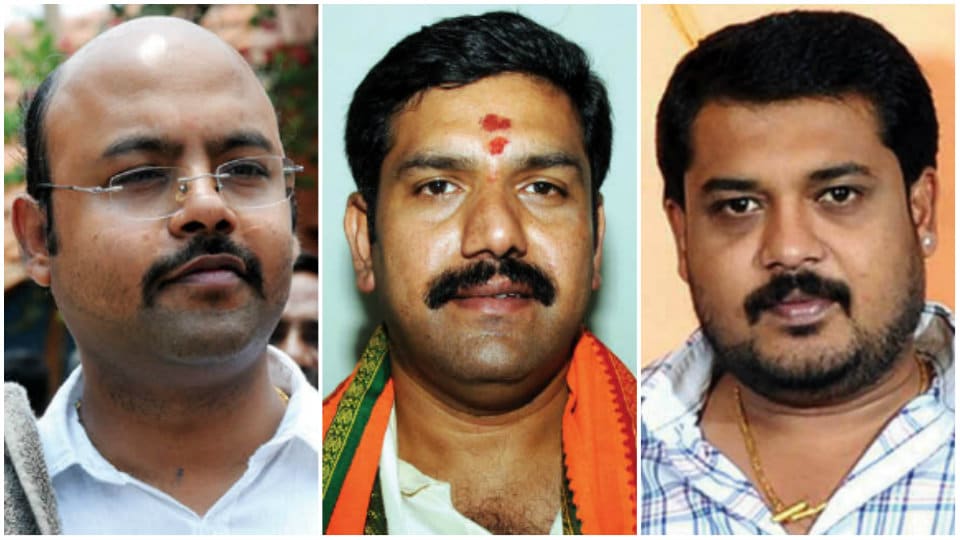 For the love of one’s child…

The Chief Minister confidently states that he will contest from Chamundeshwari constituency, but it lacks conviction. That’s because CM yesterday said, “Though pressure is being exerted on me to contest from North Karnataka, I have decided to contest from here (Chamundeshwari).” This statement makes one wonder if the CM is keeping a window open while saying he has shut the door. If things get too difficult he may say, “I succumbed to the pressure” and move North.

But why does the CM want to leave his constituency Varuna, which he has won comfortably for two terms and opted for Chamundeshwari, where of the 7 times he has lost twice? The answer can only be — for the love of his son Dr. Yathindra.

We wonder why Dr. Yathindra decided to join politics. He looks like he would make a very empathetic doctor rather than a hardcore politician. But then, one can also ask, why not? If someone wants to serve the people they should try.

Yes, Dr. Yathindra has an opportunity to win in Varuna but what happens to his father?  If Siddharamaiah loses Chamundeshwari, it would be an embarrassment for a sitting CM. And if Congress comes to power, he will not be the choice for CM candidate.

Meanwhile, the BJP has pulled a masterstroke by giving the BJP ticket for Varuna to former CM Yeddyurappa’s son Vijayendra.  Initial reports say Vijayendra has a good chance because he is the son of a senior Lingayat leader and there are significant Lingayat votes in Varuna. May be that is why Siddharamaiah, who is not fond of visiting Mutts, spent over an hour at Suttur Mutt, a Lingayat Mutt, yesterday.

Because of BJP’s surprise strategy, what was perceived as CM’s “safe-seat” which he gave up for his son has become an “unsafe-seat.” Also CM’s own Chamundeshwari seat is unsafe as G. T. Devegowda, the sitting MLA of Chamundeshwari, is a tough opponent. So a loss for both father and son is a real possibility. If this happens it would be a deathblow to both their political careers.

Now, while Siddu is busy oscillating between Varuna and Chamundeshwari, where is his close aide Minister Dr. H. C. Mahadevappa? Is Mahadevappa busy at a personal level as he too is trapped for the love of his son?

Inside sources say that Mahadevappa, who has won 5 times from T. Narasipur, wants to give his “safe-seat” to his son Sunil Bose and find another Constituency for himself. He wanted C.V. Raman Nagar in Bengaluru but the local Congress leader there P. Ramesh refused to make way. So where will Dr. Mahadevappa go now?

Dr. M. Veerappa Moily too has fallen for this “love for the son” trap. He wanted his son Harsha Moily to stand from Karkala but there was no response from the party. He got desperate and started spewing anti-party statements. This not only affected the party image but his son had to give up his electoral ambitions. Now, if Congress wins in Karnataka, even Moily’s MP seat is doubtful for the next term.

Meanwhile the BJP, which keeps saying it does not tolerate “bhai-bhatijawad” in politics, has given ticket to both of Yeddy’s sons Vijayendra for Varuna and Raghavendra for an MP seat. No wonder now ex-Minister V. Somanna also wants a ticket for his son Aruna Somanna.

Every party has dynastic politics. BJP should stop saying dynastic politics plagues only Congress and Regional parties. It should not forget  — BJP’s Rajasthan CM Vasundhara Raje’s son is a BJP MP and her sister is a BJP Minister, her mother was a BJP MP. BJP’s Chhattisgarh CM Raman Singh’s son is an MP.  Anurag Thakur, the infamous BCCI President is a BJP MP and son of BJP leader Prem Kumar Dhumal, who was the CM of Himachal.

Maharashtra CM Devendra Fadnavis’ father was a BJP MLC and his aunt Shobha Fadnavis a BJP MLC. Then we have Pritam Munde, daughter of the late BJP Minister Gopinath Munde; she is a BJP MP. Her sister, Pankaja Munde, is a Minister in Maharashtra. Their cousin and daughter of late Pramod Mahajan, Poonam Mahajan is the BJP MP from Mumbai. Then how can we forget Varun Gandhi, son of BJP Union Minister Maneka Gandhi? The list goes on.

While BJP says Rahul Gandhi’s election to Congress Party’s Vice-Presidency was undemocratic, they are mum on Rajnath Singh’s son, Pankaj Singh, being elevated to Party Secretary in UP and also MLA from Noida. In fact, 38 of BJP’s 281 Lok Sabha MPs and 9 of its 56 Rajya Sabha MPs have political lineage. In the Congress, 58 out of 211 and 9 out of 57 are dynastic. This according to a report published in September 2017.

Politics in India today is a family business to be passed on from one generation to the next generation. Constituencies are the new fiefdoms of politicians. The reason why Congress has more dynastic politics is that they have ruled for a long time. BJP on the other hand has just tasted power but they are getting the hang of it quite well. Does anyone doubt that Yeddy will give up his constituency to anyone else other than one of his sons? Will V. Somanna give up his seat to anyone else other than his son?

Politics is war and everything is fair when you want victory. So if a family member can win a seat, he or she will be given a ticket. Who cares if they are encouraging dynastic politics.

These leaders by giving up their constituencies to their children may have built a political home for them, but they themselves risk of becoming politically homeless.