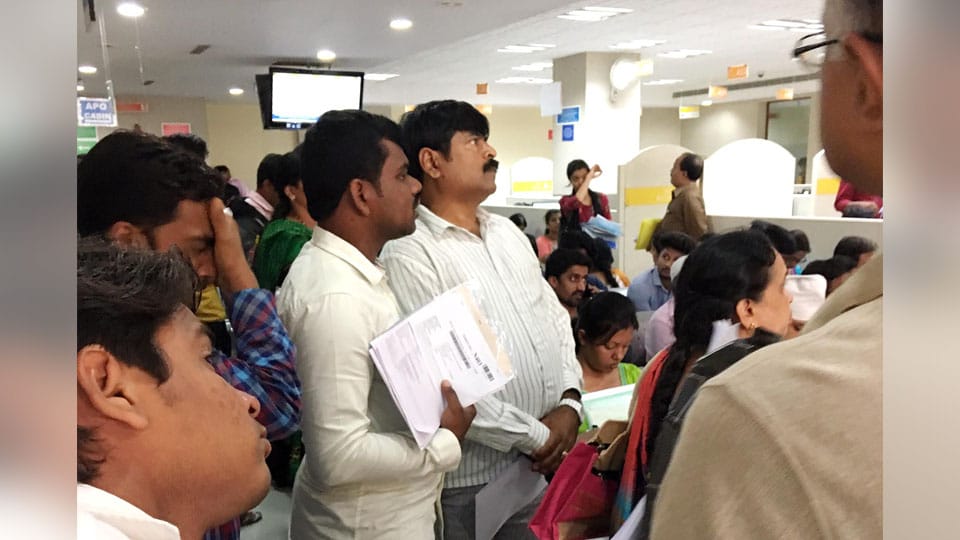 A visit to Passport Seva Kendra

Most of us dread facing a Government official or stepping into a Government office, the reason being anything to do with Government can be time-consuming, stressful, belittling and a traumatic experience.  So I was fearful when I was told that I have to go to the Bengaluru Passport Seva Kendra (PSK) to get pages added to my Passport. But things are different now it is said, so I got excited to see what had changed.

To begin with, the www.passportindia.gov.in is an informative but NOT a bug-free website. Even the call centres tend to give contradictory advice about documentation.  However, I managed to get an appointment in Bengaluru as a travel agent told me that processing of applications from Mysuru takes too long.

I got an appointment for 11:00 am at the PSK on Lal Bagh Road. I got there 5 minutes before the scheduled time and the area outside the office entrance was crowded and chaotic. I peeped into the office and the situation was no different. I was left wondering what was the point of giving an appointment if people are still crowding the place?

On further enquiry, it turned out that along with appointments, the PSK also gives a batch number and there was a small placard with a batch number supposedly indicating which batch was being allowed inside at the moment. This had left many confused — should they take the appointment time into consideration or the batch number?

Also, many people from different batches had the same appointment time. So this ambiguity in the appointment system caused confusion and crowding which made it hard for senior citizens and physically challenged people to get inside and present their application on time.

We wonder why government institutions do not communicate to its customers, the citizens, clearly without any ambiguity. Even simple information like, “all photocopies of documents must be signed by the applicant,” was announced by a screaming security guard only after we were inside, standing in line. And when he made this announcement, people got anxious and begging for a pen began, elbows knocked down documents, papers flew and chaos ensued.

READ ALSO  When Veerappan had to pay a bribe

This is an old habit of our government offices where they do not communicate clearly, instead confuse. Makes one wonder if it is on purpose? Go to any government office — from Excise Department to RTO — one really has to hunt for information about services available and documents needed to get those services approved.

It is this lack of consistency and clarity of information in government offices and services that Indians have turned into “double checkers.” Yes, we don’t trust government signage or rules so we keep asking people — is this the correct train, the correct bus, the correct line, the correct documents, the correct road.  In fact our address methodology is so devoid of sequence or logic that now even Google Maps uses shops as landmark to help us locate an address!  Yes, the voice says, “Take a left at Iyengar Bakery to get on to 4th Main Road.”

That is why Indians, over the years, have simply stopped reading signage and prefer to ask strangers for information. We ‘crowd source’ even basic information. We ask three people the same question and use law of averages to make a choice… just to be sure. The very fact that the big Military Security Booth at the entrance of Kempegowda International Airport in Bengaluru has a sign that says “Please don’t stop for enquiry” is a proof that we Indians desperately seek clarity on what to do and where to go, even at the risk of approaching edgy uniformed men, wielding heavy artillery and have “when in doubt… shoot it out” orders.

Now, back inside the PSK office. There are three counters A, B and C.  As soon as you enter, you get a token number and then you stand watching the multiple TV screens for your number to pop up. The problem is that all the numbers for two counters are displayed on the same screen and so it’s a harrowing exercise for your eyes.

To reduce the confusion they have an announcer who calls out token numbers. The problem is there are also other guards calling out numbers. But instead of a mike, they scream their lungs out. All this cacophony makes one feels like they are sitting at a very badly organised Tambola tournament inside a hall with terrible acoustics and ventilation. Again, this is a bad form of communication, forcing customers to “double check” with their neighbours.

In the first counter, the ‘A counter’, they take your photographs and finger prints and then ask you if you want to get SMS updates for a additional fee of Rs.50.  ‘Counter B’ is where your documents are verified. ‘Counter C’ is where your application is accepted. Then finally there is an ‘Exit Counter’ where you take your acknowledgement. This whole process took five hours but the time spent at all the counters put together was not more than 5 minutes, the rest was just waiting around standing as there was shortage of chairs!

But one has to appreciate how far we have come. The office had information kiosks. It had self-service photocopying machines. Photo is clicked, documents scanned and uploaded by an official within minutes. There is a small café, but it was defunct and no one knew what made it inconvenient for senior citizens and children.

If only the movement between counters was faster and if people were directed properly and informed clearly about which documents to bring, where to sign and which batch is being processed, PSK would become more efficient than it already is and less like a harassment which other government services are stuck being. As of this morning, I got an SMS saying my Passport has gone to print. Yes, things have indeed changed for the better.