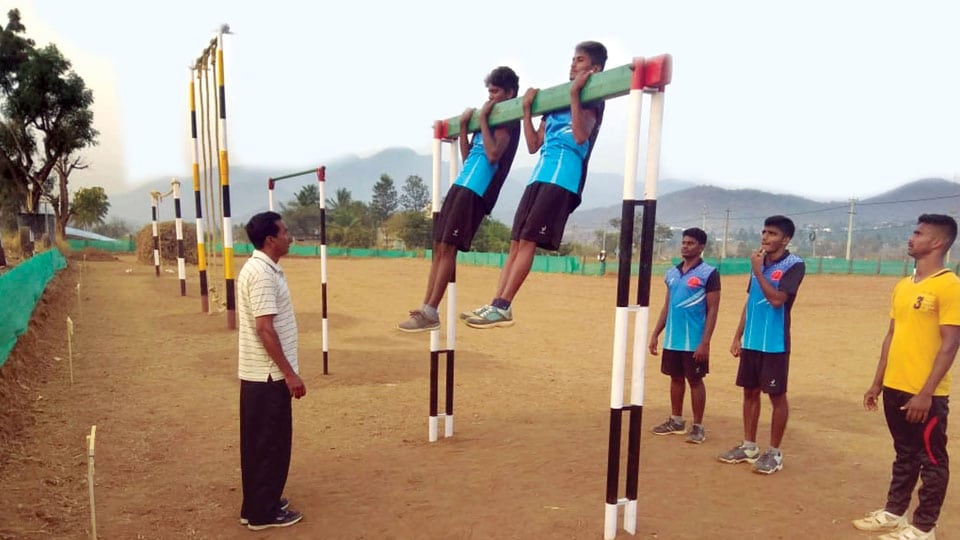 For youths of Maartalli in Chamarajanagar Serving NATION is Serving GOD

If Maartalli in Chamarajanagar District bordering Tamil Nadu rings a bell in the ears thanks to forest brigand Veerappan menace and the infamous Kichguth Maramma Temple mass food poisoning tragedy, a group of ex-servicemen is striving hard to erase the blemish or call it a black mark acquired by the village knowingly or unknowingly.

The group of soldiers want to regain Maartalli’s distinction by producing a large number of soldiers and contributing substantially to the Armed Forces. Since ages, the village — one of the backward areas of Karnataka — has produced hundreds of soldiers and serving the nation is next to Godliness — serving the Nation is like serving God.

Visit the village at any given time and during any season, you find at least a hundred soldiers — serving ones and retired. It is called “Yodhara Grama” (Soldiers’ Village). The love or call it passion to join the Armed Forces has come as a hereditary quality for many. Ask a majority of teens at Maartalli, they will tell you that they want to join the Army.

Army is a religion

Armed Force is a religion for the villagers here that has 70 percent Christians and 30 percent Hindus and Muslims. Even by a conservative estimate, Maartalli has 65 retired Army men and 45 serving members. The village went into notoriety after it contributed many men to the gang of brigand Veerappan who had spread terror in the woods belonging to Karnataka and Tamil Nadu for decades.

Maartalli falls in the belt where forest brigand Veerappan was active. It is a different story that the brigand has been killed now and most of his gang members are either dead or in jail or have chosen the path of reformation. But the blemish Maartalli has got after many of its children joining the brigand gang would take some time to be erased in public memory.

Soldiers from Maartalli have fought in major wars including the Indo-Pakistan war of 1965, the Bangladesh war of 1972, Operation Blue Star in Golden Temple, Punjab in 1984 and the Kargil War in 1999. Many of them have made the supreme sacrifice and have received heroic reception when their dead bodies were flown into the village.

Maartalli earlier was a part of Madras (Erode) Regiment of the Indian Army and it is the biggest village between Kollegal and Male Mahadeshwara Hill. After the Karnataka State was created, Maartalli came to Karnataka’s share. Predominantly, Christians live in this village and the place has sizable number of priests, nuns, teachers, Police Constables, backhoe operators and even people who have expertise in working in mines and quarries. One of the motivating factors for many people joining the Army from Maartalli is that Chamarajanagar is counted among the backward districts in Karnataka and getting a job is not easy unless one takes up agriculture. Taking up farming too is difficult in the absence of rains and the district is drought-prone. That’s why many youths prefer to join the Armed Forces — necessity, combined with passion.

Now the same passion is being rekindled by a group of retired soldiers who have opened a training centre to train Army-aspiring youths. Over 65 enthusiastic youths are presently undergoing rigorous training at the centre and the village will soon regain its glory as the “Yodhara Grama.” Soldiers from Maartalli have served in Madras Regiment, Maratha Regiment, Corps of Electronics and Mechanical Engineers and Madras Engineering Group.

The training to aspiring Army soldiers is being offered by Army Association Trust, functioning under the guidance of Senior KAS Officer and former Chamarajanagar Additional Deputy Commissioner C.L. Ananda, himself an ex-servicemen having served the nation for over 15 years. The Trust is run with the financial contribution made by retired soldiers and the ones who are serving the Armed Forces.

The Trust has taken one acre of land near Sulwadi Government Hospital for a lease of Rs. 2 lakh and has been training youths from Maartalli, Jaageri, Kaudalli, Jallipaalya and surrounding villages. Five ex-servicemen are providing the training — predominantly physical — to meet the Army standards.

While retired Subedar Maria Joseph manages the training centre, retired Havildars Arun Kumar, Manikam, Madalaimuthu and David Rajkumar are taking charge of the training. Not only this, even soldiers who come to Maartalli on leave too train the aspirants.

Military camp-like structures have been set up at the land and the training is being provided on all days of the week from 6 am till late in the evening with a Sunday holiday. Tasks of the training include crossing the obstacles, 9-ft ditch jump, scaling and alighting the vertical rope, horizontal rope, zigzag balance and crawling. An hour’s briefing is held daily to improve the mental skills of the aspirants like they do in the Army.

READ ALSO  Plea to set up Natl. Institute of Pharma Education and Research in Ch.Nagar

The youths, who are being trained are between the age groups of 17 – 25 years and have been divided into general duty, technical, clerical and territorial army. After training, the trainees will be taken to various recruitment rallies. To provide basic facilities to the trainees, daily 100 litres of water is being purchased.

“We are looking for donors to donate money for this cause. The Trust will soon get a five-acre land and a proposal has been sent to Chamarajanagar Deputy Commissioner by C.L. Ananda,” said Maria Joseph.

Ananda said that though many people want to join the Armed Forces, they lack suitable guidance and training. “The Army Association Trust is doing good work in this regard and very soon, the village of Maartalli will be a Yodhara Grama in true sense,” he added.

Among the Army-men from Maartalli, who have achieved stellar performance while defending the nation from terror groups, infiltrators and enemy soldiers, is Lance Havildar Luis Periyanayagam who has been decorated with Shaurya Chakra at the Defence Investiture Ceremony held on Apr. 26, 2010 at Rashtrapati Bhavan in New Delhi. The award was conferred on Luis Periyanayagam by the then President Prathiba Patil.

He hails from Sandanapalya village near Maartalli and was born to Rajamanikyam and Mariamadalena couple. The family depended on agriculture and theirs was a hand-to-mouth existence. To supplement the family income, Luis Periyanayagam used to work in quarries, breaking stones and at the same time continued his education.

Luis Periyanayagam was later appointed as Junior Commissioned Officer and served in Uri sector in Jammu and Kashmir. At present, he is serving in Hassan at 15 Karnataka Battalion NCC.