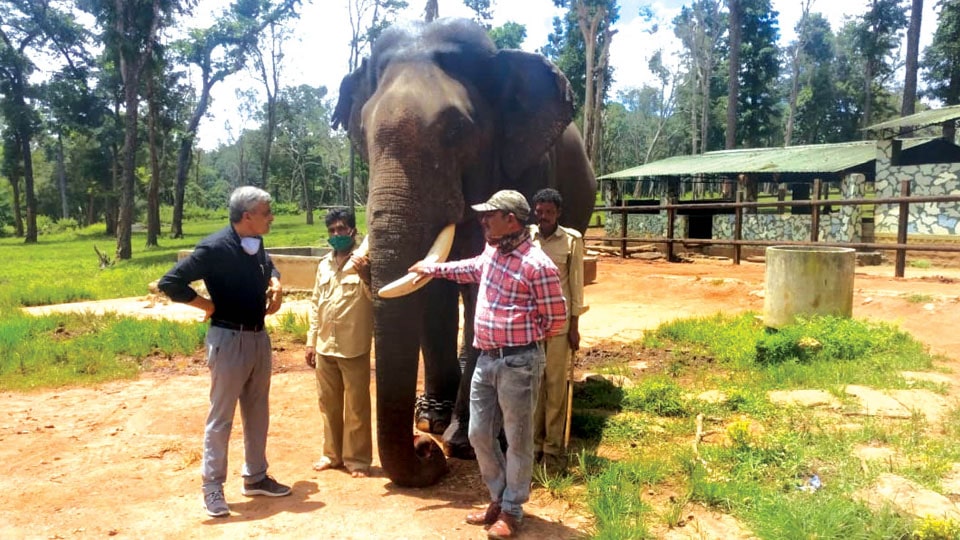 Mysore/Mysuru: Following the decision taken by the State Government to celebrate Dasara in a simple manner without much fanfare this year and limiting the Jumboo Savari only to the Palace premises, the Forest Department has begun the process of selecting the elephants to participate in this year’s Dasara festivities.

After the arrival of Dasara elephants, their weights would be checked and would be put on nutritional diet besides commencing the training to familiarise them the Jumboo Savari route and also to make them get used to the crowd and noise, which was being witnessed by hundreds of people. But this year, the public are a disappointed lot as the training and the final rehearsal will be held in the Palace premises.

After the State Government decided a simple Dasara this year, the Forest Department has begun the selection of five elephants for this year’s Dasara and a team of Forest officials, yesterday visited various elephant camps and inspected the elephants.

As the entire responsibility of Dasara elephants is bestowed on the Forest Department (Wildlife), Mysuru, the officials comprising Deputy Conservator of Forests (DCF) Alexander, Naragahole Tiger Reserve Veterinarian Dr. Mujeeb and others visited Mathigodu, Anekadu and Dubare Elephant Camps and inspected the elephants besides checking their health conditions.

Continuing, the DCF said that two more elephant camps would be visited today, health conditions of elephants would be checked and a list would be prepared. The final list of elephants participating in this year’s Dasara festivities would be decided at the meeting to be held in the next two days, DCF Alexander added.

As the experienced and senior elephant Arjuna, which had the responsibility of carrying the whooping 750-kg Golden Howdah during Jumboo Savari several times, has crossed 60 years of age, Arjuna cannot be given the task of carrying the Golden Howdah as per the Supreme Court directive. Hence, the Forest Department authorities have decided to replace Arjuna with 53-year-old Abhimanyu, who is well-known as the  ‘Combing Specialist.’

The Forest officials, who visited Mathigodu Elephant Camp where Abhimanyu is housed, checked his health and also observed his behaviour to ascertain whether he was in musth. The officials later visited Anekadu Camp and inspected Pattada Aane Vikram and Kumki elephant Vijaya, Gopi and another Kumki elephant Kaveri at Dubare Elephant Camp.

The Forest officials will be visiting Rampura Elephant Camp at Bandipur Reserve Forest where Arjuna and other elephants are housed and would check their health conditions later in the day.