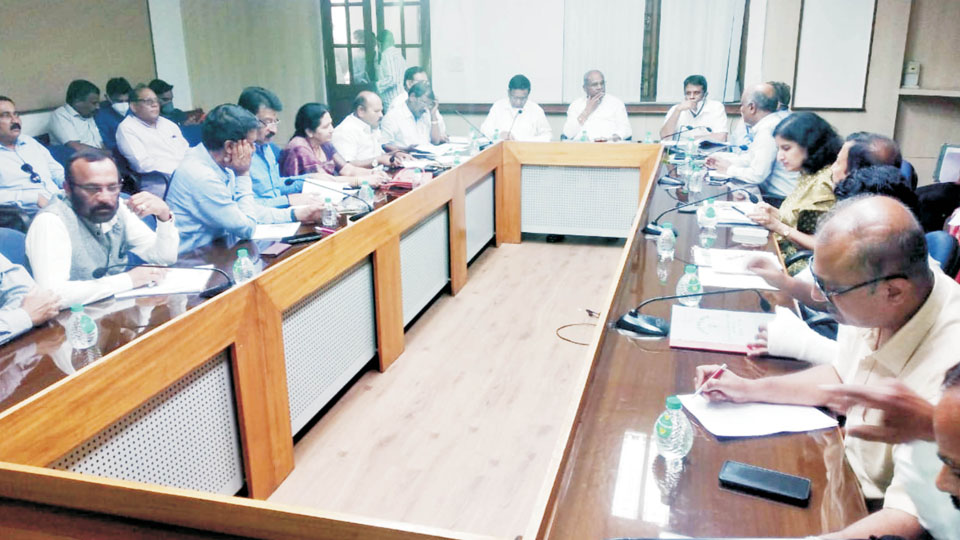 Holds discussions on elephant menace in Kodagu and problems of daily wagers in Hunsur Forest Dept.

Madikeri/Hunsur: Problems pertaining to elephant menace in Kodagu and issues of daily wagers of Hunsur Forest Department were discussed by MLAs at a high-level meeting held with Forest Minister Umesh Katti in Bengaluru on Tuesday.

Virajpet MLA K.G. Bopaiah said that the menace of wild elephants had increased in the district. “As Kodagu receives heavy rains, it is very difficult to maintain elephant trenches to prevent them from entering human habitats. The menace can be controlled only if the elephant trenches are maintained annually. Solar fences have failed to prevent wild elephants from entering villages and towns and hence steps have to be taken to erect rail barricades as a preventive measure,” the MLA added.

Madikeri MLA Appachu Ranjan, who also spoke, said that food and fodder for wild elephants in the forest had decreased due to teak plantations and added that even a sparrow will not build its nest on teak trees.

Chairman of Karnataka State Western Ghats Task Force, Ravi Kushalappa, who too was present at the meeting said that due to menace of wild elephants and other animals, residents of six villages in Sakleshpur taluk have come forward to give away a total of 2,400- acre agricultural land to the Forest Department.

“If the Government provides adequate compensation to the agri lands, it would help in linking Pushpagiri-Kuduremukha Reserve Forests. Also, it will help in expanding the elephant corridor project as well as the forest cover,” Kushalappa said. There are 230 tribal hamlets in the State, he said and urged the Government to provide basic facilities under the purview of law to these hamlets.

Minister Umesh Katti said that Rs. 100 crore has been reserved in the budget to prevent man-wild animal conflicts and steps have to be taken by the Forest Department officials to implement it.

MLC Veena Achaiah urged Minister Umesh Katti to chair a meeting in Kodagu to which the Minister said that a meeting chaired by Chief Minister Basavaraj Bommai will be held after the conclusion of the ongoing session in Bengaluru.

At another meeting with the Forest Minister, Hunsur MLA H.P. Manjunath spoke about the problems faced by daily wagers of Hunsur Forest Department.

The daily wagers, serving at Nagarahole Reserve Forest, had staged an overnight protest urging the Government to fulfil their various demands including releasing their pending four months’ salary.

MLA Manjunath urged the Forest Minister for timely payment of salaries of daily wagers serving in the Forest Department and to take steps to prevent menace of wild animals in villages bordering the forest.

Reacting to MLA Manjunath, Minister Umesh Katti assured of releasing compensation to the families of forest staff and also the pending salaries of daily wagers.