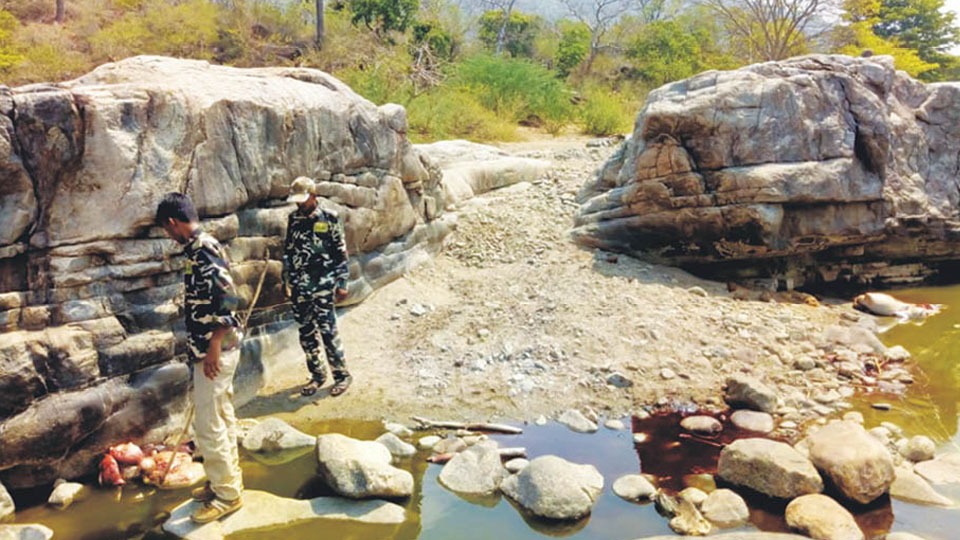 Hanur:  In a major haul, the Karnataka Forest Department has managed to confiscate a huge haul of over 400 kg of wild meat besides arms and snares used for hunting on the Karnataka-Tamil Nadu Border. However, the poachers managed to escape.

Yesterday afternoon, the Forest Department staff from MM Hills Wildlife Sanctuary exchanged fire with poachers, suspected to be in a group of three to four, across Palar River that divides Karnataka and Tamil Nadu.

On specific information that poachers are killing wild animals to sell the meat, Department staff was on high alert. Moreover, since the past three to four days they were hearing gun shots from deep inside the jungle.

Last afternoon, a forest team noticed the movement of poachers in a jeep and when the poachers spotted the forest team standing across the river, they opened fire. The forest team took cover and retaliated.

When the Department staff rained bullets, the poachers ran into the forest and escaped. Officials later crossed the Palar River, entered Tamil Nadu and confiscated the items that were left behind by the poachers. Nearly 400 kg of dry and fresh meat was stacked in bags and kept in the jeep. A firearm has been seized from the spot along with snares and knifes, a forest official said.

To their shock, officials found a portion of the Palar river red in colour due to blood spilt by poachers while cleaning the meat. Several animal parts were also found. Once cleaned, the meat was stuffed into gunny bags and loaded into the jeep to be transported to towns and cities in Tamil Nadu where there is high demand for wild meat.

READ ALSO  One killed, more than 10 injured as vehicle falls into gorge

Officials suspect that the poachers may have been camping at Erode Range for more than two days. The border area does not have enough protection measures or staff. The seized jeep, meat and other materials have been handed over to the Range Forest Officer of Erode. Forest officials said that most of the meat was of deer.