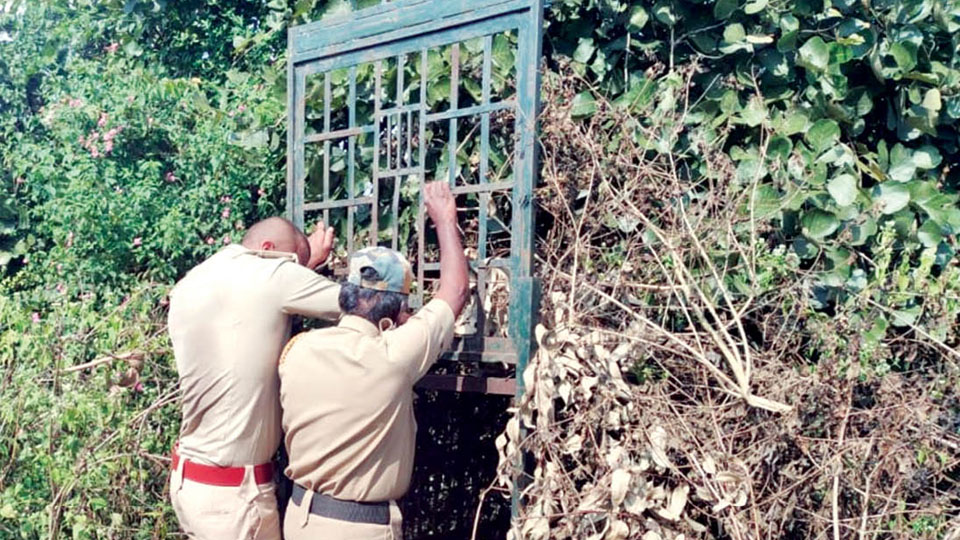 Mysore/Mysuru: Leopard menace since the last one-and-a-half-months on the periphery of the villages and two people falling victims to the feline has triggered panic in T. Narasipur Taluk even as the Forest Department has upped efforts to rescue the animal.

The Forest Department has decided to follow some of the standard operating procedures prescribed by the National Tiger Conservation Authority. More than 130 personnel, including the Special Tiger Force Squad, are camping around the vicinity of the villages with advanced equipment including camera traps and night vision binoculars.

Though the officers and staff conducted operations in over 20 villages since the last four days, there has been no sign of the feline. On the other side, villagers are locking themselves up inside their homes after 6 pm and during the day, they are moving around in groups carrying knives, clubs and sickles.

Children are restricted to the compounds of their homes under the watch of their parents and siblings. Awareness is being created among villagers not to venture out of their homes after 6 pm and always go in groups, even to their sugarcane fields.

The first victim was Manjunath, who was attacked at M.L. Hundi Mallikarjuna Hill where he had been to take selfies on Oct. 1. The second victim Meghana was killed on the evening of Dec. 1 at Kebbehundi when she had come out of her house.

Over 43 villages from 23 Gram Panchayats have been identified and surveillance is on in 20 villages. Teams have been formed under one Conservator of Forests, 2 Deputy Conservators, 15 Assistant Conservators, Range Forest Officers and staff. There are sharp-shooters in the team and the authorities have already sanctioned the shoot-at-sight orders.

This has made the Department staff to focus on M.L. Hundi and according to officers, it appears to be the same leopard whose images were captured by the camera traps when the first killing took place. Even the pug marks traced from the place of two killings and the ones spotted at M.L. Hundi are of the same feline, said Chief Conservator of Forests, Mysuru Circle Malathi Priya.

“Combing operations have continued in and around Kebbehundi where Meghana was killed and at M.L. Hundi where Manjunath was killed. We have deployed drones for aerial monitoring as it is difficult to access the undulating and rocky terrain,” she added.

Malathi Priya said that the Department had sent a request to Mysuru Deputy Commissioner Dr. K.V. Rajendra to initiate the harvest of standing sugarcane crop in 23 villages as the unharvested fields are giving the leopard a perfect place to hide.

“The DC has responded positively to our request. With fully grown and dense sugarcane, it is also difficult to monitor the feline movement and also trace its pug marks,” she added.

Yesterday, Principal Chief Conservator of Forests (Development) Rajiv Ranjan, who is holding concurrent charge of PCCF (Wildlife and Chief Wildlife Warden) visited T. Narasipur and interacted with officials on the combing operations. He assured that one member of the families of Manjunath and Meghana will be provided a job.