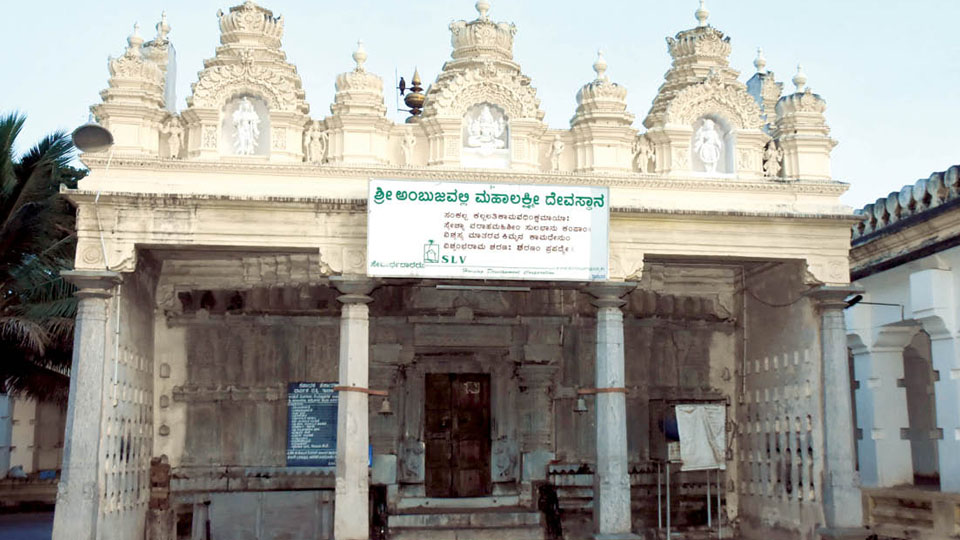 Only 50 percent of works done; lack of funds one of the reasons

Mysore/Mysuru: The ambitious plan of restoring paintings and murals at the temples inside the Mysore Palace premises to increase their aesthetic value has come to a grinding halt. One of the reasons for this is lack of funds.

The project was to restore the art pieces, century-old oil paintings, stained glass windows, frescoes, paintings of Gods and Goddesses that are tangible pieces of history and culture.

The project began at the end of 2021 and the task was handed over to National Research Laboratory for Conservation (NRLC) of Cultural Property, Lucknow, which entrusted the work to its Regional Conservation Laboratory in Mysuru. The Department of Archaeology and Museums initiated the conservation works.

As part of the efforts, the conservation and restoration works were taken up at Sri Varahaswamy and Sri Ambujavalli Mahalakshmi temples. These temples were originally built by the Hoysalas in Srirangapatna and the original idols were brought and installed at the Palace temples in 1811 by Chikkadevaraja Wadiyar. Many paintings suffered damage because of the large number of visitors touching the paintings. Also, damage has been caused due to water leakage, high moisture content and extensive use of incense sticks, dhoop and also camphor inside the temples for rituals.

Staff from the Regional Conservation Laboratory, headed by Senior Conservator Biyas Ghosh, had taken up the works in September 2021 with other members of the team Senior Assistant Conservator Nithin Morya, Suresh Dixit and S.V. Sahana.

But now the project has been left incomplete though certain stages of the restoration works have been completed. Works included restoring tears and white patches on the canvas, removing dust and fungal growth and filling cracks in the paint that were caused by increased humidity.

Natural colours have been used on the walls of the temples, ceiling, pillars and wooden cupboards and due to lack of maintenance, these colours have faded and also have been chipped off from the original pieces.

As part of the restoration, the team cleaned the surroundings of the art work and then plastered the painting chips so that they do not fall off. Later, the gaps were filled to recreate the art work.

Many paintings are more than 200 years old and some are fungus-infested. The oil used in the paintings has flaked or peeled off and there are also lime deposits on the canvas. As per the project guidelines, the team has documented them by recording their physical and chemical properties. Later, compatible materials were used so as to not spoil the original.

The next phase of the works included repainting of the art works using natural colours. An officer from the Department of Archaeology and Museums told Star of Mysore that the team had completed 50 percent of the works and the works have come to a standstill since April this year. If the project continued, most of the restoration works would have been completed by now.

The officer said that as per the agreement with NRLC, Rs. 14 lakh has been paid to the restoration task and the second stage of paying Rs. 15 lakh is pending due to financial constraints.

“Also, the NRLC and Regional Conservation Laboratory have a staff shortage and their director has changed. All these factors have contributed to the stoppage of works. We have already communicated with the NRLC to restart the restoration works. We will again communicate after a week,” the officer added.