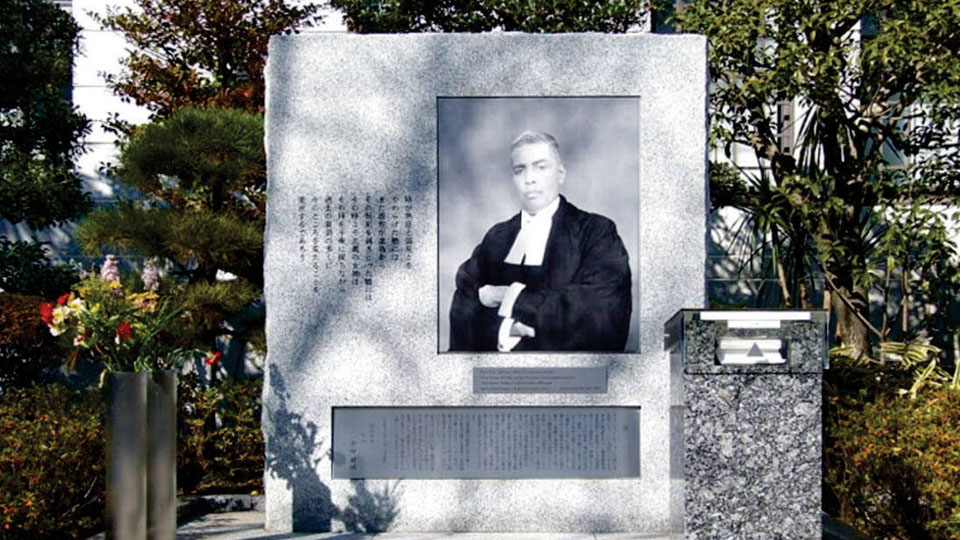 Forgotten in India – A Hero in Japan Justice Radhabinod Pal

The United States dropped an uranium atomic bomb on the city of Hiroshima on 6th August 1945. Nearly a lakh of civilians died instantly or were severely injured. Another plutonium atomic bomb was detonated over the city of Nagasaki on 9th August 1945 with a similar devastating effect. This resulted in Japan’s announcement of an unconditional surrender to the US Forces, on 15th August 1945. The supreme commander of the allied forces, Gen. Douglas MacArthur, received the formal instrument of surrender on 2nd September 1945 on the US naval ship Missouri, and he continued as the military administrator of Japan. The General arrested all the main decision-makers like the Prime Minister, Chief of Military and a number of others and imprisoned them. One of the main accused was General Hideki Tojo, Prime Minister of Japan (1941-44).

The US and the allied powers were keen to punish the top decision-makers in the Government and the military who started the war.  They called them the war criminals. They constituted the International War Tribunal for the Far East, on the lines of the Nuremberg Trials of Germany. The Tribunal had eleven Judges drawn all over the Western world and British Commonwealth. The Judges came from England, France, New Zealand, United States, Philippines, India etc.  Popularly known as the “Tokyo Trials”, the trials started on 14th May 1946 and lasted for two-and- a-half years. The final judgement was delivered in November 1948. The defendants included former Prime Ministers, Foreign Ministers and prominent military Generals who were involved in the decision- making to wage and continue the war.

The Tokyo War Trials were long and went on for more than two years. The trials had 816 sessions, more than 4,000 witnesses and 48,412 pages of transcripts.  The sentences were pronounced in November 1948.  Slowly each of the Judges pronounced the defendants to be guilty. The 11th Judge thundered “NOT GUILTY” and stunned ten other brother Judges and the whole Courtroom.  The man who gave the dissent and exonerated all the accused was “Justice Radhabinod Pal” from India.

Justice Pal was born in a small village in present day Bangladesh and educated in Calcutta.  He worked as a Professor of Law, retired as a Judge of Calcutta High Court and later was appointed as the Vice-Chancellor of Calcutta University. He was known for his legal erudition and expertise in international law. He was nominated as a Judge on the Tokyo War Tribunal by the then British Government of India in 1946.  Justice Pal wrote a lengthy dissenting judgement of 1,250 pages. It seems that Jurist Pal rarely went out of his hotel room in Tokyo and personally typed his lone lengthy dissenting judgement. He felt that the trials themselves were illegal. He opined that like the European countries who had Colonies, Japan too was entitled to acquire its own Colonies. He pointed out that Japan cannot be tried for crimes against humanity.  He felt that the large devastation and deaths inflicted by the American atom bombs were as much, if not greater, crime against humanity.

READ ALSO  A TRIBUTE: Dr. N.M. Srinivas and his passion for tennis

He gave a number of arguments terming the Tokyo War Trials as irregular and illegal.  Justice Pal’s dissenting opinion was severely criticised all over the western countries. Pal’s view was “aggressive war was reasonable because it is about National Sovereignty”.  He pointed out that the Western countries acquired their Colonies by brutal wars and hence did not have a moral right to stand in judgement.  He was of the opinion that conquerors should not pass judgement on the conquered and the Tokyo trials were more of a victor’s revenge. In his judgement, Pal was very severe towards Japan too, but his criticism of the US was very serious.

The War Tribunal and the Western Governments did not like the dissenting opinion of Justice Pal and decided not to publish his 1,250-page-long judgement.  Japan signed a Peace Treaty with the United States in 1952, and the military administration of Gen. Douglas MacArthur ended, and Japan was once again a sovereign free nation.  Soon afterwards the Japanese Government published the 1,250-page-long dissenting judgement of Justice Pal.

After the Tokyo Trials, Pal was elected to the UN International Law Commission, where he served illustriously from 1952 to 1966. Japan felt very grateful to Justice Pal.  The Emperor bestowed on him the nation’s highest honour “Order of the Sacred Treasure” in 1966.  He was invited twice more to Japan for lectures. The Government of India honoured him with the title “Padma Vibhushan.”  After his death, the Japanese Government erected a memorial for Justice Pal in “YASUKUNI SHRINE”,  which is a memorial for the National and War   Heroes of Japan.  When Prime Minister Abe visited India, he went to Calcutta to meet the son and family members of late Justice Pal.

READ ALSO  A TRIBUTE: Dr. N.M. Srinivas and his passion for tennis

For his dissenting judgement exonerating Japan, Jurist Pal was highly criticised and vilified all over the Western world.  But Justice Pal had the courage of conviction to go against the opinion of all the ten of his fellow Judges and the wishes of the allied powers of the United Kingdom, United States and Russia. This  Indian Judge showed exemplary courage in telling the world that in a war, there is no ‘good side’. Justice Radhabinod Pal is almost forgotten in India but remains a greatly admired and adored hero in Japan.