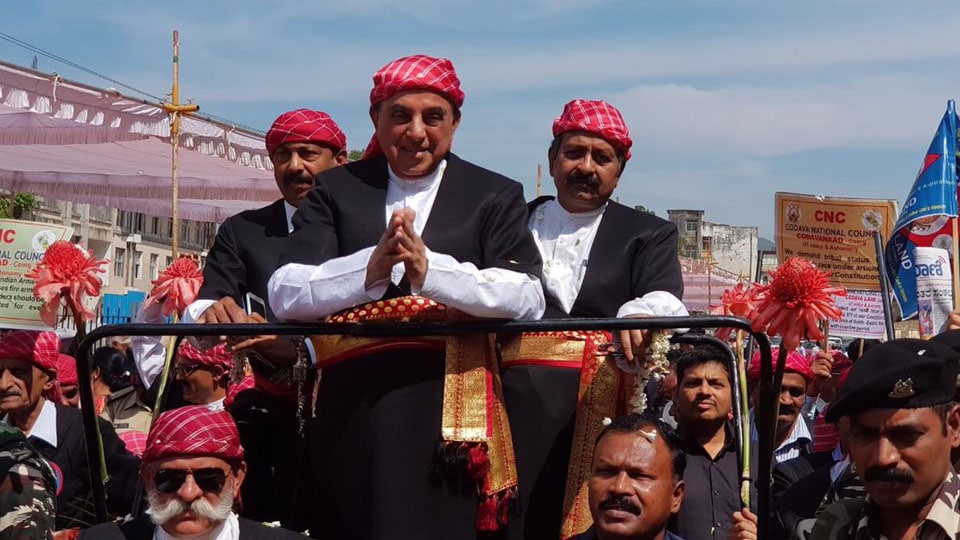 New Delhi: BJP leader Dr. Subramanian Swamy has urged Prime Minister Narendra Modi to immediately declare Ram Setu as National Heritage Monument. In a letter to Modi, Dr. Swamy pointed out that within a week, Election Commission is going to announce the Model Code of Conduct for the Lok Sabha polls and this decision should be announced immediately.

For the past two years, Dr. Swamy has been reiterating his demand to the PM, saying that the file is just pending in his office waiting for his approval.

“As we are approaching the date of announcement of the General Election to the Lok Sabha and onset of the Model Code, I wish to draw your attention to the two pending decisions for the Government which have great attractive value for the people of India,” said Dr. Swamy.

The second was the formation of Administrative Development Council in Coorg (Kodagu), which is the long-standing demand of the Kodava community.

“The first is the long pending reply of the Government to my Writ Petition in the Supreme Court in which Notice to Government had been issued, on my Prayer seeking to declare Ram Setu as a National Heritage Monument under the Ancient Monuments and Archaeological Sites and Remains Act.

“This Prayer meets the criteria laid down in the said Act in Section 2 and that your Ministerial colleague Dr. Mahesh Sharma (Minister for Culture) confirmed this to me, stating that the decision is for the Cabinet to make. Therefore, I urge you that there should be no further delay in making the announcement that Government has decided to give recognition to the Ram Setu as a National Heritage Monument,” said Dr. Swamy.

READ ALSO  All Indians are one people with one DNA

On the formation of Administrative Development Council in Coorg, Dr. Swamy has stated in his letter, “In a breakfast meeting of our Party in the main Parliament Library in which Party President Amit Shah, H.N. Ananth Kumar (late), Home Minister Rajnath Singh and myself were present at the table, it was decided there that the Codava Tribe of the Coorg area of Karnataka should be granted their right of an Administrative Development Council within the State of Karnataka.”

“Codava people have contributed heavily to preserve the ancient culture of India against foreign invasions as well as provided many brave soldiers who rose by sheer bravery in performance to the highest level of the Army (for example the first Commander-in-Chief of Indian Army Field Marshal K.M. Cariappa). They want development of the hill area of Coorg through the Development Council because they have been exploited by people with black money in that part of India, for example by setting up a large number of coffee estates. Therefore, the Codavas must be granted this demand for self-development and sub-cultural protection, which is according to our party policy,” Dr.  Swamy said. “I hope you will instruct your office to see that both these popular demands are met during the next one week,” the letter stated.