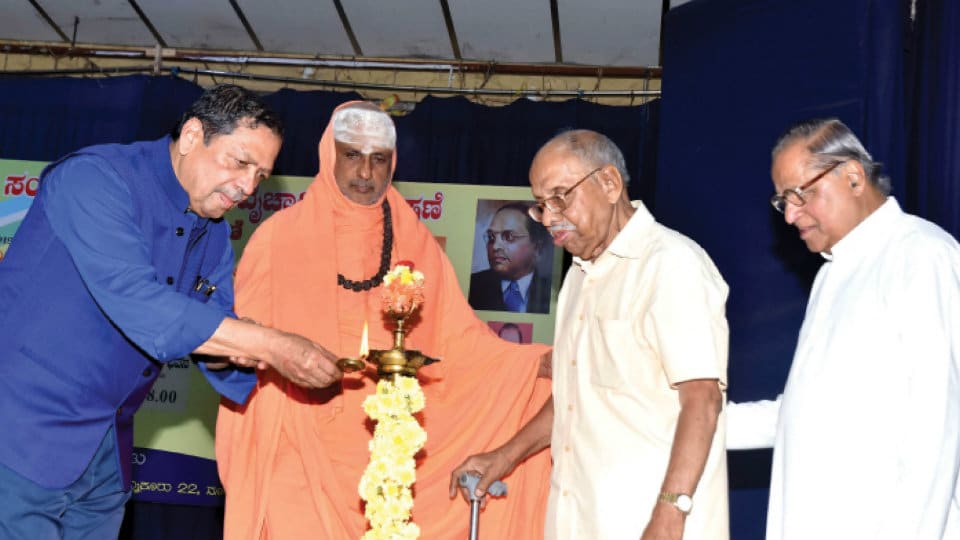 Mysuru: Regretting the erosion of human and social values in the society, former Lokayukta Justice Santosh Hegde said that corruption today has invaded all sectors of public life.

He was speaking after inaugurating a lecture series on ‘The Indian Constitution-An analysis’ organised by the city’s Parampare organisation at Naada Bramha Sangeetha Sabha on JLB Road here yesterday.

Noting that our neighbouring country China has introduced death sentence for corruption, Justice Hegde rued “India has been unable to tackle corruption.” Maintaining that corruption in our country cannot be rooted out by Laws alone, the former Lokayukta opined that the society can grow upwards only when there is a feeling of content and the intent for  human values.

Asserting that patriotism is very much part of democracy, Justice Hegde bemoaned that the fear of Laws was gradually vanishing among the perpetrators of corruption. Pointing out that the constitution of India has granted us the fundamental rights, he said that likewise, the Parliament and other legislatures have been granted powers to frame law and to ensure their compliance. As such, it is important that we respect the law and be rightful citizens of the country, he said.

Suttur Mutt Seer Shivaratri Deshikendra Swamiji, who graced the occasion, said that India was once a country that followed every principle of Dharma and Truth. But, the situation has completely changed now, with many people paying little respect to the term ‘Satyameva Jayathe’, which is really worrying.

He further said that rampant interventions of politicians has prevented the  enforcement of the law of the land against law-breakers and it was very much painful to note that law breakers are being received with warmth and affection.

Reknowned Legal Scholar Prof. C.K.N. Rja and others werer present. As part of the lecture series, eminent jurists and other personalities will deliver talks at 6.30 pm everyday till Nov.24.