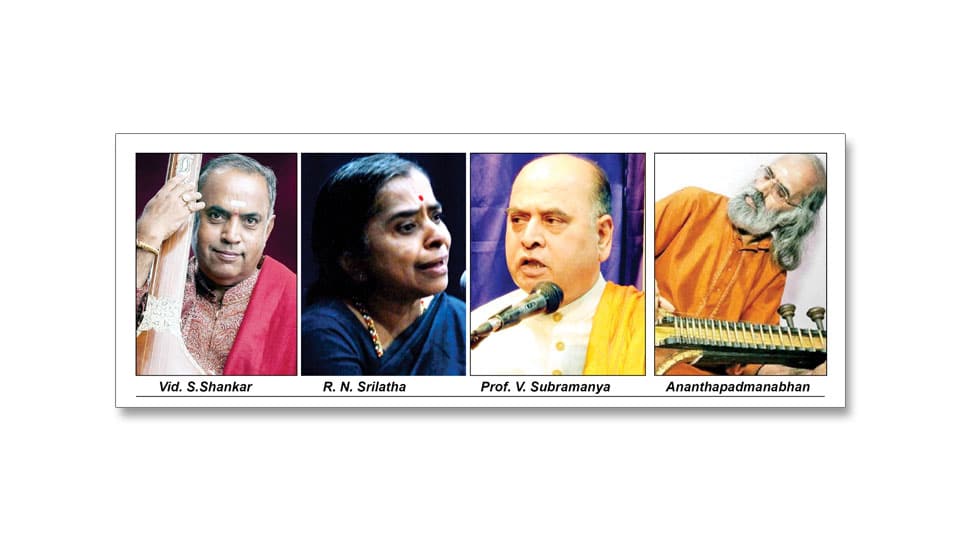 Ganabharathi has organised a two-day music festival on the occasion of Veene Seshanna Jayanti on Nov. 23 and 24.

On 23rd Saturday at 6 pm, Vidwan Sangeetha Kalarathna Prof. Mysore V. Subramanya will speak on Veene Seshanna’s life and achievement. This will be followed by a music concert by Vidwan S. Shankar accompanied by Vidwan Mysore N. Karthik on violin, Vidwan Anirudh Bhat on mridanga and Vidwan R. Karthik on khanjira.

On 24th, Sunday at 6 pm, Vidushi Dr. R.N. Srilatha will present a lec-dem on “The influence of Hindustani Music on Veene Seshanna.”

This will be followed by a Veena recital by Vidwan Ananthapadmanabhan. He will be   accompanied by Vidwan Tumakur B. Ravishankar on mridanga and Vidwan Sharat Kaushik on ghata.

Vidwan S. Shankar, a popular Karnatak vocalist and a vaggeyakara, is the disciple of his mother Rajamma Sastry, Nagarathna Bai and Vallabham Kalyana Sundaram. He is an ‘A top’ grade artiste at AIR and Doordarshan. He has performed all over the country and abroad.

He has performed jugalbandhi concerts with Hindustani vocalists. He has a number of cassettes /CDs to his credit. He has directed documentaries, dramas and musical features like “Mounadacheya Belaku – Life and Works of Sri Sadashiva Bramhendra” and “Vishwa Geetham – Life and Works of Mayuram Vishwanatha Sastry” for All India Radio. He has been honoured with titles like Sangeetha Saraswathi, Sangeetha Kala Ratna, Karnataka Rajyotsava Award, DD Chandana Award. As a revered Guru, he has trained many students.

The name is synonymous with the veena.  ‘A Top’ graded artiste of All India Radio (AIR) and a self-groomed Ananthapadmanabhan is the veena staff artiste of AIR, Kerala. His father, late T.S. Ananthakrishnan too was a good veena artiste. His father’s niece Gomathi Chidambaram too was an accomplished veena player.

After learning the basics from his father, he trained himself through practice that lasted for about six to seven hours a day.  He started playing the veena as a hobby and used to spend hours on saadhana/practice. He had great admiration for S.Balachander, the great Vainika and his “Gayaki Style” of playing. He considers him as his role model.

He can play both Karnatak and Hindustani ragas on veena; has directed ‘Triveni Sangamam’ — a confluence of Karnatak, Hindustani and Western music. He has toured extensively all over India and abroad; has taught many students. His son, a child prodigy, is a big name in the field of music. He has many awards to his credit.