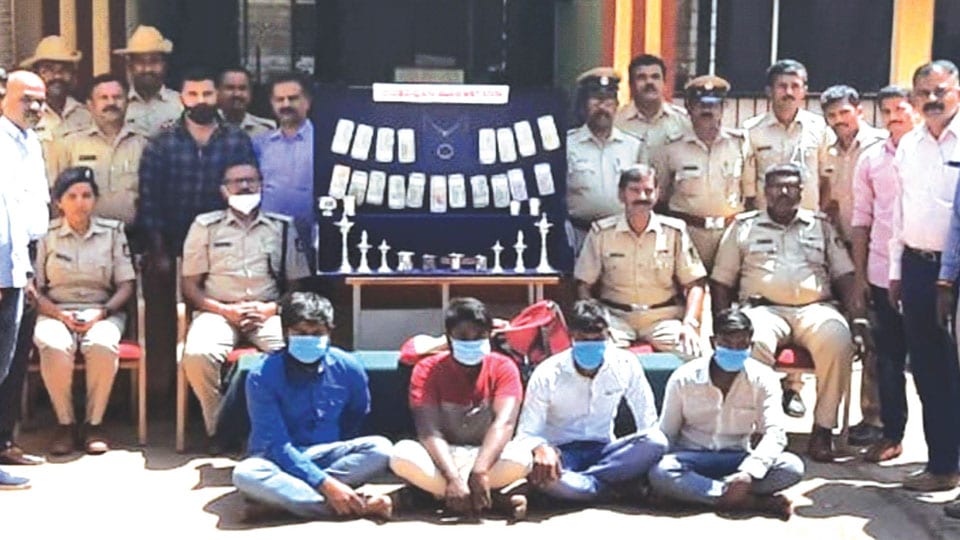 Journalist among five-member gang; one on the run

Mysore/Mysuru: Watching a doctor couple’s daily routine and movements closely, a gang of five men looted valuables worth Rs. 13.60 lakh from their house at Saraswathipuram after tying up their aged parents and two youths on Mar.17.

But the City Police managed to crack the case in six days and have arrested four accused while one is on the run. The breakthrough was achieved after the Police first picked up a journalist on Mar. 17 – the same day on which the crime was committed — for questioning.

The arrested have been identified as 25-year-old Naveen Kumar of Pandavapura and 30-year-old J. Ravi of Mellahalli near Varuna. They were picked up near Shaneeshwara Temple and based on the information provided by them, 33-year-old Satish alias Shashi was arrested near J.K. Tyres along with 25-year-old R. Avinash alias Abhi, a journalist and a resident of K.G. Koppal. He was arrested from the Ring Road signal on Nanjangud Road.

One more accused in the case has been identified as Umesh of Mellahalli and he is on the run. The Police have spread a dragnet to arrest him. The Police have seized Rs. 9,86,200 in cash and 42-gram gold ornaments worth Rs. 2,44,000 and 1.145 kg silver articles, one Volkswagen Polo car (KA-09-ME-0608) that was used in the crime along with one phone and a set of lethal weapons from them.

The five-member gang had barged into the house of a doctor couple — Dr. Dattatreya who runs Vani Child Clinic at Udayagiri and Kuvempunagar and his wife, who works as a doctor in a Women’s Clinic at Kuvempunagar — at Saraswathipuram Fifth Main, 12th Cross, Kamakshi Hospital Road.

The couple has a busy schedule and returned home late in the night. Their aged parents 87-year-old Vishwanatha Shastry and 79-year-old Padmavathi stay at home and the dacoits were observing the movement of the couple and their son Sumukh P. Shastry who was also a medical student.

On Mar. 17, evening, Sumukh came home from college and he later headed out to pick up his friend Akash from Akshay Bhandar as they wanted to study. While Sumukh and Akash were studying on the first floor of the house at around 8.30 pm, they heard hurried footsteps of a couple of people walking on the floor below where Sumukh’s grandparents were there.

In his complaint, Sumukh stated that hearing the sound, he and Akash went to open the door of their room when the five dacoits barged into the room flashing knives, screw-drivers, hammers and daggers. “They threatened us and tied us up with a mobile charging wire and also pasted plasters on our mouths after stuffing them with clothes. After some time, I managed to wriggle out of the knots and came downstairs along with Akash only to see my grandparents tied up. We released the aged couple and also removed the clothes stuffed into their mouths,” Sumukh stated in his complaint.

Sumukh told the Police that his grandparents told him that they had opened the door as they heard the doorbell ring at around 8 pm. The door was opened by the couple thinking that the doctors had returned from work. The dacoits had looted Rs. 10 lakh in cash, a gold chain weighing 70 grams and a gold bangle weighing 30 grams along with silver articles.