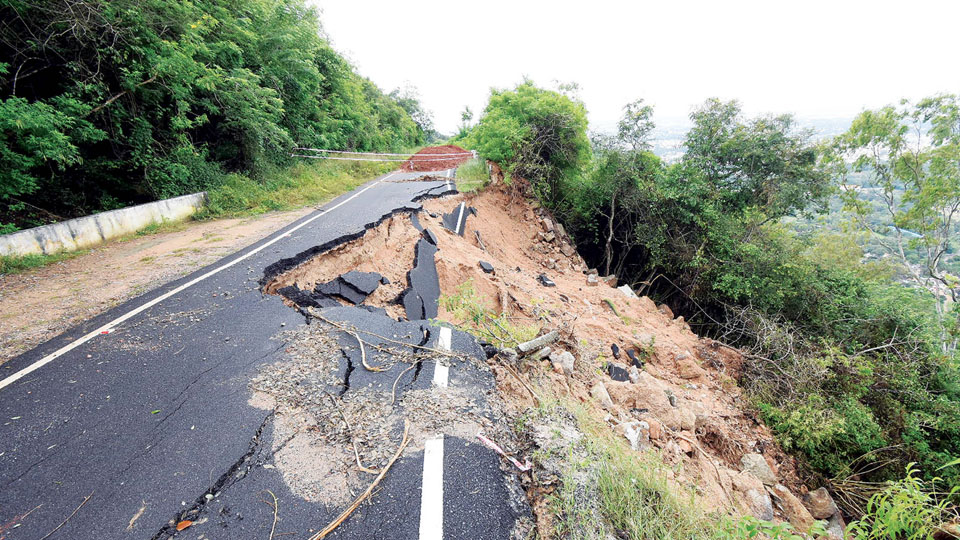 Mysore/Mysuru: A massive restoration work is in store for the Public Works Department (PWD) as the recent landslide that had occurred atop the Chamundi Hill — between View Point junction and Nandi Statue — has been increasing in width and has shrunk the road by over 80 percent.

When the landslide occurred on the night of Oct. 20, 2021,   30 percent of the road had caved in. It now has the potential of taking away the entire road if it rains heavily.

Due to incessant rains, the mud of the retaining wall has collapsed further, taking away most part of the road and the length of the landslip has increased to more than 120 metres. The 2019 landslide was measured at 50 ft. in length and 22 ft. deep and then, a 35-metre wide and 6-metre high concrete wall was constructed at a cost of Rs. 49 lakh.

Now both the estimate and the extent of the repair works will be more. Though the public have complained that the PWD has not taken any measures to prevent further damage even after 10 days of the incident, the officials have reasoned that as the rain continues to lash Mysuru they are not in a position to repair the stretch.

Public and residents of Chamundi Hill have expressed concern that if it rains heavily like it rained last week, the entire road might get washed away.

Morning walkers alleged that though the officers promised repair works the very next day of the collapse, nothing was done and even District Minister S.T. Somashekar visited the Hill and left without making any announcements, they said.

Not only this spot but due to continuous rain and relentless flow of water from atop towards the foothill, many stretches of the retaining wall have weakened with damages being reported at Uthanahalli Lake, Devikere and Tavarekatte that need urgent repairs, the villagers said.

Speaking to SOM this morning, PWD Executive Engineer Harsha said that they had apprised the Minister that it was not possible to undertake the works at this stage as it is raining heavily. “Repair works need heavy machinery and it is dangerous to go near the landslip area now. Works can start once the rain completely stops,” he said.

A team of geologists and earth scientists from Indian Institute of Science (IISc.), Bengaluru, visited the landslip area and they have given ideas to restore the caved in portion. “As the land has further collapsed with increased length, we will request the IISc. team to visit again after Deepavali and suggest restoration measures. Along with this stretch, we will also examine other vulnerable areas that require attention,” he added.

During his visit to Chamundi Hill yesterday, Minister Somashekar said that he had already spoken about the landslip with PWD Minister C.C. Patil and he is expected to visit after Deepavali. All possible steps will be taken to restore the road.

3 COMMENTS ON THIS POST To “From 30 percent on Oct. 20 to 80 percent on Nov. 2: Chamundi Hill landslide widens; road shrinks”