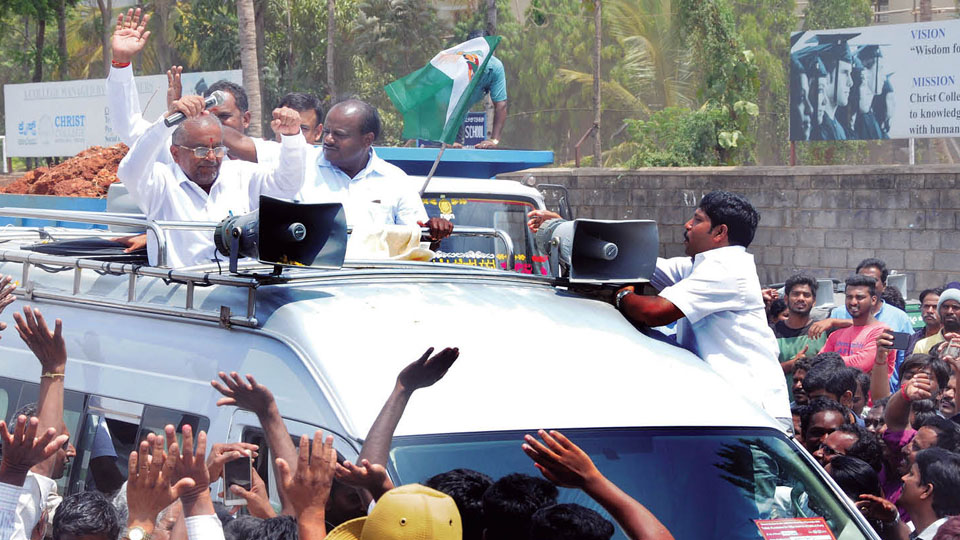 GTD, who took the lead in the first round of counting, consolidated his position as the rounds progressed and finally won by a huge margin.

Chamundeshwari has witnessed a keen tussle between sitting MLA G.T. Devegowda of JD(S) and Chief Minister Siddharamaiah, who chose to contest from here after giving up his Varuna Constituency for his son Dr. Yathindra.

This election is a waterloo for many Ministers in the Siddharamaiah Government who include Dr. H.C. Mahadevappa, H. Anjaneya, B. Ramanath Rai, A. Manju, Vinay Kulkarni, Pramod Madhwaraj, T.B. Jayachandra, Basavaraj Rayareddy, Dr. Geetha Mahadevaprasad, S.S. Mallikarjun and Sharan Prakash Patil among others losing  by big margins.

However, the BJP drew a blank in districts such as Mandya, Chikkaballapur and Kolar.

The BJP succeeded in retaining its hold over Bengaluru city, winning a majority of seats in the State Capital.

JD(S) State President H.D. Kumaraswamy, who contested from Channapatna and Ramanagar, won in both the seats comfortably.

CM Siddharamaiah, however, had a saving grace when he won from his second seat of Badami defeating his nearest rival B. Siramulu of the BJP in yet another high-voltage battle.