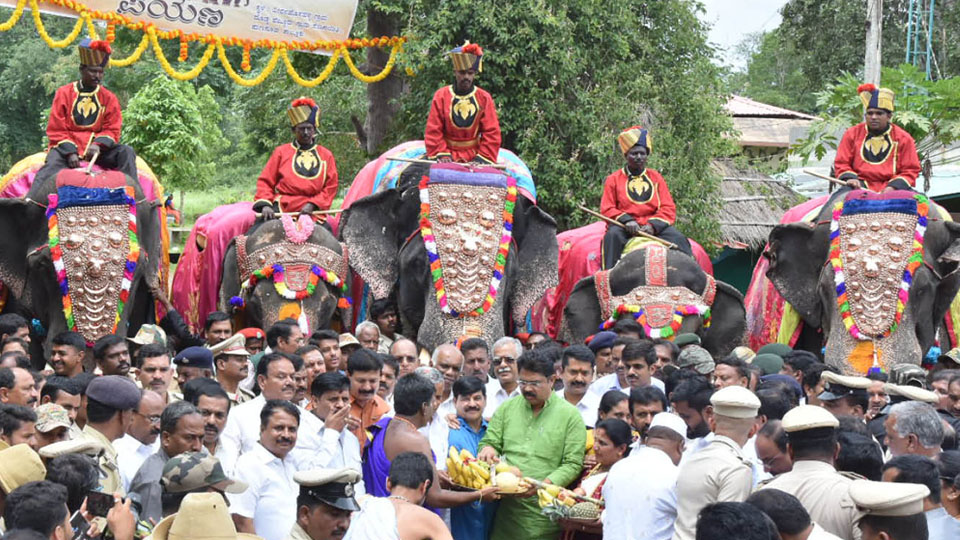 Mysuru: Signalling the official countdown to the famed Mysuru Dasara, the first batch of six caparisoned elephants led by the mighty tusker Arjuna — the Golden Howdah-carrying Elephant — embarked on Gajapayana, their journey from the jungle camps to the City of Palaces this morning.

The Gajapayana was flagged off at Veeranahosahalli on the outskirts of Nagarahole National Park. This signals the countdown for the Dasara festivities which will be held from Sept.29. The jumbos will take part in the Vijayadashami procession (Oct.8) to shore up the event.

Gajapayana is an age-old tradition which went out of vogue only to be revived about 15 years ago. It is now a symbolic event which was once an elaborate affair where the elephants, Mahouts, Kavadis and families used to travel over 60 kilometres from the forests to Mysuru by foot. But in the present times, the elephants and the entourage symbolically march a short distance after which they are transported by trucks.

Tracing the recent history of Gajapayana, it was in 2004 when Hunsur MLA (now disqualified) A.H. Vishwanath, as a Cabinet Minister, floated the concept of Gajapayana and implemented the same. The ceremonies used to be held at Nagapura Girijana Ashrama School. Since last year, the event is being held at Veeranahosahalli Gate.

Today’s ceremonial Gajapayana was flagged off by Minister R. Ashoka who came down from Bengaluru especially for this purpose. Due to political uncertainty, fall of Coalition Government, floods and landslides, there was a delay in formation of BJP Cabinet and it was perceived that the 2019 Dasara will be held without any leader and would be managed by MLAs and officials.

Minister R. Ashoka is the head

Interestingly, this time, all MCC Corporators were present. MLA Ramdas had brought two busloads of women from his Krishnaraja Constituency to watch the grand spectacle unfold. Former Mayor Sandesh Swamy was also present.

This morning’s puja was performed by priest S.V. Prahallad Rao who has been tasked with performing pujas to the Dasara elephants. The rituals began at 10.30 am at Abhijin Lagna. The traditional ‘Arashina Kumkum’ was sprinkled at the feet of the elephants. Later, the elephants were fed with ‘Modaka’ and ‘Pancha Phala’ (five fruits).

The Veeranahosahalli Gate where the elephants were sent to Mysuru and Nagapura Tribal Haadi and the Girijana School wore a festive atmosphere with tribals dressed up in their best costumes. A spacious area was created for a large number of people and stalls to be accommodated. A number of stalls selling clothes, trinkets, sarees, plastics, snacks and toys were set up and the place was nothing short of a village fair.

After the stage programmes where dignitaries will address the gathering, the elephants, Mahouts, Kavadis and their family members will leave for Mysuru at 4.30 pm and will be housed at Aranya Bhavan, the Forest Department Office in Ashokapuram. The pachyderms are likely to be moved to the Palace on Aug.26 after confirming the timing with Palace authorities.