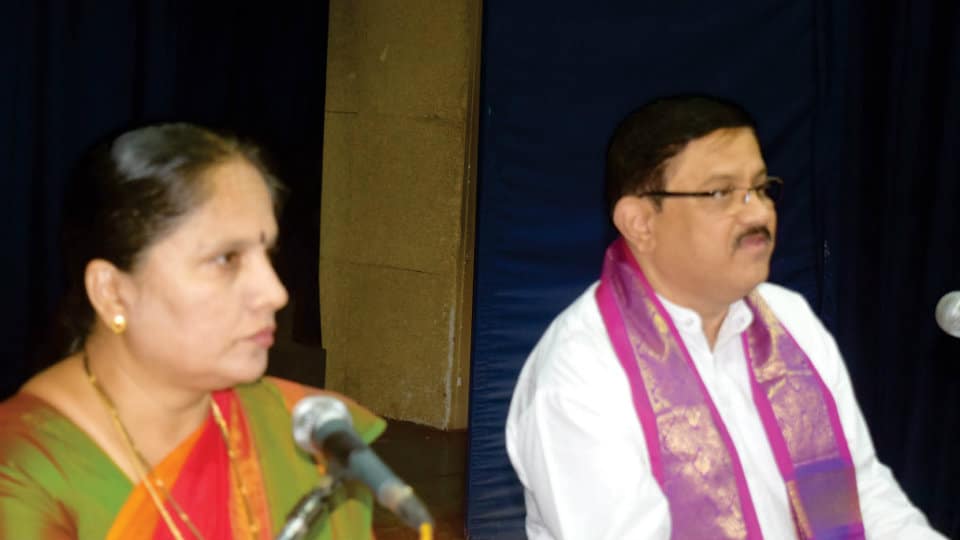 Gamaka is a form of both music and literature. It is a beautiful combination of both. But the emphasis in Kaavya Vaachana is on literature (Sahitya) and not on music where the singer splits compound words in poems to make it easier to understand. All musicians cannot render Gamaka and so it is true with vice versa.

On the 15th of November, Nadabrahma Sangeetha Sabha celebrated Kanaka Jayanti  by organising a Gamaka – Vyakhyana programme by two leading Gamakis of Mysore — Dr. Jyothi Shankar and Dr. Kabbinale Vasanth Bharadwaj on Kanakadasa’s ‘Nala Charitre.’ Both the artistes have done immense work in the field of Kannada Literature. Their passion for the same was evident throughout their essay.

Kanakadasa has developed the story  of Nala – Damayanthi from the Mahabharata.  Nala, the king of Nishada kingdom, is known for his culinary expertise and for his skill with horses and cookery. He marries Princess Damayanthi of the Vidarbha kingdom, who chooses him as her husband in the Swayamvara.

Obsessed by the demon Kali Purush, who vows to divert Nala from the path of Dharma and to separate him from Damayanthi, Nala gambles away his wealth and kingdom to his brother Pushkara. Sending the children to her father’s kingdom through a charioteer, Damayanthi follows Nala to the jungle.

While in jungle, under the influence of Kali again, Nala deserts Damayanthi while she is sleeping and goes away. In the jungle, he saves Karkotaka Naga from a fire, who, in turn, helps Nala to serve Rituparna, the king of Ayodhya as cook and charioteer.

In the meanwhile, Damayanthi searches her husband in panic and eventually reaches her father’s kingdom. She declares an award for anyone who finds her husband and gets to know about Nala, who is in the disguise of Bahuka. Damayanthi sends a riddle to King Rituparna to confirm her husband’s presence there.

READ ALSO  'Ramayana' as a tribute to Lalgudi Jayaraman

On hearing that Damayanthi is set to marry again, Bahuka (Nala) drives to Vidarbha with King Rituparna in his chariot, reaches Vidarbha, both recognise each other and unite. Now Nala has to regain his kingdom from his wicked brother Pushkara. He invites him for a game of dice again in which he is now thorough, staking his wife and kingdom and Pushkara loses everything and becomes Nala’s slave. Nala forgives him and Kali and gives back his brother’s kingdom.

Kali, satisfied that Nala never left the path of righteousness, offers him a boon that whoever reads his story is not unduly affected by the malefic effects of Kali. Nala and Damayanthi beget two children, a boy named Indrasena and a girl also named Indrasenaa.

The third canto from the book was chosen for the evening. Nala, impressed by hearing about Damayanthi’s beauty, has fallen in love with her without seeing her. While he is pining for her in his garden, a group of swans living in the lake of the garden sees Nala’s state and the leader of the group offers to help Nala by carrying his message to Damayanthi. After about a week, Nala is happy to hear from the swan that Damayanthi is also in love with her. A swayamvara is arranged. But the news of the swayamvara reaches the heavens as well, where Indra, Agni, Yama and Varuna, also impressed by Damayanthi’s beauty, descend on the earth to marry her. Indra threatens Nala that he should plead with Damayanthi to choose one of the demi-Gods in the swayamvara or he will have to face dire consequences. A day before swayamvara, Indra transports Nala to Damayanthi’s Palace using his divine power.

Damayanthi’s joy on seeing Nala and Nala’s interpretation of Damayanthi’s beauty is best explained in glorified language by Kanakadasa. Nothing could dissuade Damayanthi from garlanding Nala in the swayamvara. A galaxy of Princes gather at the ceremony. To her astonishment, Damayanthi sees five Nalas in the hall. Realising that the demi-Gods were trying to trick her, she recognises the real Nala as the four others do not blink but the fifth one does. She garlands him and the demi-Gods bless the couple and go back to heaven.

Both Jyothi Shankar and Vasanth Bharadwaj mesmerised the listeners with their powerful rendition. Suitable ragas were selected by Jyothi for effective rendering. Bharadwaj explained the meaning of each stanza with examples and anecdotes.

Kanakadasa is easy to render and to understand and the couple did a great job of it. The joy of the elite audience was evident in the hall throughout the rendition.