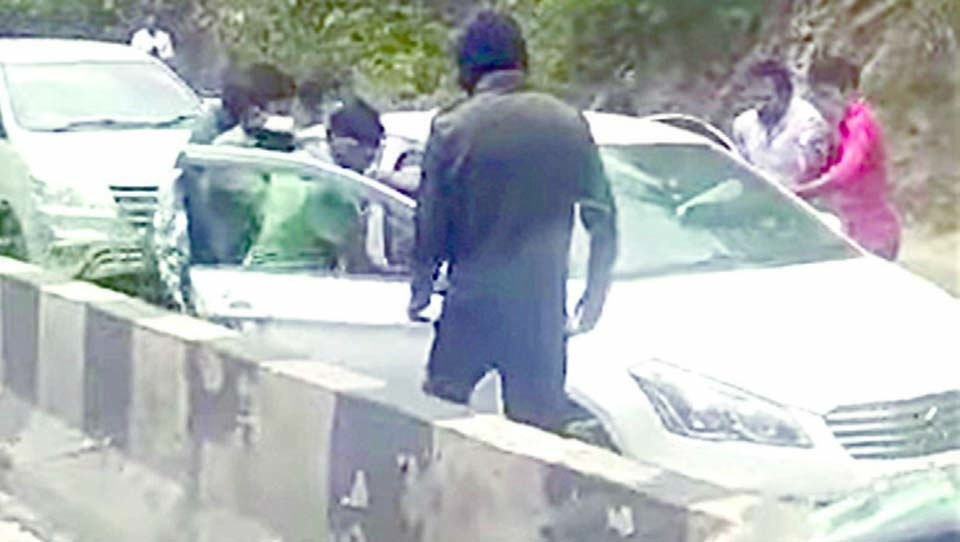 Gang waylays car in full public view; flees with it

Passers-by shoot videos of the incident on Nanjangud Road; gang was wielding sticks

Mysuru:  A gang of masked and stick-wielding men waylaid a car near Kadakola on Mysuru-Nanjangud Highway in broad daylight. They blocked the car, forcibly opened the door, tried to assault the car occupants and finally drove away along with the car.

Passers-by in trucks and other vehicles shot the video and the footage has gone viral now. Though it is not clear when the incident occurred, the Police have launched a probe seeing the video on social media platforms.

The car, which was proceeding towards Mysuru from Nanjangud, was being followed by the gang in another car. When the car reached a point near Kadakola, the miscreants got down from the other car, ran towards the car that was moving ahead.

Shocked by the waylaying, the car driver tried to flee from the spot but was caught and the miscreants pushed him inside the same car and drove away. The car in which the miscreants were following too sped away. A few bus and truck passengers shot videos of the incident.

Realising that the place of the attack came under their jurisdiction, Mysuru South Rural Police went to the spot and questioned certain shopkeepers and others but have not got any definite information. Moreover, neither the victims nor any witness have approached the Police.

Mysuru South Rural Inspector Shashikumar told Star of Mysore that it is only known that the car, coming from Kerala side, was followed by the gang in another car. “No one has lodged any complaint and there is not a single clue. At least if we come to know about the date and time of the incident, it will be easy for us to check CCTV footage. There are chances of the video being an old one too,” he said.

Superintendent of Police R. Chetan said that the incident has been taken seriously. Pointing out that they have got the information about the registration number of the car, the SP said that the owner of the car would be traced and will be probed.

Many illegal activities and transportation of hawala money by certain Kerala-based persons were leading to such incidents, say sources. As it is illegal money, no complaints are lodged.

Even in the past there were many such cases where vehicles bound to Mysuru from Kerala or vehicles heading towards Kerala from Bengaluru were targeted where cash and jewellery were looted. Some have even driven away the cars leaving the occupants stranded on the roads. A few such cases have been registered at Gundlupet Police Station.

In such a scenario, the investigation is handed over by the Police to the Income Tax Department or the Enforcement Directorate to trace the real source of the money.

Mysuru-Nanjangud Highway
Boy writes SSLC exam despite his mother’s death
MCC: Are you ready for disaster management this monsoon?