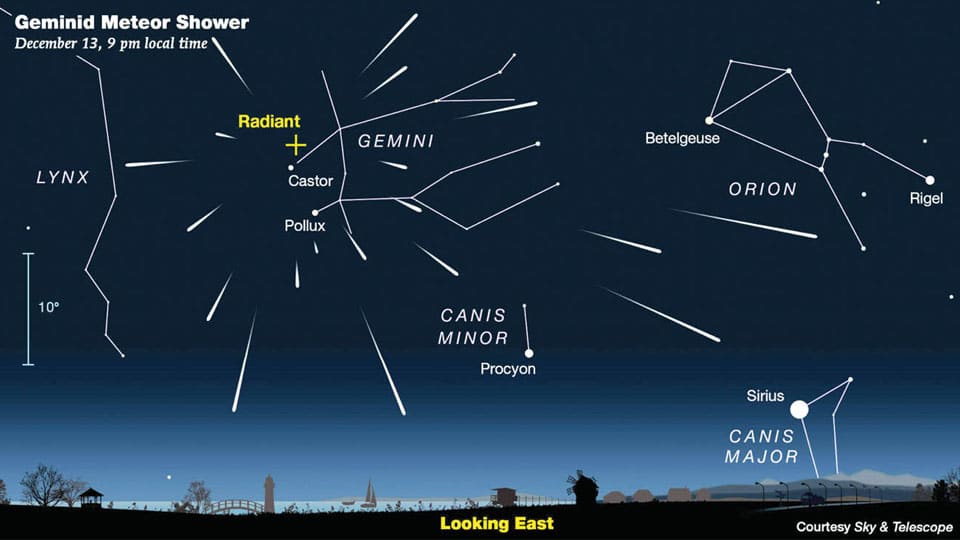 A ‘shooting star’ or ‘meteor’ is caused by a tiny particle of dust entering Earth’s atmosphere. As it plunges downward, it experiences collision with air molecules and the friction generated causes the particle to glow and eventually burn up completely. Most meteors burn up at altitudes of around 100 Km. It is an exceptional celestial manifestation for sky observers that the extravagant yearly ‘Geminid’ showers will illuminate the night sky on Dec. 14. The Geminids are beautiful, prolific and reliable shower.

Dry, clear air will help a lot with the lunar glare, but it will be difficult to achieve maximum rates of 100 to 120 Geminids/hour even at the best sites. The shower has a skew rate profile, with activity dropping speedily after maximum. At the same time, the proportion of bright meteors is higher during and after maximum than on pre-maximum nights. The Geminids are worth watching for one or two mornings before the peak; there will be slightly less moonlight interference.

This time in India, Geminids are clearly visible in the night sky during 10 pm to 6 am.

Studies illustrate that the Geminids are rich in slow, bright, graceful meteors and bright fireballs, as well as faint meteors, with relatively fewer objects of medium brightness. But for the visibility of Geminid Meteor Shower, there is absolutely no difficulty at all. The night sky is completely free from moon and eventually may be possible to witness these meteor streaks.  Peak activity is projected to fortuitously occur at or near 3 to 4 am on Dec. 14. Under normal conditions on the night of maximum activity, at least 60 to 120 Geminid meteors can be expected to burst across the sky every hour on the average.

To see maximum number of meteors, go to a dark sky as far away from lights as reasonably possible. Allow time for your eyes to become adapted to dark. Use a red flashlight for light to preserve your night vision. Look up in the direction of the constellation Gemini or can look in the eastern half of the sky. No telescope or other optical device is needed. In fact telescopes or binoculars will limit stargazers making it nearly impossible to observe meteors.

The Geminids are accessible from the entire Northern Hemisphere and from many Southern Hemisphere locations as well. The radiant is highest in the sky at around 2 am, but from mid-northern latitudes it is at a decent elevation from around 10 pm until the beginning of morning twilight.

A productive Geminid watch can actually begin as early as 8 pm local time, because the showers radiant is already fairly high in the eastern sky, passing very near overhead. The higher a showers radiant, the more meteors it produces. The track of each one does not necessarily begin near Castor, nor even in the constellation Gemini, but it always turns out that the path of a Geminid extend backward along the direction of flight passes through a tiny region of sky about 0.2 in diameter. As such, this is a rather sharply defined radiant, as meteor showers go, suggesting the stream of space debris that fuels this shower is relatively young, perhaps a several thousand years old. Geminids stand apart from other meteor showers. They seem to have been spawned not by a comet, but by 3200 Phaeton, an asteroid that crosses the path of Earth’s orbit. Geminids may be comet debris. Some astronomers consider Phaeton to really be the dead nucleus of a burned-out comet that somehow got trapped into an unusually tight orbit around the Sun.