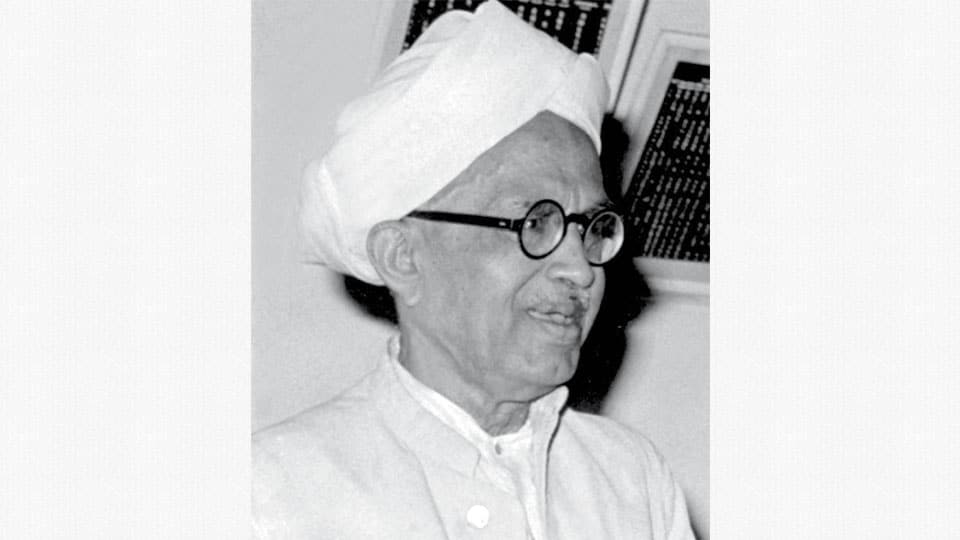 Vi. Si.’s Bombay sojourn would come to an abrupt end owing to an unrelenting bout of malarial fever. He rushed back to recuperate. After a prolonged convalescence, he was all set to head back to Bombay. His long-time well-wisher and mentor  T.S. Venkannayya persuaded Vi. Si. to drop his Bombay plans and stay back. Vi. Si. thankfully agreed to this.

He once more joined Sarada Vilas High School in Mysore as a Kannada teacher. He taught here from 1923 till 1928 and all the while contributed regularly to ‘Prabuddha Karnataka’, ‘Aruna’, ‘Rashtra Bandhu’ and ‘Artha Sadaka’.

After B.M. Srikantaiah was appointed Registrar of UoM in 1927, he began to scout around for the right people to populate the newly commissioned Kannada Department. This was with an eye to start an M.A. course in Kannada at the University. T. S. Venkannayya was among the first to be selected for this new Department. Even though Vi. Si. was an ‘Economics’ man by training, his proficiency in Kannada was well-known to B.M. Srikantaiah and thus he was able to convince Vi. Si. to accept a Lecturer’s position in the Kannada Department at Bangalore Central College. Vi. Si. taught Kannada at Central College from 1928 till 1942. Following a promotion in 1943, he returned to Maharaja’s College, Mysore where he continued till 1948. For the next two years, he was requested to head the Intermediate College at Chikamagalur first as Superintendent and then as Principal. From 1950 onwards, he would head the Kannada Department at Central College till his retirement in 1955.

Following his retirement, Vi. Si. joined Akashvani Bangalore as producer of ‘Spoken Word’ series from 1956 till 1958. From 1964 till 1968, he headed the newly established Arts and Science First Grade College at Honnavara as Principal. In 1968, he was recalled to Bangalore at the behest of India Book House (IBH) for a mammoth project to encapsulate all of Kannada poetry from Kaviraja Nayakara (Nrupatunga) to Navodaya’s Muddanna! This almost encyclopaedic endeavour was entrusted under Vi. Si.’s leadership and he succeeded in bringing out a collection of 30 books titled “Kannada Kavi Kavya Parampare.” This bears testament to his Editorial capabilities.

V. Seetharamaiah was a man of short stature and rather frail constitution. His typical everyday attire would include a neatly pressed white dhoti (Kache Panche), a woollen coat, turban (Mysuru rumalu), black rimmed spectacles and a soft pair of sandals. Always genteel in his manners and soft spoken, Vi. Si. was best described by D.V. Gundappa when he remarked: “He is goodness personified.”

T.S. Venkannayya, a well- wisher and mentor to Vi. Si. was a regular visitor at his Bangalore residence. Venkannayya was a very tall man and had to bow down to prevent his head from striking against the door frame of Vi. Si.’s house at Chamarajpet. This was unacceptable to Vi. Si. and he went out of his way to get the whole door frame removed and replaced with a wider, taller one, just so that his mentor and friend could come in without having to bow down every single time! Such was his spirit of generosity. To paraphrase one of his friends:  “Vi. Si. was generous to the extent of ruining himself!”

Vi. Si. married Sarojamma in 1925. They had seven children. Their fifty years of marriage came to an end in 1974 when Vi. Si. lost his wife to ill health.

Vi. Si. travelled widely within India, even visiting Rabindranath Tagore’s Shantiniketan. His visit to UK in 1974 — the culmination of a life-long desire to visit the land of Shakespeare, Chaucer and Milton — sadly wasn’t a happy one! Upon his arrival in London, Vi. Si. suffered a debilitating stroke and was hospitalised for a fortnight. He could see precious little of the many places he had so zealously wanted to see all his life. He returned to India gravely disappointed.

Vi.Si. published his first Kannada poem as well as his first work of Kannada prose in ‘Prabuddha Karnataka’ under the aegis of A. R. Krishna Shastry. Vi. Si. himself would eventually assume Editorship of ‘Prabuddha Karnataka’ later on. For a period spanning fifty years, Vi. Si. churned out nearly sixty works which included  8 anthologies of Kannada poems,  36 works of Kannada prose, 10 translations from English to Kannada and 10 biographical sketches written in English. This was in addition to his vast Editorial work which included the likes of “Kannada Kavi Kavya Parampare”. He always remembered the trio of Masti Venkatesh Iyengar, D. V. Gundappa and Panje Mangesha Rao as the ones who really groomed his literary career. Vi. Si. was a regular contributor to periodicals like ‘The Hindu’, ‘Deccan Herald’, ‘Indian P. E. N.’, ‘Aryan Path’ and ‘Triveni’.

Vi. Si. chaired the Poetry division of Kannada Sahitya Sammelan held at Karwar in 1931, when he was just 36 years old. He presided over the 36th Kannada Sahitya Sammelan at Kumta in 1954.  Vi. Si. was a honorary member of “P. E. N. Kendra Sahitya Akademi Prashasthi Committee” as well as the “Jnanpith Prashasthi Committee”. He was awarded the ‘Kannada Sahitya Academy Award’ in 1973.  He received Festschrift volumes  ‘Vi Si’ and ‘Vi Si – 75’ replete with contributions from literary stalwarts of his time. UoM conferred on  him a Honorary Doctorate (D. Litt) in 1976.

This great soul, the very treasure of the world of Kannada literature, breathed his last on Sept. 4, 1983 at Bangalore, aged 83 years.

He lives through his many books, heartfelt poems and scores of students who had the rare privilege of benefitting from his humane, enriching and remarkable tutelage. This is a small tribute to Vi. Si., a rare gem in his own right. May we see more of his kind. He was, indeed, goodness personified.